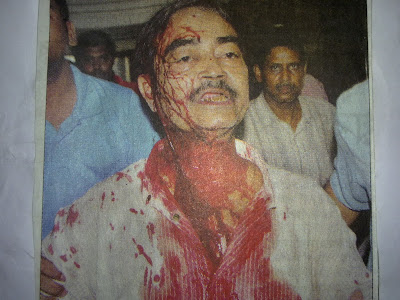 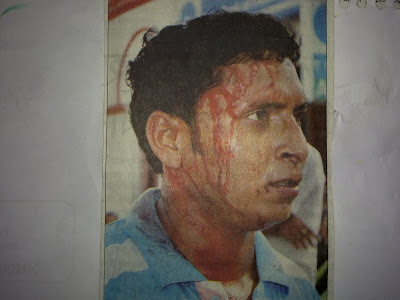 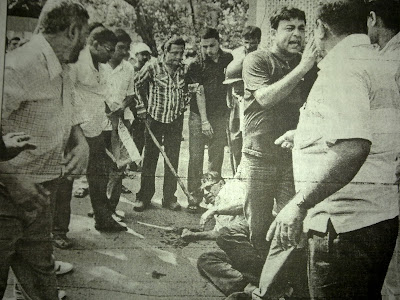 
Comrades,
You are already aware that on 3rd June, Central Govt Employees' Coordination Committee convened a protest meeting at Nizam Palace, Kolkata, against the forceful occupation of the CPWD union's office room by the Trinamool Congress sheltered union.
During the protest meeting, the TMC activists & miscreants with the connivance of their union suddenly attacked the assembled comrades including postal of Kolkata Divisions, with sticks & rods without any provocation. Many of the leaders & comrades were serious injured & bleeding profusely. Com. Pijush Roy, General Secretary, CGCC, was innjured.Com. Swaraj Kar, General Secretary, CPWD Workers' Union, Com. Tapas Das, Com. Goutam Pramanik, Com. Sunil Roy and many others were seen bleeding. They all were rushed to hospital hastily. Presently they are in stable condition and have been discharged.
Police, no wonder, were present there, but did not take any action during the brutal attack. Later, local O.C. (Bhabanipore P.S.) appeared & arrested 4 TMC miscreants. But it is obvious that to please the present administration, they did not differentiate between the attackers & the attacked, and arrested 2 CPWD employees also.
The NFPE Group of unions, West Bengal Circle, do not have adequate language to condemn the brutal attack and the violation of democratic right to protest, which the presently ruling political parties and their followers intend to reign with. We, also with the CGCC, convene a demonstration tomorrow at all Central Govt Department Branch/ Divisional Headquarters, from which a savingram has to be adopted and sent to the Prime Minister, India and the Chief Minister, West Bengal.
The text of the savingram is given below :