You are well aware that the Postal Department has ordered migration of all POSB accounts and operations, Insurance work involving PLI and RPLI to IPPB. In fact, other than core postal operations everything else is now going to be under control of IPPB management, not under DOP. Even the control over CEPT is being awarded to IPPB and staffs from DOP will also be ordered to work in IPPB. These disastrous steps which will finally finish the future of POSB and in the name of flourishing IPPB it will only legalizethe grip of corporate over huge amount of hard earned money of the common people as invested by them in POSB since its introduction.

Central PJCA (NFPE & FNPO) has already recorded its protest against this planned move to corporatization. 👇 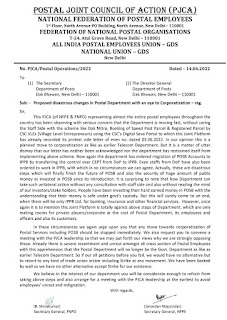 As per the decision of PJCA, a lunch hour demonstration programme will be held on 22nd June,2022 in all big offices of Postal/ RMS/ MMS/Admin/ DAP throughout the country and one resolution would have to be moved, adopted and sent to the Secretary Post and Director General Post. 👇 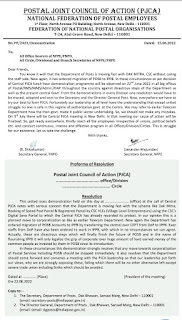 In these circumstances, it is our understanding that except united struggle no one is safe in the regime of this authoritarian government at the centre. So you all are requested to organise demonstration in every division and also be a part of the massive demonstration called by the PJCA on 22nd June,2022 at Yogayog Bhawan, Kolkata at 5:00 PM.

After demonstration, a rally will also be organised from Yogayog Bhawan to Esplanade. 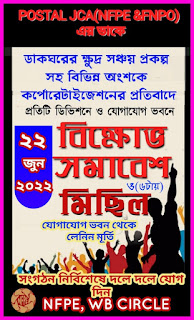 Let us fight unitedly and stop these moves for
our own existence. As representatives of postal employees, we believe it is our responsibility to respond to the wise call of the PJCA at this moment.
We oppose transfer of POSB to IPPB
We oppose privatisation of Postal Department
Save postal services, Save the people
Posted by AIPEU Group 'C' WB Circle at 2:50 AM