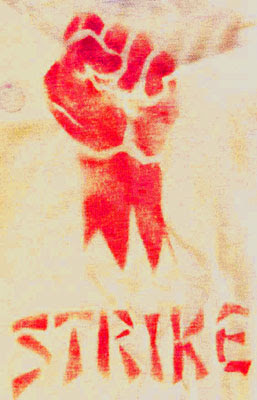 WORKING  CLASS  AND  POSTAL  EMPLOYEES  OF  WEST  BENGAL  HELD  THE  FLAG  OF  STRIKE  HIGH : SERIES  OF  THREATS  AND ATTACKS  : CONDEMN  THROUGH  DEMONSTRATION  ON  2nd/3rd  MARCH  IN  ALL  DIVISIONS
The working class including our employees has entered a new era of struggle against the anti-people policies of Central Govt. through unique success in 28th Feb,2012- strike. In West Bengal the State Govt and the Administration practically took drastic stand against the strike and measures to break strike by any means. Being encouraged the main ruling political forces also induced anarchism throughout the state. But the fact is that in spite of severe threats and mental pressure, the success of to-day’s strike is unprecedented.
In our jurisdiction, truly speaking we are proud of our employees. We are really happy to convey our comradely greetings and Red Salute to the postal employees. It is mainly our brave comrades, organizers working in different branches/divisions in an alarming state of affairs and our general employees irrespective of unions took part in strike and made it a grand success. As per the official communiqué, 90% of the employees including GDS in out Circle  participated in strike directly. Com M Krishnan, our beloved Secretary General has also conveyed his congratulations and red salute to us.
It is our experience that for last 4/5 days the ruling political force has been threatening the employees in work-spots and residences to open the Post Offices on 28-2-2012. In the last 30 to 35 years it is new phenomenon that the ruling party has perpetrated hooliganism against the Govt officials who supported the strike. Midnapore H.O., Siliguri H.O., Baruipur H.O., Chinsura H.O., Arambag H.O., Contai H.O., Malda H.O., Burdwan H.O., Purulia H.O. etc. are such examples where the concerned Postmasters were compelled to open the Post Offices under the pressure and threats. But even in these offices almost all the officials refused to attend the office and firmly took part in strike.


Role of Police :
We are surprised to note that in case of Moynaguri S.O. under Jalpaiguri Dn, the Police behaved as like as ruling political forces. At the dictate of that force, the police rushed to the residence of striking Postmaster, picked him up and paved him to open the office . Here also the employees remained absent from office taking part in strike. Now the serious question is that whether the Police can act in such a manner as they did in Moynaguri. Obviously not. So what will be the future of law and order situation in our state ,we can easily guess. Almost same are the experiences we gathered in PSD Kolkata, Durgapur H.O., Belghoria H.O., Chakdah S.O., Nalikul S.O., Tarakeswar S.O., Mohanpur B.O. ( Contai Dn).
Political Hooliganism 1 :
In Belghoria H.O. , when the Postmaster was attacked , Com Rina Saha our beloved leader came hurriedly from her house to rescue the Postmaster. We are shocked to mention that she was also attacked and hackled by the miscreants. Finally the office was opened , but neither Com Rina Saha nor concerned Postmaster deviated from their stand and took part in the strike. May be the restraint of Com Rina Saha has been hurt, but her unique role is encouraging to all of us.
Political Hooliganism 2 :
In Tamluk Divn , 50/60 miscreants rushed to the residence of Com Jitendranath Hatai, President of P-III, Tamluk (NFPE). But at that time he was not available in his house, but other members including his wife and two daughters were available. Without caring the female members those miscreants broke the house of Com Hatai to take revenge only because Com Hatai took part in strike. Red salute to Com Hatai that even after this torture on him or his family , he refused to open Tamluk H.O. and finally, Tamluk H.O. was not opened. Same pressure was also to open Srirampore H.O., but it is our comrades and employees who did not bend down under tremendous pressure and finally kept Srirampore H.O. closed.
Circle Office :
Yogayog Bhawan, our circle head quarters was opened , but except a few higher level officers, the staff of Yogayog Bhawan did not turn up and took part in strike spontaneously.
MMS/RMS/DPLI/PAO :
In MMS/RMS, DPLI and Postal Accounts also most of the employees participated in the strike ignoring the threats.
Brave Comrades in far-flung areas :
In Sikkim Division also, the strike was almost 100%.
The Assessment
The alarming incidents we have faced today exposed the anti-working class as well as anti-democratic attitude of the ruling political forces in West Bengal. There are sufficient reasons to apprehend that this will be intensified. We, the working class have to prepare ourselves to fight against any kind of draconian attack.
In respect of all India scenario we have received so far, the strike of the whole working class is a great success and the role postal employees have played to participate in the strike is historic one .We convey our heartiest greetings to Federations and JCA and to the general employees.
The Program in Condemnation :
Protest against the above mentioned incidents in WB Circle. Hold massive demonstration (DHIKKAR SABHA) at recess hours on 01-03-2012 or 2-3-2012 at every work spots and send savingram to CPMG, Respective PMG and Head of the Divn.
Text of the Savingram

“APPROPRIATE STEPS TO TAKE ACTION AGAINST THE POLITICAL HOOLIGANISM FACED BY THE POSTAL EMPLOYEES IN CONNECTION WITH 28th FEBRUARY 2012 STRIKE CALLED BY JCA AAA ALL CROSS SECTION OF THE POSTAL EMPLOYEES ARE VERY MUCH AGGRIEVED AAA ALSO DEMAND PREVENTIVE MEASURES.”
(President of the meeting)
NB: Divl Secretaries are requested to take the programme seriously and also requested to send a detailed report in respect of 28th Strike to the each circle union within short period. All Divl/Br Secys are requested to bring these incidents to the notice of general members.
Posted by AIPEU Group 'C' WB Circle at 11:58 PM