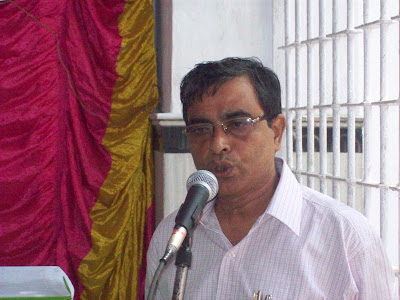 COMRADE MRINALKANTI ROY CHOWDHURY, OUR SECRETARY OF ALIPORE H.O. BRANCH AND A DEDICATED TRADE UNION SOLDIER, HAS BREATHED HIS LAST ON FEBRUARY 14, YESTERDAY,  AT 11-25 P.M. IN A SOUTH KOLKATA HOSPITAL. ALL CIRCLE UNIONS REQUEST TO WEAR BLACK BADGE ON THE NEXT WORKING DAY IN REMEMBRANCE AND MOURNING OF OUR BELOVED AND RESPECTED COMRADE.
SOFT-SPOKEN, JOVIAL AND DEARLY COM. MRINAL DA ATTENDED THE PUNE ALL INDIA CONFERENCE WITH US WITH A HEALTHY CONDITION. BUT IMMEDIATELY AFTER COMING BACK, HE WAS DETECTED SUFFERING FROM CANCER AT THE TERMINAL STAGE. HE WAS TAKEN TO TATA MEMORIAL HOSPITAL, MUMBAI, BUT THE DOCTORS GAVE UP. HE LOST HIS BATTLE AGAINST THE SILENT DISEASE LAST NIGHT, SURVIVED BY HIS WIFE, SON, DAUGHTER-IN-LAW, DAUGHTER AND GRAND DAUGHTER. WE HAVE NO WORDS TO CONVEY OUR CONDOLENCES TO THE BEREAVED FAMILY.
Com. Mrinal Roychowdhury, born on 05.3.1953, started his career on 01.8.1970  as Boy Messenger at Basirhat In undivided South Presidency Division. He was promoted to clerical cadre on 24.11.1974.  Later, he preferred transfer to Alipore H.O. under Rule-38 and joined there as P.A.(Signaler) on 01.5.1993. He always remained a reliable activist of our organisation and finally, shouldered the responsibility of the Secretary of Alipore H.O. till his parting day.
Com. Mrinal Da, 58,  was one of the most-seen faces in all organisational programs at Circle & All India levels. He was also among the very few personalities around us in these days who could attract people on the first day with his soft,  cheerful and friendly approach. Despite being a Branch Secretary, he was far from any publicity or loudness. But his inert strength was manifested when under his leadership, the courageous comrades of Alipore H.O. time & again barricaded in front of the reactionist forces. In his last days, he actively contributed and helped other division's comrades to get different paper formalities completed from judicial authorities of Alipore.
With his untimely and unanticipated demise, we all have lost a selfless comrade with an everlasting smile on his lips.
RED  SALUTE  COMRADE  MRINAL  ROY CHOWDHURY.
Posted by AIPEU Group 'C' WB Circle at 3:30 PM No comments: