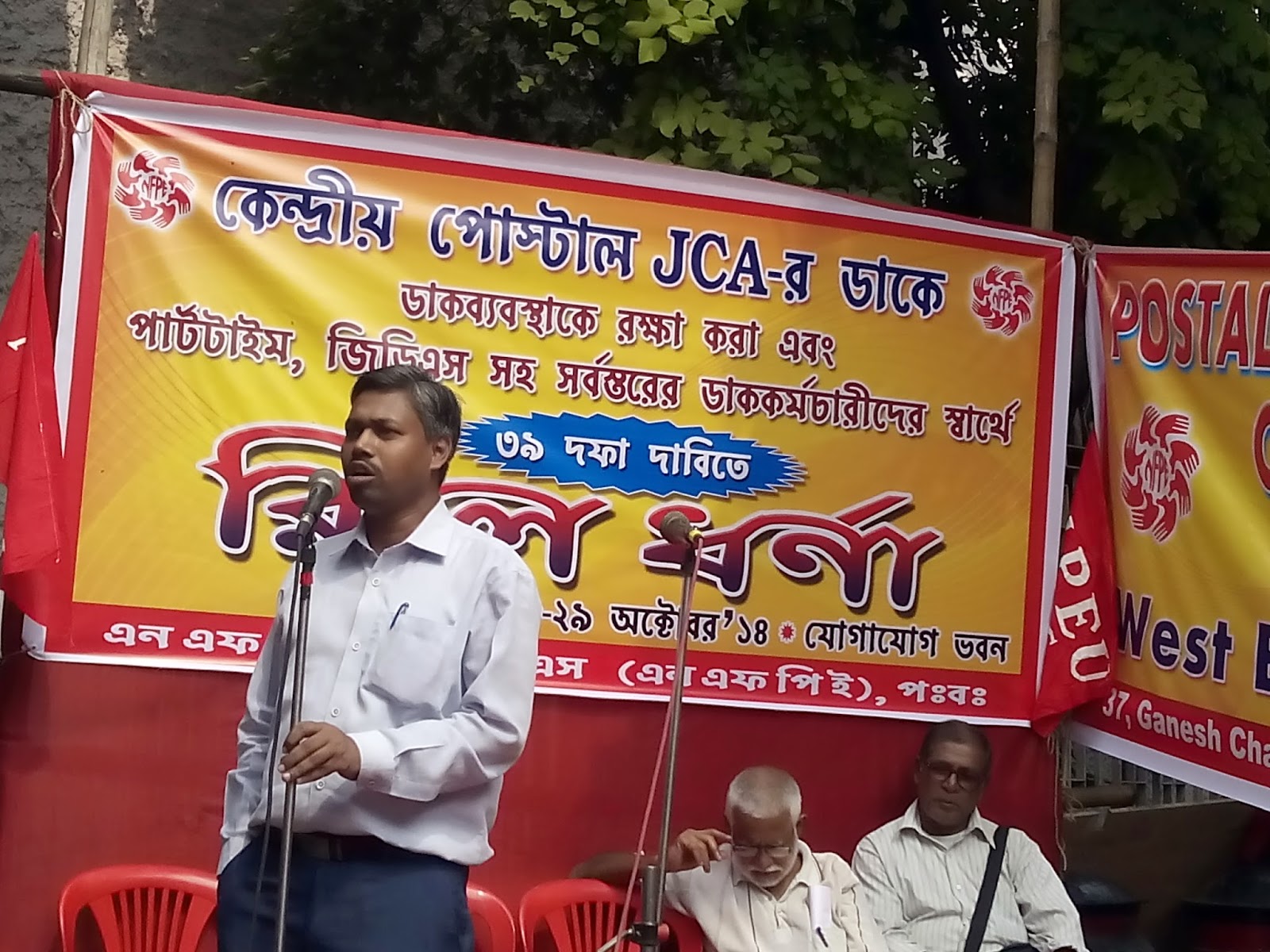 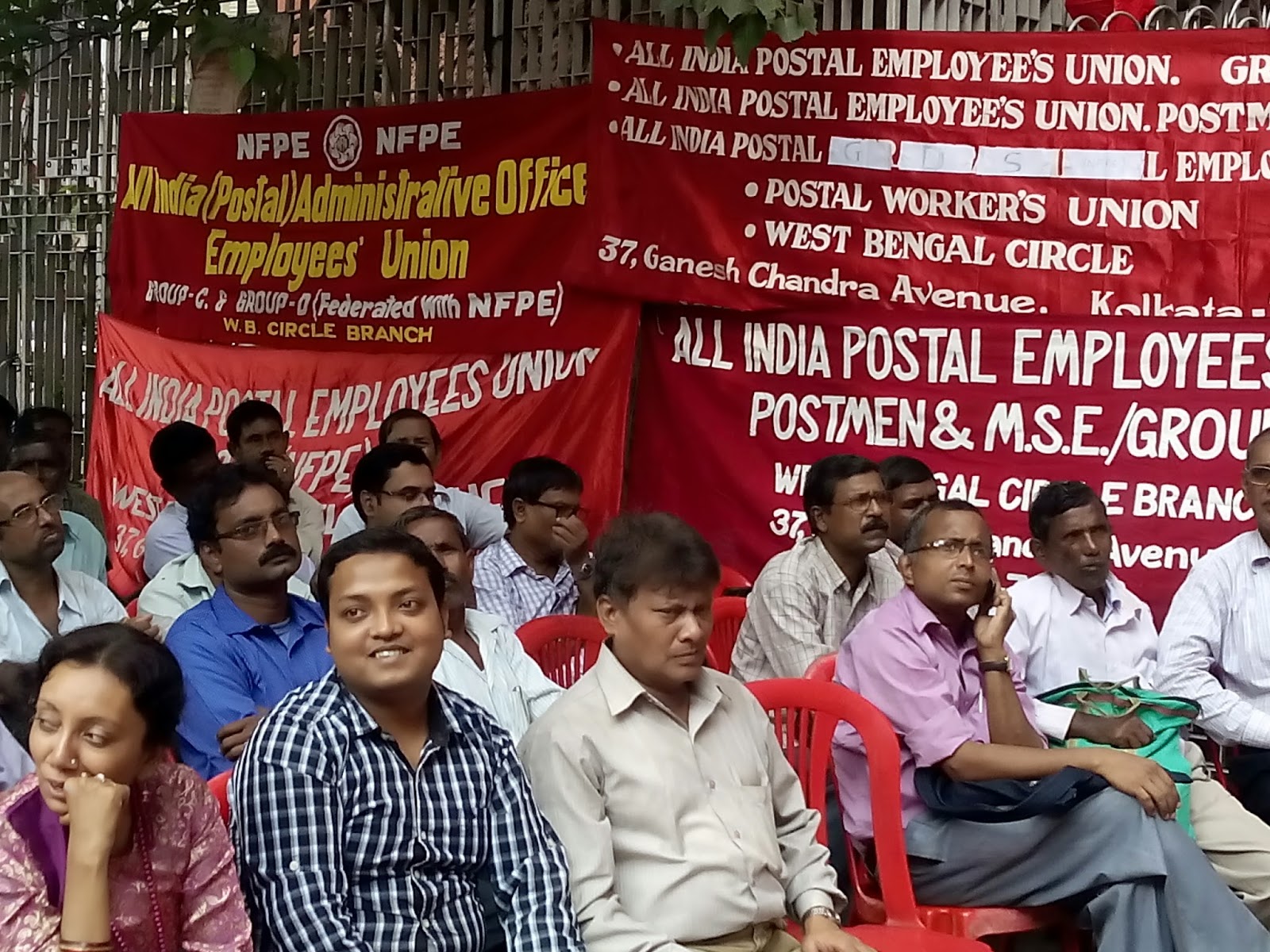 PROGRAM  OF  POSTAL  JCA  RESCHEDULED  IN WEST  BENGAL  CIRCLE : PLEASE  FOLLOW  THE  MODIFIED  PLANNER  GIVEN  BELOW

On consideration of certain aspects of the situation, the program of the Central Postal JCA, as declared by West Bengal Circle Unions through 'SANGRAMI DAK', has been modified and rescheduled. The program will be held on 28.10.2014 and 29.10.2014, each day from 11 A.M. to 5 P.M. The allotment of divisions on the above dates has been decided as ----

The program is organised by NFPE Group of Unions and GDS(NFPE) of West Bengal Circle. Other wings will also participate.
Posted by AIPEU Group 'C' WB Circle at 12:31 PM No comments: 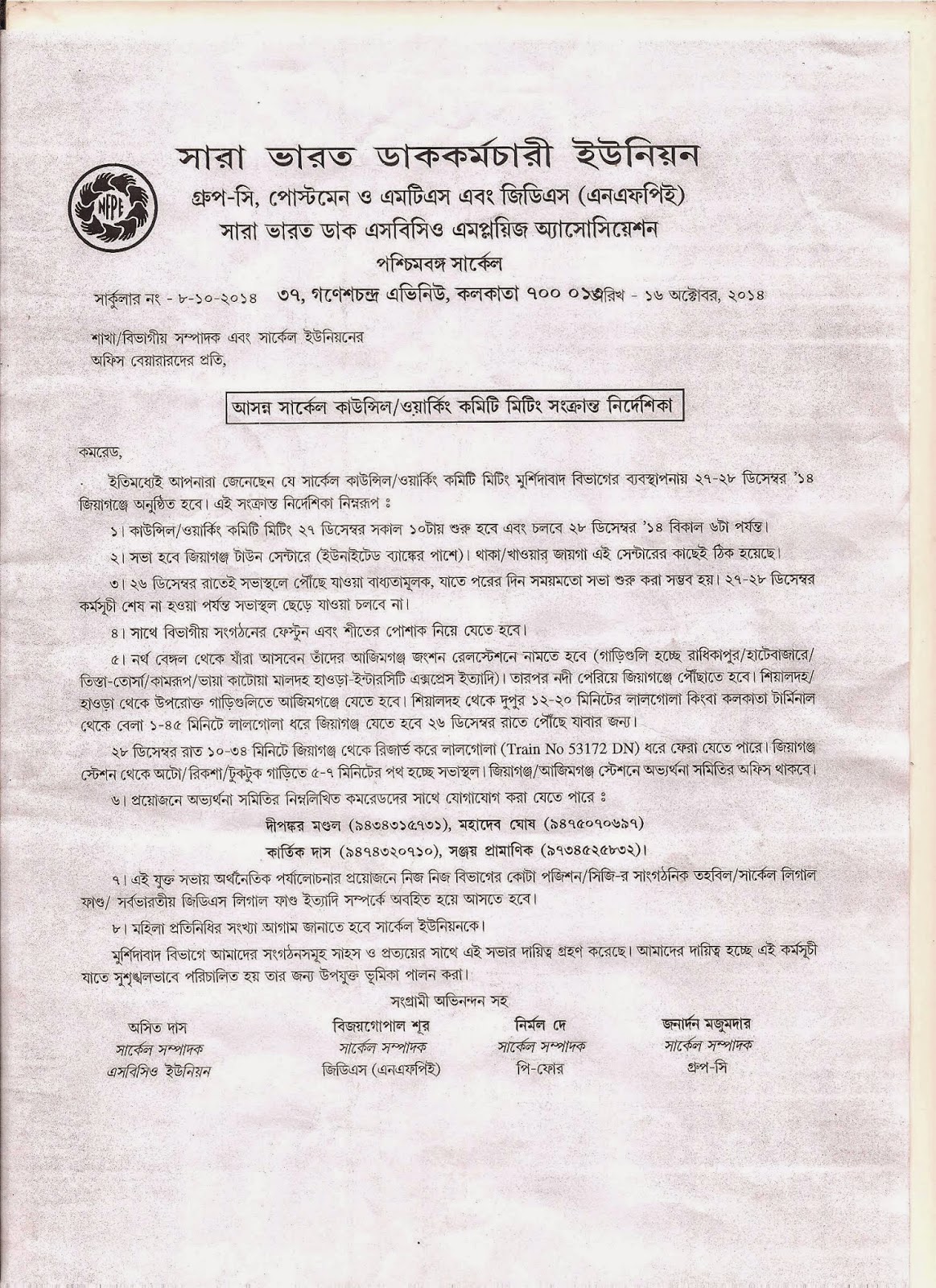 Circle Union's zonal committee meeting of Midnapore zone was held at K.G.Basu Smriti Bhavan, Contai on 12.09.2014. The meeting started after paying homage to the martyrs and was inaugurated by Com. Nirmal Dey, C.S., P-IV. Guidelines and items for discussion was narrated by Com. Janardan Majumdar, C.S., Group-C. Com. Mukul Das presided over the meeting. Financial Secretary of Group-C Circle Union Com. Manoj Shaw was present and deliberated, so did the leadership of the Pensioners Association of Contai. The program was very nicely arranged by Contai, the host division. The meeting was successful despite bad natural condition due to impact of 'Hudhud'.

Decision was taken to strengthen movement at zonal/circle levels on individual issues of staff, service related problems, corruption, irregularities and malpractices of the administration. A suitable time will be fixed to launch an intense and bigger organisational program at Tamluk involving zonal and circle levels as a part of such movement. Circle Union will finalise the details of such programs after discussion. The zonal meeting will be held after 3 or 4 months. A Trade Union Study Camp may be organised during the next zonal meeting.

From the meeting Com. Ashis Dutta (Contai), Com. Bharat Bauri (Purulia) and Com. Nripen Mahato (Midnapore) have been entrusted with the responsibilities of zonal conveners of GDS, P-IV and P-III respectively.

The discussion and interactions in the meeting were quite informative, thorough and comprehensive. Circle Unions have assessed that the divisional leaders have also enriched the circle unions with their observations on certain points. We are inspired and determined to move on to hold and continue such programs. 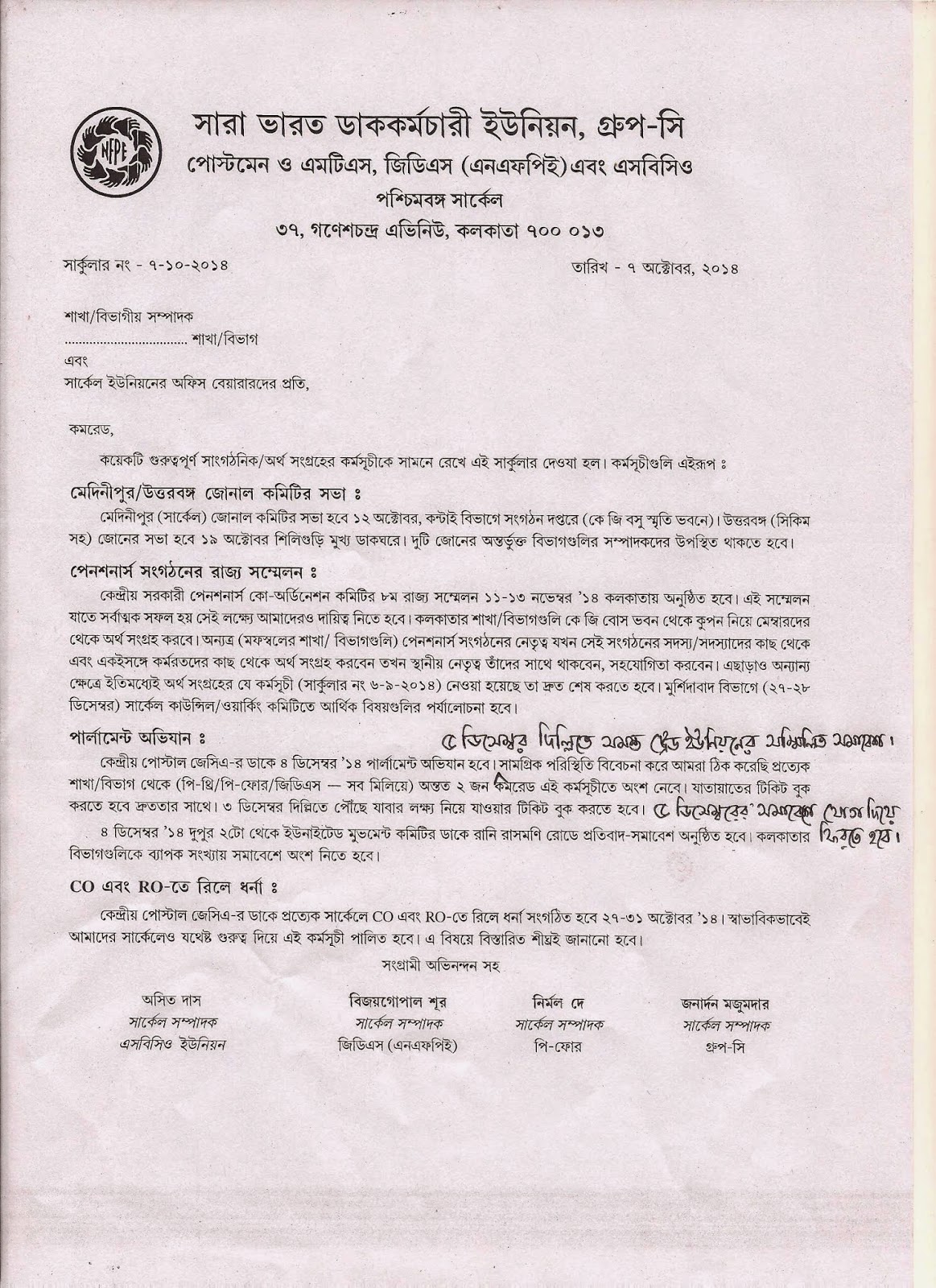 The Circle Administration has recently issued the order of Compulsory Retirement from Service against Sri Samir Chakraborty, P.A., Kolkata GPO and former President of our Group-C union, Kolkata GPO branch. He was proceeded against on the false charges of misconduct while pursuing to keep the establishment of Kolkata GPO intact opposing the unjustified efforts of the administration to abolish/divert posts from there and other staff demands in the chamber of the then Director, Kolkata GPO on 28.9.2010. He was earlier awarded the punishment of stoppage of next increment for six months without cumulative effect by the Disciplinary Authority (Ad-hoc) disposing the Rule-14 proceedings against him. The Appellate Authority (Ad-hoc), DPS, Kolkata Region, reviewed the case suo-moto and enhanced the punishment to CRS with an absolute vindictive and vengeful attitude. As Comrade Chakraborty was the President of the GPO Union at that time, he has preferred an appeal ahainst the earlier punishment to the President of India as per rule (which is one of the privileges of office-bearers of union) which is still pending. But DPS (KR) has passed this order without caring for a decent wait for the order of the President of India.

Our comrades may remember that this DPS (KR) has taken an anti-NFPE stance since his inception of charge. Circle Unions had to protest his actions and behaviour from the very beginning. We also staged demonstrations against his actions and corrupt practices while he was temporarily in charge as Director, Kolkata GPO. Due to our strong demonstrations and facts, the then Chief PMG was compelled to withdraw him from that post. Naturally, apart from discharging the role and responsibilities of an appellate authority, he also has some personal agenda and grudge behind these orders against our members. He also issued same order against our comrades of North Presidency Division.

Thus, this punishment order has obviously been issued to create an environment of panic and fear psychosis among the staff, with the ulterior motive to pacify movement and protests of our organisation. We are sure that our comrades would neither be panicked nor such atrocious attacks of the administration could make NFPE surrender before them. Our glorious legacy proves that such attacks strengthened NFPE more and staff unity reached a peak through protest movements.

The Circle Union calls upon all divisional and branch unions to stage a lunchtime demonstrations on Thursday or Friday (8th or 9th October) to pass a resolution against this action and demanding immediate cancellation of this order by the intervention of the Chief PMG, West Bengal Circle. The resolution should be faxed to the Chief PMG (033-2212-0811) and PMG, Kolkata Region (033-2212-0077). Mobilise maximum number of comrades in this program to exhibit our resentment against the atrocities of the administration and protesting the effort of a section of officers to destabilise the harmony between administration and staff in our circle.

**** Text of the resolution ****
This joint demonstration of NFPE Group of unions, ......... division/branch strongly condemns the unjustified, biased and atrocious order of compulsory retirement against Sri Samir Chakraborty, P.A., Kolkata GPO and the then President of AIPEU Group-C of Kolkata GPO, issued by the DPS, Kolkata Region, and demands immediate cancellation of the C.O. order no. Vig/Z-2/1/14/S.Chakraborty/Appeal dated 08.9.2014 communicating the order.

This demonstration hopes that the new Chief PMG, West Bengal Circle will review the situation realistically and impartially and will pass a judicious order cancelling the punishment to maintain the harmony in our circle intact, otherwise there will be no other alternative but to launch intense trade union movement throughout the circle.
(sign. of the President)
****  ****  ****
Posted by AIPEU Group 'C' WB Circle at 5:14 PM No comments:

WORKSHOP  ON  5th  OCTOBER  FOR  TYPE & DATA-ENTRY  TEST  FOR  CANDIDATES  OF  POSTAL  ASSISTANT  EXAMINATION
As notified in this blog earlier, this Circle Union (AIPEU Group-C, affiliated to National Federation of Postal Employees alias NFPE, the largest union of Postal Employees in India) has arranged the workshop for type and Data Entry Test for the candidates for recruitment in Postal Assistant cadre on 5th October 2014, 1-00 P.M., at Tarapada Memorial Hall, 37 Ganesh Chandra Avenue, Kolkata-13. You can register for participation by clicking here : http://aipeugrchowrahdiv.blogspot.in/p/study-camp-registration.html

Please note that the objective of this workshop will be to explain the nature of the test and some useful tips will be discussed in the workshop which would help the candidates facilitate their preparation and effectively reproduce their abilities in the test.

For accurate direction of the venue (Tarapada Memorial Hall, on first floor of Calcutta Postal Club), please click on the link of Google Map below. You can track it from your Tab or smart phone or simply note the landmarks on a piece of paper. For easy reach, please drop or reach North Gate of Chandni Chowk Metro Rail Station (facing Yogayog Bhawan and Air India Office) and locate Khadi Gramodyog Bhavan. Walk along the same footpath leaving Gramodyog Bhavan on your left hand side and turn left reaching the first crossing.

As expected and discussed in our earlier blogs, all divisional/unit heads have received yesterday the circular for taking pledge of Swachh Bharat Mission on 2nd October. As we assured our comrades, there is no modification/change in the holiday. Attendance also is not mandatory. The pledge will take place at 9-30 A.M.

Yesterday in the late hours, leader of the staff-side Com. Pranab Bhattacharya has met the Chief PMG Smt. Arundhaty Ghosh and handed her over the letter issued by us (given below). He has explained the difficulties of the situation to her, which she was already sufficiently aware of. We are optimistic that the administration will approach and deal with the situation realistically.
Posted by AIPEU Group 'C' WB Circle at 2:07 AM No comments: