PROGRAMS  OF  NFPE  IN  PROTEST  OF  PART TIME  WORKERS'  DEPRIVATION
Our comrades are well in knowledge of the long deprivation of the Part-Time & Contingent-paid workers of Dept of Posts. Wages of all categories of employees have been revised through the 6th Pay Commission & GDS Committee. But the Central Govt, despite several sorts of communications and movements, did not show any sympathy to the justified and legitimate demands of wage revision to the Part-time & Contingent-paid workers of our department. Rather, many orders have been issued during this time with the clear intention to abolish their posts gradually.
In these days of consistently steep price-rise, neither their wage has been revised, nor their Dearness Allowance is increased since July 2008. They are working by our side watching us to enjoy the increased D.A. & wage.
NFPE has called upon us to hold two programs on 10.02.2011 & 03.03.2011 protesting the reluctance and delay in granting the justified financial benefits to these colleagues. On 10th Feb, all divisions will hold demonstrations at their headquarters and on 3rd March, a demonstration will be floored at Yogayog Bhaban (Circle Office).
All organisers are requested to prepare and observe the above programs with due importance and provide necessary assistance to the divisional Part-time organisation to mobilise.
Posted by AIPEU Group 'C' WB Circle at 4:23 PM No comments:

HOLD  DEMONSTRATION  AGAINST  THE  WAY & POLICY  OF  PAY-CUT  FOR  7th  SEPT 2010  STRIKE
This is already under the notice of all organisers and our members that the department has ordered to deduct one day's salary for our strike on  7th September 2010. Some over-enthusiastic divl administration have  even issued letters to our members marking the day as 'unauthorised absence'.
Let us first make it clear that we never think or demand that the department will pay us for a day of strike unless it is regularised by leave through  amicable discussion and decision. But we are strongly against the way  the authority is behaving and their policy of implementation of the pay-cut.

Then again, our federation served strike notice to Directorate. So, the question of unauthorised absence is irrelevant and illogical. Secondly, if anybody faced any difficulty to enter the office or perform office duty on any day, he/she should intimate the authority on the very next day. But here the administration is asking the staffs after four months about their difficulties.Thus, the administration is purposefully encouraging the non-strikers and trying to create a fear-psychosis. Thirdly, all rulings of Govt and the Supreme Court direct to deduct pay on 'No Work No Pay' basis, but our dept is deliberately violating it repeatedly.
So, the Circle Unions have decided to hold demonstration in all divns tomorrow at lunch-hours and sent the following resolution. We are also considering legal aspects of the situation .
RESOLUTION DATED 25.01.2011
This mass demonstration of all cross section of postal employees under NFPE ( with EDE), ..............division notes with serious concern that the orders have been issued at all levels inviting leave applications from the employees taking part in Postal Strike on 07.09.2010. To our opinion, this is highly irregular and clear instance of administrative interference into trade union rights. In no circumstances, the administration should move  beyond its jurisdiction.
This is our further opinion that the absence of the officials from duty on 07.09.2010 is not at all unauthorised as formal Strike notice was served to the competent authority by our federation (NFPE) & its affiliated organisations under the provisions of the Industrial Disputes Act. It would not be out of place  to mention that the department had never declared the strike unjustified.
This demonstration, therefore, resolves that the day should not be treated as unauthorised absence and the principle of 'No Work No Pay' should be maintain ed in general. This demonstration further resolves that the administration should refrain from taking any unauthorised and irregular activities to avoid serious staff resentment .
(Signature of the President of the  meeting)
Posted by AIPEU Group 'C' WB Circle at 10:59 PM No comments: 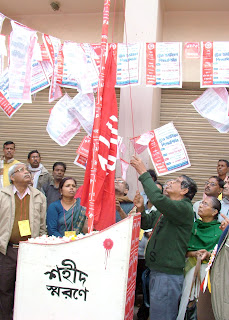 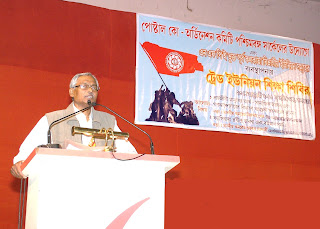 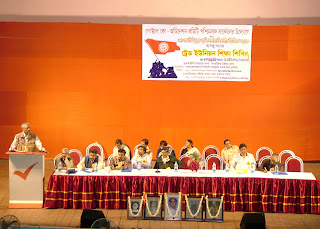 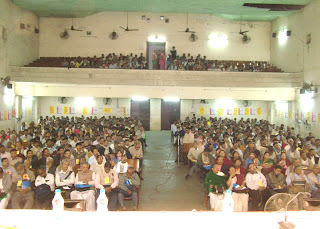 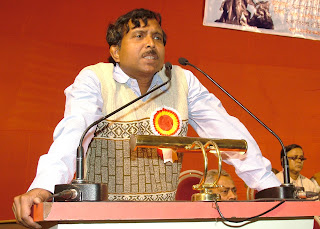 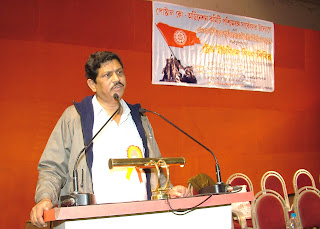 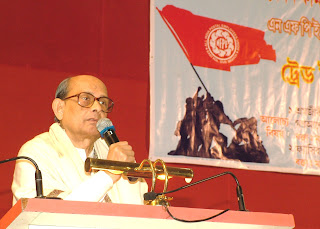 NFPE Group of Circle Unions of West Bengal, under the banner of Postal Coordination Committee, held the Trade Union Class today, as notified, at Shramik Mangal Kendra, Kankurgachi, Kolkata.
Com. Nirupam Sen, Hon'ble Minister of Industry & Commerce, Govt. of West Bengal, delivered his speech on the topic 'Movement of The Working Class : Role of The Left Front Govt.'. Prof. Dr. Subhankar Chakraborty spoke on the topic 'Fascism & Th eThoughts of Rabindranath Tagore'. Both the topics had their relevance in the present times and the speakeres were authorities on their subjects. Naturally they mesmerized the audience during the two sessions of the class.
East Kolkata, the host division, was very particular in management of the event. 592 comrades participated from all over the circle in today's class. The whole program was disciplined as per the tradition of our circle.
Both the speeches have been video recorded. All comrades are requested to place requisition to collect the video CD from Circle Union or Com. Uttam Pal (9432801013) and ensure sincere efforts for wide publicity.
Posted by AIPEU Group 'C' WB Circle at 10:08 PM No comments:

CIRCLE  UNION  CONGRATULATES  ALL  DELEGATES  OF  WEST  BENGAL  CIRCLE  TO  THE  28th  ALL  INDIA  CONFERENCE  FOR  THEIR  PARTICIPATION  AND  CONTRIBUTION
Posted by AIPEU Group 'C' WB Circle at 5:24 PM No comments:

THE RULE-37 TRANSFER ORDERS ARE NOT GETTING INTO EFFECT AT KOLKATA G.P.O.  THE CIRCLE ADMINISTRATION IS RECONSIDERING THE ENTIRE SITUATION TO FIND AN ALTERNATIVE TO RESOLVE THE COMPLICATION. THE DEVELOPMENT IN THE SITUATION TOOK PLACE AFTER ALL STAFFS OF KOLKATA GPO STARTED A TOTAL PEN-DOWN FROM 31.12.2010 MORNING AT THE CALL OF THE CIRCLE UNIONS. NORMALCY HAS BEEN RESTORED AT GPO AT ABOUT 1:30 P.M. WHEN ALL WERE BACK TO WORK AFTER THE RETHINKING BY THE ADMINISTRATION.
On an overall assessment of the situation, the Circle Unions finally decided to take a program of total pen-down at Kolkata GPO alongwith demonstration at C.O. and in all divisions at lunch hour in demand of withdrawal of the orders of Rule-37 transfer. Accordingly, all staffs of GPO refrained themselves from work from the morning. The huge response to the call showed the level of grievance of the staffs against the administration. Counter functioning, mail & delivery, even plying of cash vans were stalled affecting other divisions also as it was the pay day.
When the Regional administration took the matter up early in the day with the Circle Union, we only wanted to know from the Regional PMG that why such a drastic action was required when a discussion between the Circle Unions and administration was going on to clinch the issue. In discussion, the PMG, Kolkata referred to the 'Letter Incident' of Union Home Minister P.Chidambaram to Sri Buddhadeb Bhattacharya, C.M., West Bengal as an instance of present poor service of Kolkata GPO. The Circle Union firmly replied that it was a separate case and to mix it up with the present one was an absolute injustice (you may please remember that the Rule-37 orders were issued in respect of the alleged unpleasant incident with the Director, GPO).
The discussion failed with the stubborn stance of the Regional Administration. The pen-down went on.
Shortly after this, the Chief Postmaster General, Sri S.K.Chakraborti invited the Circle Union leadership for a discussion. The Circle Union presented its observation that there was no such situation which required harsh orders like Rule-37 transfers now in the earlier case. In the case of delayed delivery of the Home Minister's letter  ---- we have still to wait to see what comes out in the inquiry. But it appears that the administration has taken the advantage of the situation and issued the orders in question in the earlier case.
The Ch PMG has discussed the matter with a realistic approach and finally, in presence of the PMG, Kolkata Region, it has been decided that the orders of transfers under Rule-37 will not be given effect to presently. The Ch PMG himself will take the score of the situation taking the union side into confidence, and a decision would be reached after a few days. The Union side also agreed to the observation of the Ch PMG and a position was reached to restore normalcy at Kolkata GPO.
At about 1:30 P.M., all branches started to function properly at GPO. At the decision of the Circle Union, the Director, GPO had been assured that the staffs of GPO would leave the office today only after finishing the day's work which were left pending since morning, and they did so.
The Circle Union, with this development of the situation, called off the demonstrations at C.O. and in divisions as well. All of our fighting colleagues are, however, requested to please be in readiness to jump into any kind of trade union action within a very short time at the call of the Circle Union, if the need be.
We congratulate the spirit and solidarity of the Postal fraternity of West Bengal for the way they have participated and extended support to the GPO staffs. The All India Union has also been apprised of the facts here. According to the General Secretary, emphasis will be given in the ensuing All India Conference on the aspect of growing administrative attacks in West Bengal Circle.
Posted by AIPEU Group 'C' WB Circle at 2:37 AM No comments: