STAY  ON P.A.  APPOINTMENT : LET  US  MEET  AT  CIRCLE  UNION  ON  SUNDAY,  03.05.2015.
The situation is stressful and overwhelming. So many rumours, so many apprehensions and lack of proper information are bothering us all.

At Circle Union, we have felt the necessity of a meet face-to-face with the selected candidates to share our thoughts and agony. Please assemble for a meeting at 12 noon at the first floor of Circle Union office --- Tarapada Memorial Hall, 37, Ganesh Chandra Avenue, Kolkata-13 (near Chandni Chowk Metro Rail Station).
Candidates are requested to come as many as possible, please share the call among all. Circle Office Bearers will please attend and Divisional Secretaries are requested to accompany them in the meeting.

In the mean time, if there is any development, we shall communicate that through this blog.
Posted by AIPEU Group 'C' WB Circle at 5:33 PM 2 comments:

STAY  ON  NEW  P.A. APPOINTMENT/TRAINING : UPDATE OF SITUATION
Circle Secretary Com. Janardan Majumder has pursued the matter today with officers of Circle Office. Our first priority was to continue the training started in different divisions before arrival of the halting order. It was reported that at some divisions training was about to be stopped due to misinterpretation of the order.
The Circle Administration has agreed to our observation and agreed that the order has not directed to halt training already started. A clarification is being issued accordingly. The training will therefore continue uninterrupted.
As the order has been issued from Directorate, our Circle Office has limitations. All India Union has been requested to pursue to resolve it. All Divl Secretaries and candidates are requested to please keep their calm and watch over the situation carefully. Divl Secretaries are requested to inform Circle Union whenever any development is noticed in their units.
Posted by AIPEU Group 'C' WB Circle at 5:56 PM 2 comments:

NFPE always stands for democracy. We are integral part of the society; unrest, autocracy or hooliganism in social environment also affect our everyday life in the same way as others. So, for our existence and safety we stand firmly by the side of any movement for restoration and maintaining democratic rights.
Posted by AIPEU Group 'C' WB Circle at 4:34 PM No comments:

An order has been released by Postal Directorate, New Delhi, to hold in abeyance issuing appointment/offer letter to the successful candidates of P.A. cadre for the year 2014. At the sane time, no new training order will be issued for the candidates whose all verifications are completed.
The order says :
1. Issuing letter/offer of appointment should be held in abeyance for those cases where such letter has not already been issued.
2.  In the cases where pre-appointment formalities are complete but training order has not yet been issued, no training order will be issued now.
3. In the cases where pre-appointment formalities (verification etc.) are still under process, will continue.

Dear Comrade,
Surely this is already under your notice that the Postal Directorate, through a whimsical order dated 27.04.2015, has instructed a halt on the process of appointment and joining after training of the new outsider P.A.s who have qualified against the vacancies for the year 2013-14.
This has come like a bolt to the candidates waiting happily for a secured future. Almost of them are under different advanced stages of recruitment. They and their family members have found themselves in severe anxiety due to this sudden order. We are gravely concerned as this unscrupulous order is affecting the innocent candidates at large. Please take up the matter with appropriate level of Directorate at the earliest so that the joining of innocent candidates is not delayed and the issue is clinched in no time.
Warm greetings,
Janardan Majumder
Circle Secretary (W.B.), Group-C.

All candidates are requested not to panic or get frustrated. The Circle Union and the entire staff-members of NFPE, the largest and mightiest organisation of this department, is with them with full strength and support. All steps as required will be taken to protect the interest of our would-be colleagues.
Posted by AIPEU Group 'C' WB Circle at 2:31 AM 9 comments:

The last date of submission of Lokpal return for property and assets has been extended from 30th April to 15th October 2015. DoPT has issued order on 25.04.2015 to that effect. The order is available in the following link. 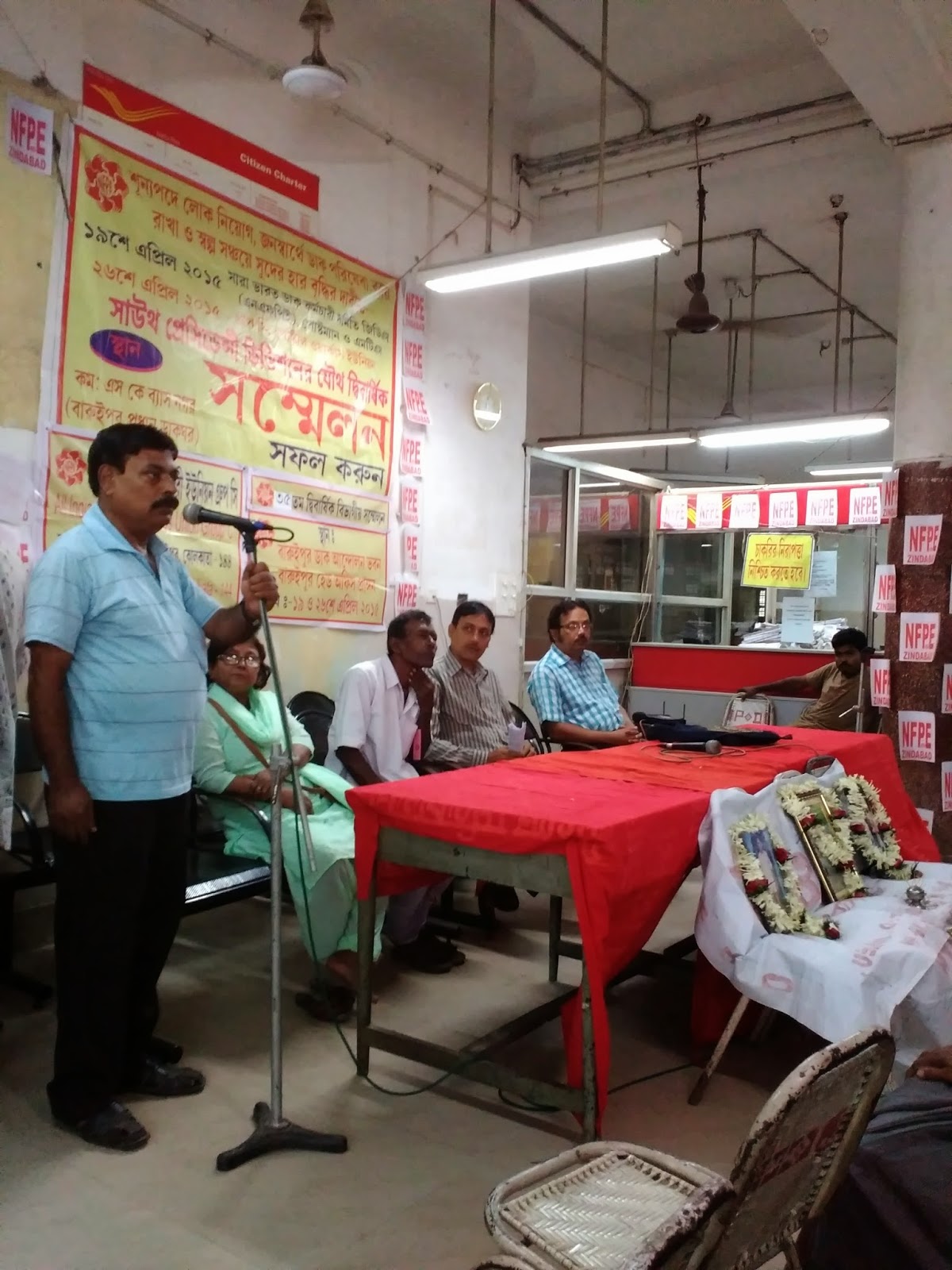 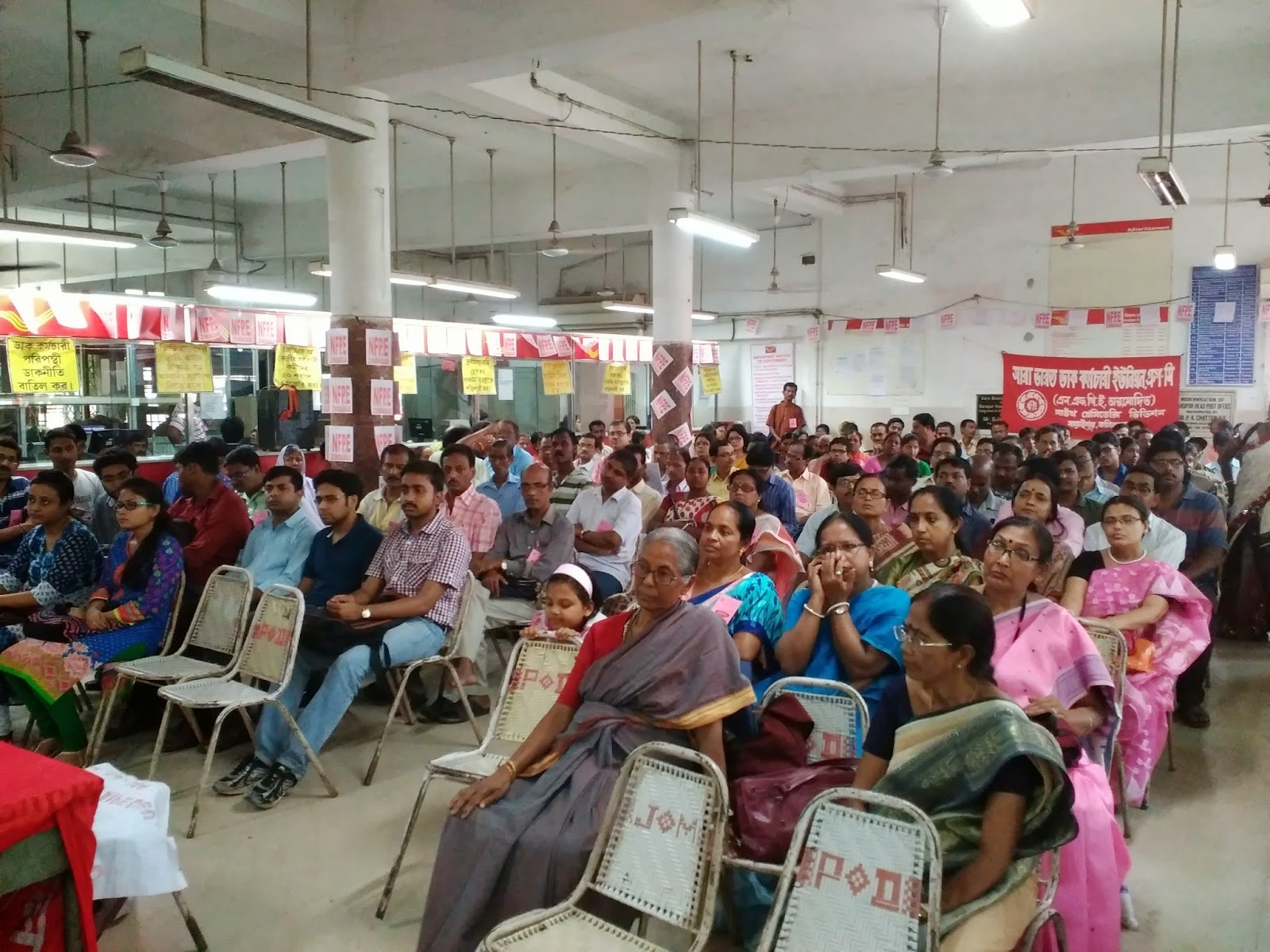 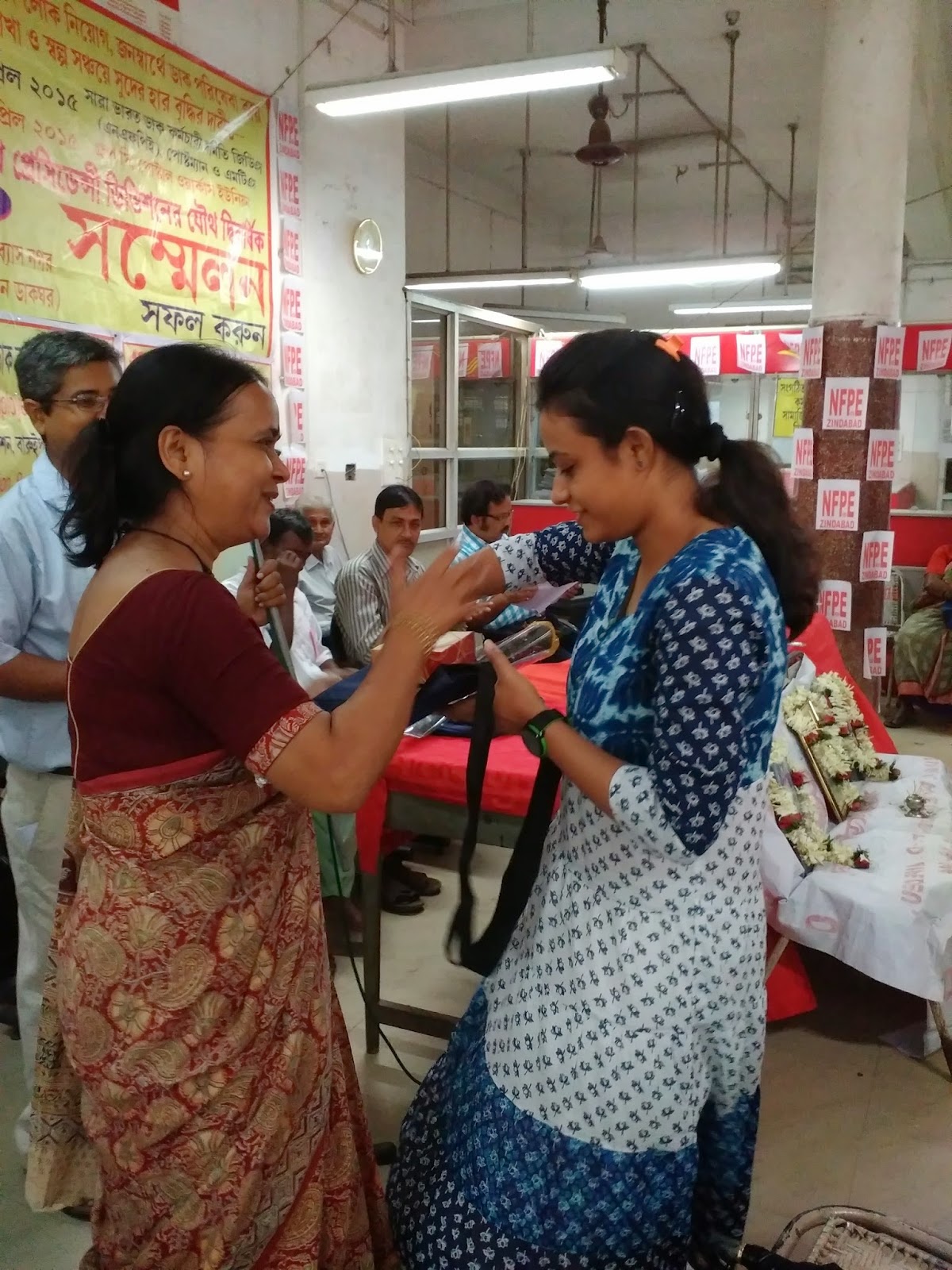 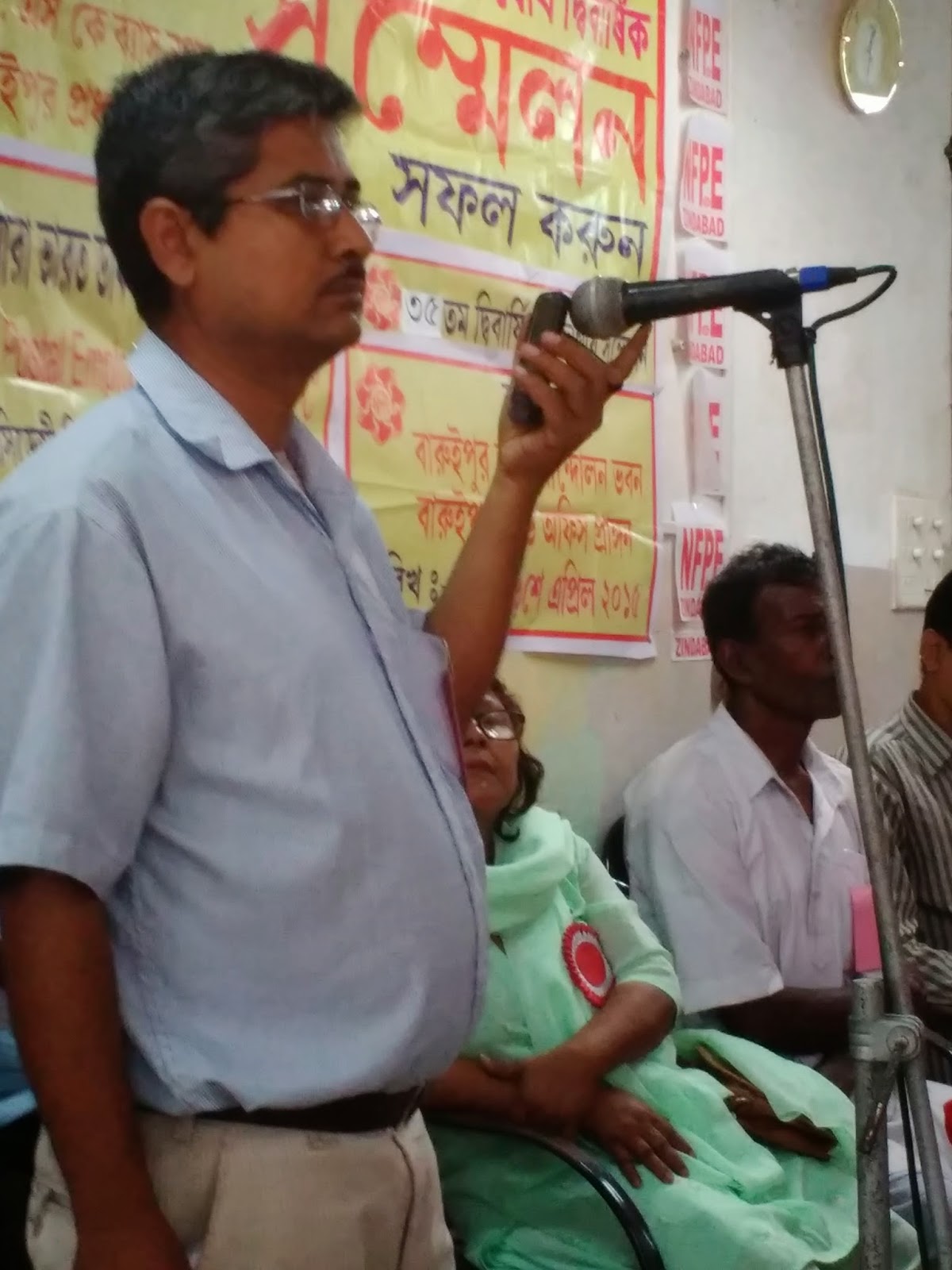 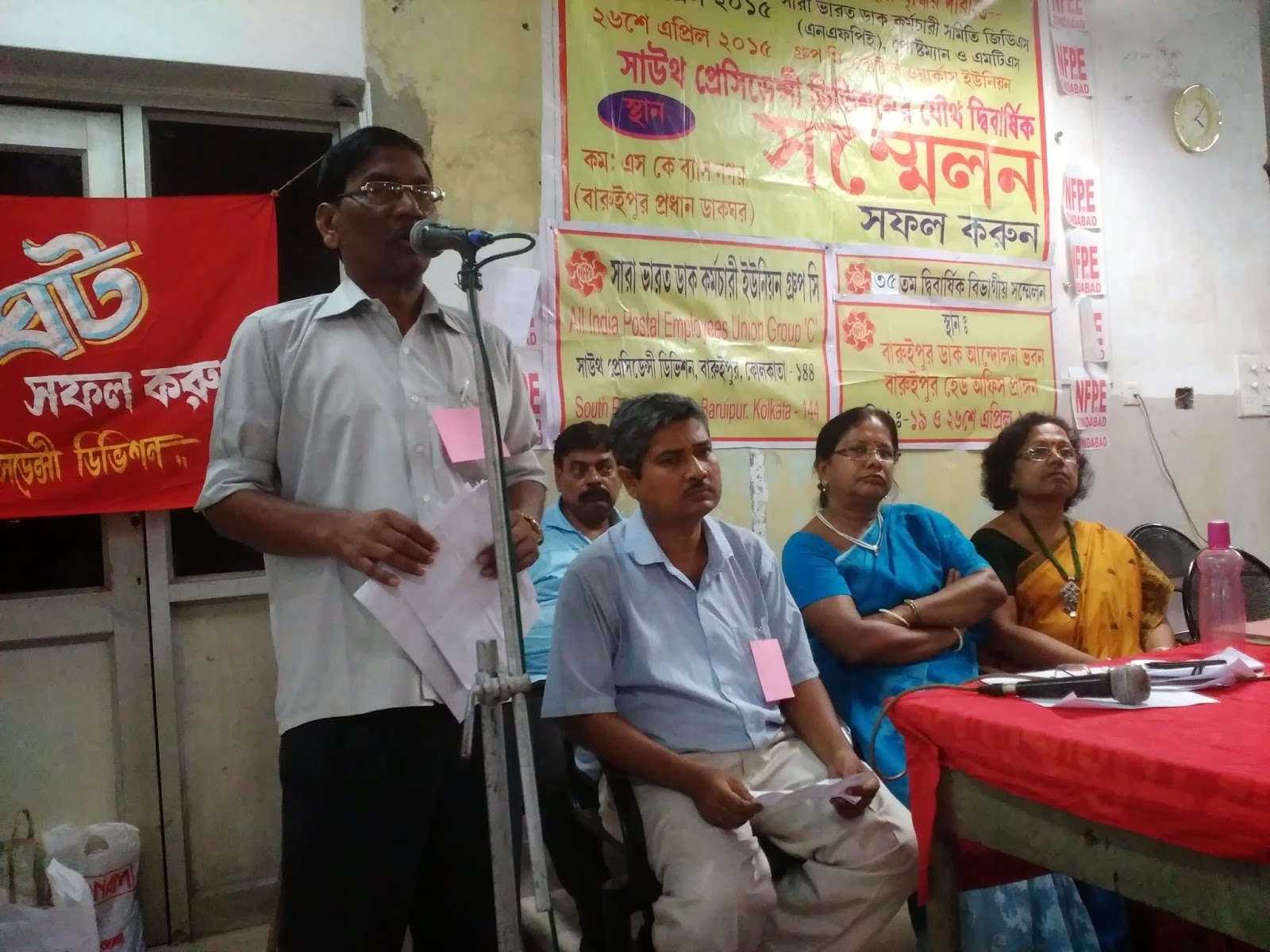 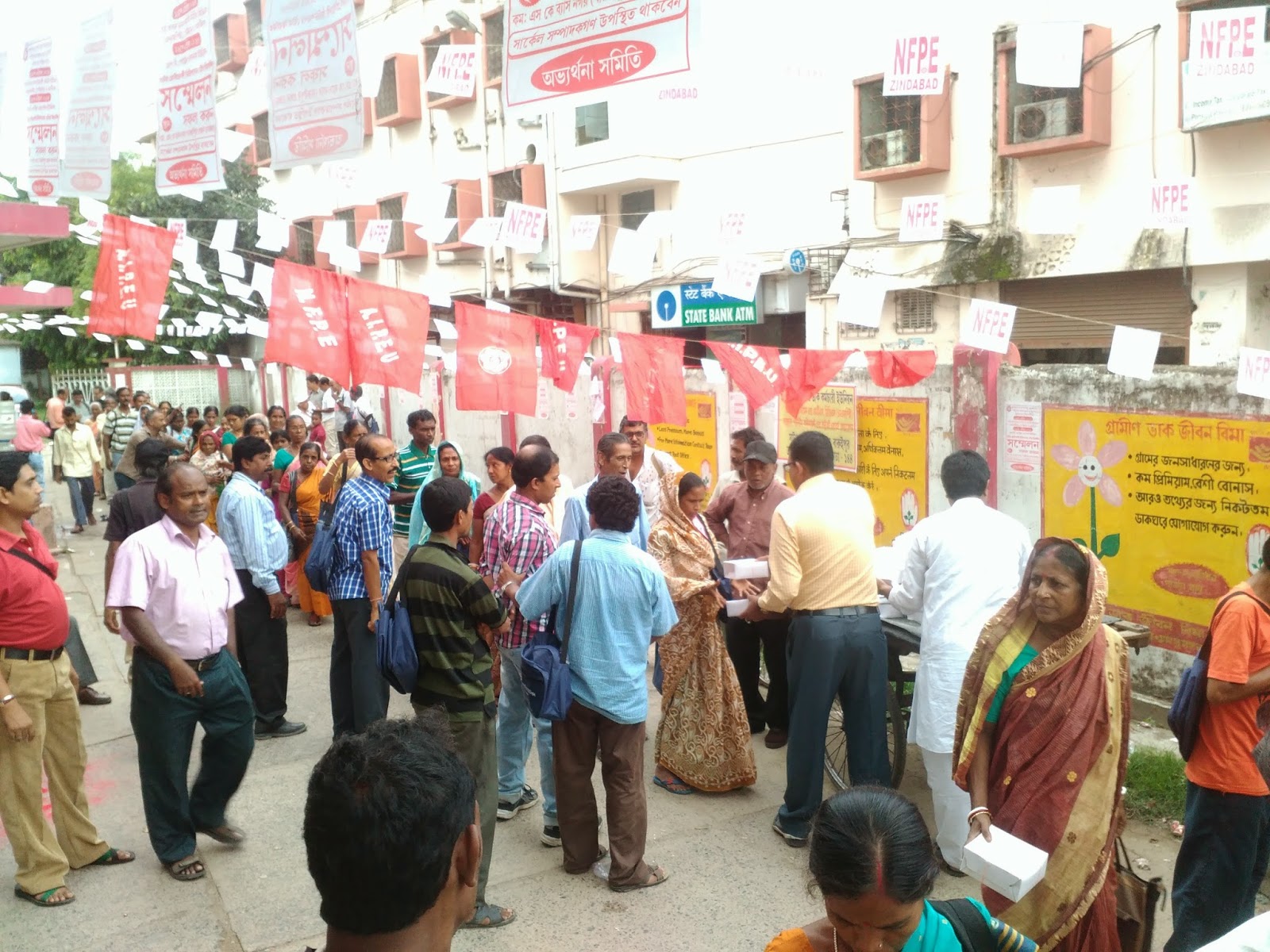 The Divl Conferences of AIPEU Group-C and Part-Time & Contingent-paid Workers Union (NFPE) have been held at Baruipur H.P.O. on 26.04.2015. The spirit and participation of the members were at peak. 340 comrades attended the conference exceeding the assessment.

After hoisting of red flag of NFPE, a brief cultural program was presented by our comrades and also by 'Gananatya Sangha', followed by the joint session inaugurated by Com. Somnath Goswami, Asstt. Circle Secretary, Group-C. In his brief yet significant speech he pointed out the present scenario of the department and our tasks including the ensuing strike from 6th May 2015.  Com. Goutam Kundagrami, Circle Secretary, Part-Time Union, was also present. Then the Draft Secretarial Report and audited accounts were placed. This session was also graced by the presence of Com. Lakshmikanta Ghoshal, Secretary, Pensioners' Association, Rajpur-Sonarpur unit, and by Sri Surajit Dasgupta, ASPOs(HQ).

In the subject session of Group-C, 13 new-recruits in P.A. cadre (yet to join) had been felicitated by senior comrades. Several other comrades ---- retired, transferred or left the department ---- were also felicitated. On the draft report, 5 comrades spoke. Through their deliberations, the pain of the staffs of our department and administrative indifference were revealed. Com. Bijan Chakraborty, Asstt. Circle Secretary, explained the situation with references to CBS roll-out, conspiracy of the Govt for corporatisation of the department, and the way of victory through struggle with unity.

South Presidency always had a special place for Com. Partha Sarathi Das, our veteran leader and teacher and Ex-President of Group-C Circe Union. As he was not in a physical position to attend, he addressed the delegates through mobile phone, played through the speaker and sound box.

The new committee was formed with Com. Bindhyachal Ram as President, Com. Bijan Chakraborty as Secretary and Com. Bhaskar Majumder as Financial Secretary. 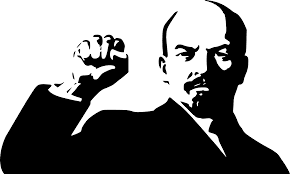 INDEFINITE POSTAL STRIKE FROM 6TH MAY 2015
GRAMIN DAK SEVAKS – REVISION OF WAGES AND SERVICE CONDITIONS SHOULD BE INCLUDED IN 7TH CPC. WE DON’T WANT SEPARATE COMMITTEE. JOIN INDEFINITE STRIKE FROM  6TH MAY 2015, AT THE CALL OF CENTRAL POSTAL JCA ( NFPE, FNPO & THEIR RESPECTIVE GDS UNIONS )

TAKE ALL OUT PREPARATION FOR ABOVE STRIKE. STRIKE NOTICE HAS ALREADY BEEN SERVED AT POSTAL DIRECTORATE. IN WEST BENGAL WE HAVE DECIDED TO ISSUE STRIKE NOTICE (INTIMATION) ON 24TH APRIL’2015. HOLD GENERAL BODY MEETING IN DIVISIONS. FOR STRIKE PROPAGANDA TAKE  THE ADVANTAGE OF DIVISONAL CONFERENCE . TAKE SERIOUSLY STRIKE PROPAGANDA AND INTIMATE YOUR EXPERIENCE TO CIRCLE UNION.

1.  No Corporatization and privatization in Postal Services.

2. Inclusion of Gramin Dak Sevaks (GDS) in the terms of reference of Seventh Central Pay   Commission. Grant of Civil Servant status to GDS and grant of all benefits of departmental employees on pro-rata basis without any discrimination.

3.  Regularise the services of Casual, Parttime, Contingent Employees and Remove the cut off date

6.  Scrap the New Pension Scheme (NPS) and include all employees recruited on or after 01.01.2004 under the old statutory pension scheme.

8.  Fill up all vacant posts in all cadres including drivers Artisans , Assistant Managers, Managers and Senior Managers in MMS & GDS.
(a)    By direct recruitment
(b)   By holding DPC and granting promotions
(c)    By conducting departmental promotional examination.
(d) Replace all condemned vehicles in MMS

9. Implement cadre restructuring in Postal, RMS, MMS and Postal Accounts as per the proposal signed with the JCM (DC) staff side.
10 . Settle issues relating to Postmaster Cadre officials.
(a)    Allow to write IP and PS Group ‘B’ examinations
(b)   Relaxation in service conditions for promotion from one grade to another, at par with general line promotions to identical posts.
(c)    Filling up of all PS Group ‘B’, PM Grade III and Grade II posts by eligible officials and till that time adhoc-promotion may be granted.
(d)   Other related issues such as filling up of 100% senior Postmaster/Chief Postmaster posts earmarked for PM cadre by PM cadre officials alone and maintainance of Circle Gradation list etc.

(a)    Replace out dated computers and peripherals with new ones.
(b)   Increase network capabilities and Bandwidth.
(c)    Set right the Users credential problems in leave arrangements etc.
(d)   Stop hasty “Go live” of CBS, CIS till cleansing of data pucca.
(e)    Provide all assistance and stop harassment in the Implementation of CBS & CIS
(f)      Grant enhanced financial powers to Head Postmasters
15. Prompt and regular holding of JCM, Departmental Council meeting, Periodical meeting with Secretary Department of Posts, Sports Board meeting and Welfare Board meeting. Ensure representation of recognised Federations in Sports Board and Welfare Board by calling for nominations.

16. Ensure full protection of existing allowance (TRCA) of GDS employees and introduce Medical Reimbursement Scheme to GDS. Existing monthly emoluments (TRCA) drawn by the GDS should not be reduced under any circumstances. Revision of cash handling norms.

17. (a)   All Circle offices/Regional offices/DPLI office, Kolkata must be allowed to function as Circle Processing Centres (CPCs) while implementing Core Insurance Solutions (CIS) through McCamish for steady growth of PLI/RPLI Business
(b) Stop diversion of 615 posts (576 posts of PAs from C.O.s and 39 posts of PAs from APS PLI CELL) ordered vide Department of Posts, Establishment Division No. 43-47/2013-PE-II dated the 9th June, 2014.
(c)   Stop harassment and victimization of staff of Circle Administrative offices
in the name of decentralization of PLI/RPLI.

19. Make substitute arrangement in all vacant Postmen/ Mail Guard and MTS Posts. Wherever GDS are not available, outsiders should be allowed to work as substitutes.

20. Modify the orders dated 22/5/1979 regarding existing time factor given for delivery of articles taking in to account the actual time required for door to door delivery.

22. Powers for writing APARs of SBCO staff may be delegated to AO (SBCO) instead of Divisional heads and stop imposing the work of SB Branch on SBCO.

25. Review of marks of JAO (P) Part-II examination held in December 2012 in r/o SC/ST candidates. As the exam was conducted on the basis of old Recruitment Rules i.e JAO and the said posts are Group ‘B’ (Non-Gazetted) review may be held.

WE ARE GOING TO TAKE PART IN MARCH TO PARLIAMENT ON 28TH APRIL AT THE CALL OF CENTRAL JCA( RAILWAY/DEFENCE/CENTRAL GOVT. EMPLOYEES UNIONS/ORGANISATIONS) i.e IN SUCH A TIME WHEN HISTORICAL  MAY DAY
WILL KNOCK OUR DOOR TO INSPIRE/ENCOURAGE US.
SO WE EXPECT EITHER CENTRAL GOVT. WILL TAKE AN APPROPRIATE LESSON FROM MARCH TO PARLIAMENT or, OUR CENTRAL JCA WILL TAKE A BEFITTING OFFENSIVE PROGRAM.
OUR RANK AND FILE IS READY TO FACE THE CHALLENGE.

South Hooghly Division :
The joint opening session was held at Serampore High School and inaugurated by Com. Smarajit Roy Chowdhury, ex-General Secretary, State Coordination Committee. The conference of GDS(NFPE) held at this school, while the conferences of P-III & P-IV were held at Serampore H.O. after the inaugural session. Apart from the inaugurator, Coms. Haraprasad Bhattacharya (Dist. Secretary, CGCC) and Bhabatosh Bose, President, Reception Committee and Sub-Divisional Jt. Convener, 12th July Committee were also present and delivered their speeches in the inaugural session. SSPOs, South Hooghly Divn Sri Bidhan Das sent a message wishing the success of the conference. 170 delegates from P-III, 96 delegates from P-IV and 258 delegates from GDS attended in the conference.
In P-III conference, 6 delegates participated in discussion on the draft report. On behalf of Circle Union Com. Bijan Chakraborty, A.C.S., delivered his speech. New committee was unanimously elected having Coms. Partha Dasgupta as President, Sonachand Shil as Secretary and Amitava Bera as the Financial Secretary.
In P-IV conference, Com. Manas Khatua was present on behalf of Circle Union. New committee was formed having Coms. Suprakash Srimani as President, Srikanta Basu as Secretary and Kashinath Panja as Fin. Secretary.
In GDS(NFPE) conference, Circle Secretary and All India President of the union Com. Bijoy Gopal Sur delivered his speech. Coms. Dinabandhu Bhar, Sukumar Bose and Sukumar Mukherjee have been elected as the President, Secretary and Fin. Secretary of the new committee respectively.