STRIKE  NEGOTIATION  FAILED
STRENGTHEN CAMPAIGN MORE
The Indefinite strike called from 17th January 2012 appears inevitable as the agenda of department regarding MNOP and other issues seemed undeterred during the negotiation with JCA on 27.12.11. Comrades are requested to strengthen strike campaign programs of their divisions more in decentralised manner. Please note that JCA has declared a program on 10th January 2012 to observe Dharna at Circle/Regional/Divisional levels.
The poster for the strike and badges are under print. Circle Unions will despatch these by Monday/Tuesday next. Leaflet will also be supplied. Meanwhile, divisions may publish their own bulletins/leaflets on the content of the circular distributed by Circle Unions in last extended CWC meeting at Yogayog Bhawan on 17.12.11.
Posted by AIPEU Group 'C' WB Circle at 10:59 PM No comments: 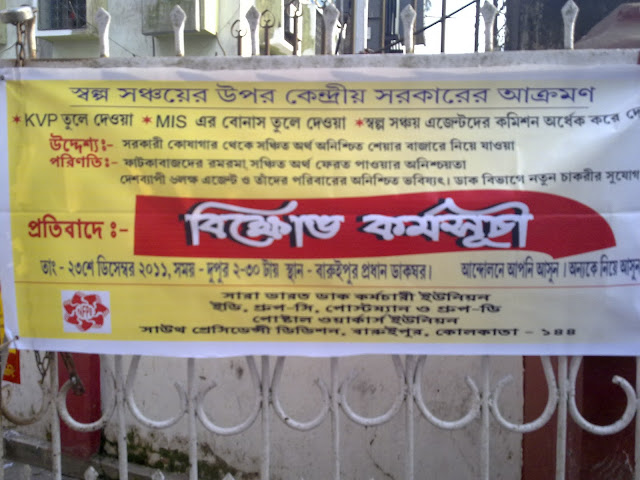 Dear Comrade,
This is to inform you that after consistent efforts for the last few years, the SAS agents of West Bengal has shaped a union of their own. The initiative is now receiving tremendous support from all agents after the recent attack on them, slashing down their commission by half, and on KVP & MIS. As West Bengal attracts the highest investment in small savings, agents here are worst sufferers.
Recently, they have organised a State level convention at Moulali Yuva Kendra in Kolkata, where apart from agents from all divisions of West Bengal, representatives attended from other circles also. They have formed a Preparatory Committee for holding State Conference and within January 2012, all district (divisional level) conferences are going to be held. A decision has also been taken to write to all MPs with the request to place their issue in the Parliament. Com. Basudeb Acharya has already assured to put up the issue in Parliament during this session. Gradually, their organisation (All India Small Savings Agents Association) are getting stronger momentum. In the State Convention, Com. Tapan Dasgupta, President, CGCC, and Com. Pijush Roy, General Secretary, CGCC, West Bengal were present by their invitation.
We are having close liaison with them and trying to contribute in their initiative. We have also announced a date (23.12.2011) to hold demonstration at all divisional headquarters with their presence and participation. A resolution demanding restoration of KVP, Bonus of MIS and agent commission at the earlier rate will be sent to the Prime Minister, Finance Minister, Minister of Communication & IT and DG(Posts) from the demonstration.
Under this situation, the Postal Circle Unions of West Bengal Circle request that considering the graveness of the attack on Small Savings and the agents who actually use to bring the business to post offices, this issue may be included in the strike charter of demands for the indefinite strike to be commenced from 17th January 2012. We also request you to take suitable organisational steps so that SAS agents in all circles get united in this way and form their organisations.
Comradely yours,

NORTH  HOOGHLY  DIVISION  OPENS  NEW UNION  OFFICE  AT ARAMBAGH
North Hooghly Division has opened a zonal union office at Arambagh in a flat newly owned by the divisional unions. The Divisional Unions already have a double-storied union office at the divisional headquareters, Chuchura. The union office at Arambagh has been formally inaugurated yesterday by veteran leader and former Dy. Secretary General, NFPE, Com. Rabindralal Bhattacharya. About 225/230 comrades of North Hooghly Division assembled in the program to witness the event. Circle Unions wish the Divisional Leadership and members all the best to form an even stronger organisation.
Posted by AIPEU Group 'C' WB Circle at 6:18 PM No comments: 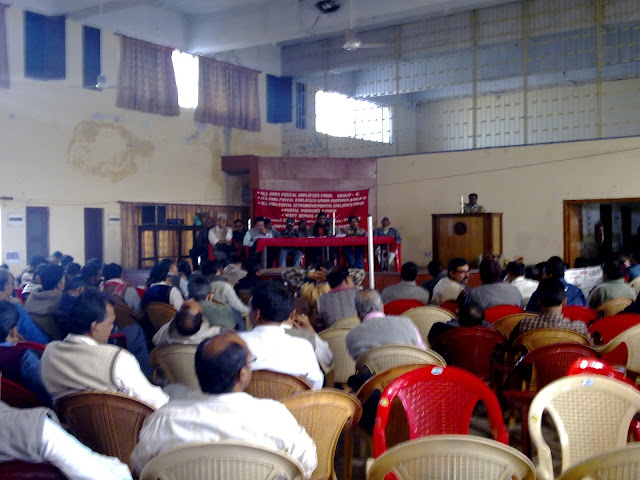 The Joint Extended Circle Working Committee held today at 13th floor auditorium of Yogayog Bhavan has discussed the backdrop of the call of revived indefinite strike from 17th January 2012.  All Divisional Secretaries were present and presented their views and plans. Dates of joint working committees of all divisions have also been finalised.
The meeting has laid down following preparatory programs to be observed, in addition to those already announced :
Posted by AIPEU Group 'C' WB Circle at 10:27 PM No comments:

INDEFINITE  STRIKE  COMMENCES  FROM  17th JANUARY 2012 ---- ENSUING  PROGRAMS  BY  CIRCLE  UNIONS
Central JCA has changed the date of commencement of the indefinite strike from 3rd January to 17th January 2012. The date of serving the strike notice remains the same. The Circle Unions will serve the strike notice at Yogayog Bhavan on 15.12.11 through a demonstration. Leaders and comrades of division and branches of Kolkata will assemble at Yogayog Bhavan on that date. These divisions (in Kolkata) will serve strike notice in their divisions / branches on 20.12.11. However, other divisions will serve the notice on 15th December.
Following programs are announced by the Circle Unions in the offing.
All comrades are requested to put maximum effort for success of the above programs.
Posted by AIPEU Group 'C' WB Circle at 7:00 PM No comments:

Central JCA has finally decided to revive the postponed indefinite strike of 5th July 2011 again from 03.01.2012 as the department is acting  unilaterally and no satisfactory or effective step has been taken so far to implement the assurances given during discussions on the demands of the indefinite strike called from 5th July 2011.
All employees of the department is experiencing that nothing has changed despite the assurances. The situation of GDS employees and Part-time & contingent-paid workers are still the same. The department is desperate to implement Mail Network Optimisation Project, which is a brain-child of the infamous Mckinsey Consultancy, despite vehement objection of the entire staff-side. The meeting of the JCM Departmental Council is purposefully delayed to avoid the compulsion of statutory discussion with the staff-side. The Federation leadership has detailed the backdrop in its blog.
The JCA has directed us to serve strike notice on 15.12.2011 with huge gathering of our comrades. As we do not have much time in our hands, our leaders and members are requested to please act immediately and jump into campaigning and revive the preparation. The contents of the charter of demands is already known to everyone. So it would not be difficult to take adequate preparation. Let us vouch to stall the postal functioning of West Bengal since 03.01.2012, if the department does not amend itself to implement the assurances right now.
Posted by AIPEU Group 'C' WB Circle at 11:57 PM No comments:

DEMONSTRATION  AT  YOGAYOG  BHAVAN  ON  9TH DECEMBER 2011
The NFPE Group of Postal Circle Unions have convened a demonstration at the Circle Office on 9th December 2011, Friday, at 1-30 P.M. at 6th floor. The main demands are :
There also will be some other issues of divisions under Kolkata Region. Secretaries are requested to please bring it under the notice of the Circle Union if any such issue is pending for long in their divisions. All secretaries of divisions in and around Kolkata are requested to mobilise comrades to attend the demonstration in huge number.
Posted by AIPEU Group 'C' WB Circle at 9:30 PM No comments: 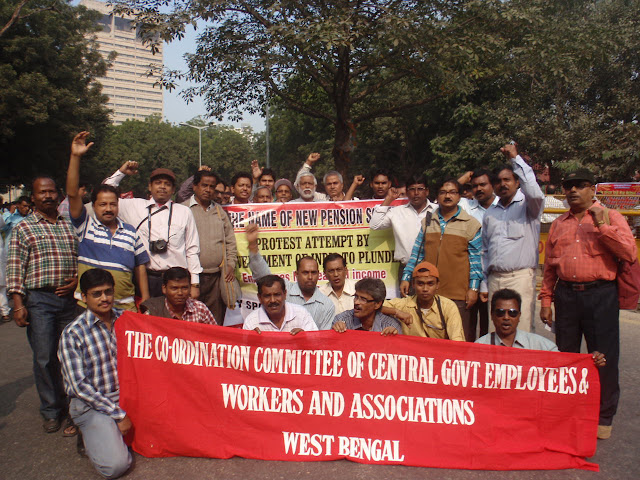 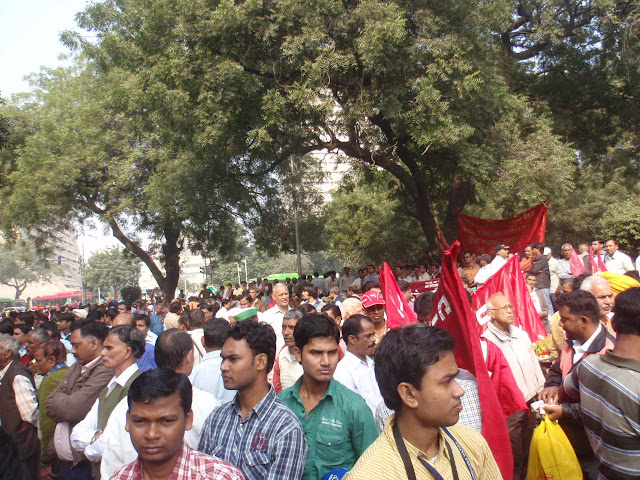 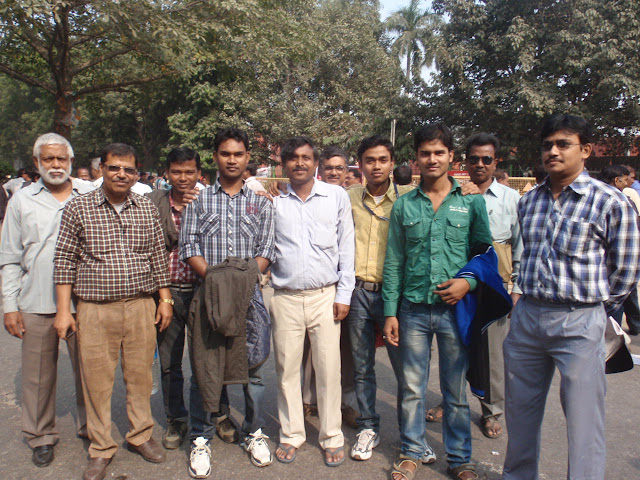 As per the call of the Central Trade Unions, thousands of workers and employees have rocked the roads of the capital of our country against the intention of the Central Govt to put up Pension Fund Regulatory & Development Authority Bill in the running winter session of the Parliament. When most of the countries of the world, even the developed countries, are suffering from increasing unemployment and slow growth rates due to adopting neo-economic policies, our Central Govt is still not giving up their plans on the same road-map.
The government is facing financial hardship due to their own financial policies, but choosing the funds in which middle or lower middle class citizens of our country invest or keep their meager savings to pump in money to the share market to inflate the market. This is at the cost of the social security of the workers and employees and we cannot accept that. From West Bengal, a significant number of young comrades have also enthusiastically walked along the experienced comrades and raised their voices. Participation from different divisions were as follows : Coochbehar, Jalpaiguri, Nadia South, Darjeeling, East Kolkata -  4 each, Birbhum, South Hooghly, North Hooghly, Contai, Central Kolkata - 3 each, Midnapore, Purulia - 5 each, Barasat - 2, South Kolkata, Alipore - 1 each, South Presidency - 7 (4 P.A.s attended from this division had not yet completed even a year of their service), Gr-C & Postmen & Gr-D and SBCO Circle Unions - 7. Among the above representation, one from Darjeeling and three from East Kolkata were lady comrades.
We resolve to strengthen our movement in future and let us start the preparation for the strike called by all Central Trade Unions and Federations, tentatively on 28th February 2012.
Posted by AIPEU Group 'C' WB Circle at 8:46 PM No comments: