As the Federation has announced to hold the eastern zonal study camp in Guwahati on 27-28 April 2013, the tickets are to be booked now. Willing comrades including Circle Office Bearers and divisional secretaries are requested to contact Com. Janardan Majumder, C.S., or Com. Asit Bangabas, A.C.S., and give the personal details. We prefer fresh comrades who could not attend the ealier study camps organised by CHQ, Federation or Circle Unions.
Please ensure to communicate the names within next three days.

EDITORIAL  OF  'POSTAL  CRUSADER'  FEBRUARY 2013  ISSUE  IS  REPRODUCED  BELOW

WE ARE NOT going to surrender.
Join the two daYs strike on February 20 & 21
We, the Postal employees, have a proud and inspiring history of participating in the freedom struggle of our country against the British imperialism and in the post-independent India against the onslaughts of the retrograde policies of the Government of India.  Many of our leaders and comrades have sacrificed their life for the cause of the coming generation.  Job security, wages, pension and other service benefits are all the outcome of the struggle and sacrifice of hundreds and thousands of such comrades.  They faced dismissal, removal, suspension, increment cut, transfer to remote places, break-in-service and other severe victimisations.  Dies-non was not at all a punishment for them.  They never complained about wage-cut due to dies-non.  Not even  a single benefit was given by the Government without struggle and consequent heavy victimisations.  1st to 6th Pay Commissions were appointed by the Government only after the united struggle of the employees, each time.
Now we are facing a very crucial and critical situation.  The ill-effects of the neo-liberal economic policies of the Central Government has become the greatest threat to the survival of the entire working class, especially Central Government employees including five and a half lakhs Postal, R M S and Gramin Dak Sevaks.  The question before us is -Are we able to protect our job security and hard-earned benefits?  Are we ready to fight or are we going to surrender before this attack?  The answer is - No. We are not going to surrender.  We will continue our fight till the imperialist globalisation policies are thrown to winds, just as we have thrown the British imperialism out of our country.   We are not alone, crores and crores of workers and employees are with us in this fight.  We are ready for sacrifice.   We are not going to run away from  our responsibilities.  We shall face the challenge and continue our fight to change the system in our favour.  Ultimate victory will be ours.
It is this uncompromising spirit and the readiness for sacrifice, that made National Federation of Postal Employees (NFPE) to join the two-days historic strike of the working class on 2013 February 20, 21.  The strike is being organised by the entire trade unions including INTUC, BMS and the left trade unions.  In the Postal, the strike is organised by Central JCA, including NFPE and the INTUC affiliated FNPO.  This is the first time in the history of India a cent per cent united strike of 48 hours by all the Unions and Federtions is taking place.  More than ten crores workers will participate in the strike.  The working class of India, in one voice, demand the UPA Government to change the imperialist globalisation policies.
Central Government employees are the first victims of the neo-liberal economic policies pursued by the Central Government from 1991 onwards.  During the last twenty years about eight lakhs posts are abolished.  Still five lakhs posts are lying vacant in various departments.  Many departments are closed or privatised.  More and more casual and contract workers are engaged.  Social security schemes, including statutory Pension scheme are given a go-bye.  Instead, share market oriented contributory Pension scheme is introduced.  Three lakhs Gramin Dak Sevaks of the Postal department are denied of their legitimate rights.  Casual, Part-time, contingent employees are not given their due wage revision.  Even compassionate appointments are denied imposing arbitrary restrictions.  Bonus ceiling not raised.  Further the Government has declared the National Postal Policy 2012 which is nothing but a road-map to privatisation of Postal Services by granting licences to the multi-national courier services.
The demand for appointment of 7th Pay Commission is not yet accepted, inspite of the thundering success of the 12th December 2012 strike organised by Confederation of Central Govt. Employees & Workers.  As an impact of the strike, all the Central Trade Unions have submitted a memorandum to the Finance Minister to announce constitution of 7th CPC in the February 2013 budget itself.  Still the Government is silent on Pay Commission and merger of 50% DA.  February 20, 21 strike is a continuation of 12th December strike.
The steep rise in prices of essential commodities, disbanding of the public distribution system, deregulation of petrol and diesel prices , disinvestment of public sector, rise in unemployment, shrinking of employment opportunities, proposed move to amend the labour laws in favour of the employers, attack on social security, denial of assured pension for all, introduction of contract and casual labour system in all sectors, denial of minimum wage of Rs.10,000/- to industrial workers, refusal to remove bonus and PF ceilings etc. are all due to this neo-liberal economic policies.
The attack is all round.  To save the Postal, to save the Central Govt. departments, to save the public sector, to save the common people and workers of our country including Postal employees the only way out is to fight back these policies.  Let us wholeheartedly join this struggle and make it a historic success.
Posted by AIPEU Group 'C' WB Circle at 9:51 PM No comments:

Consolidated instruction on compassionate appointment - regarding 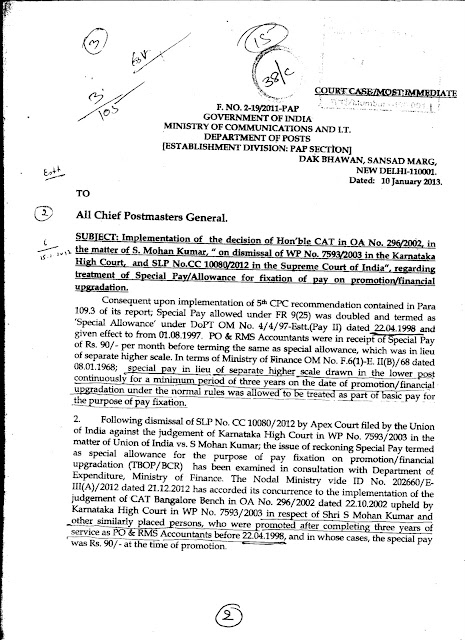 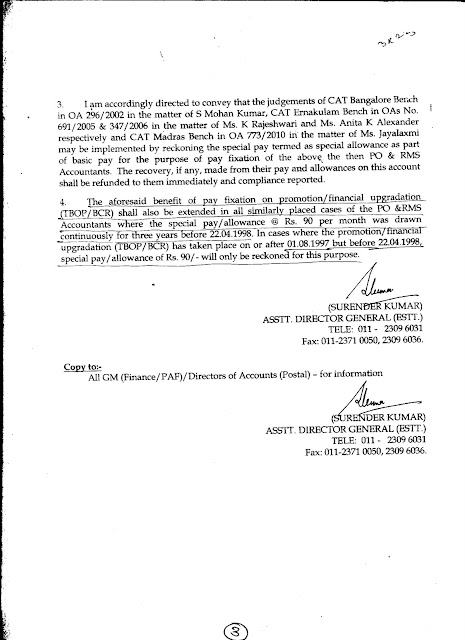 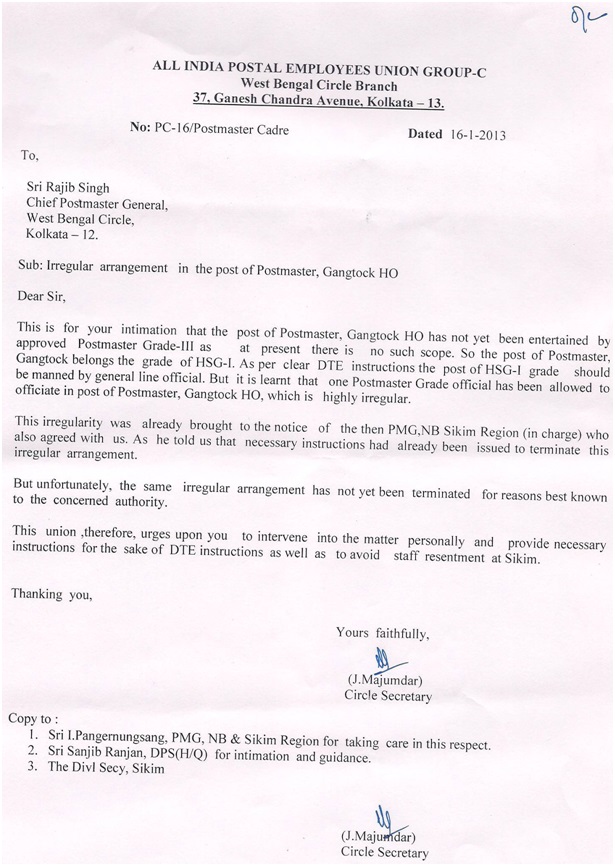 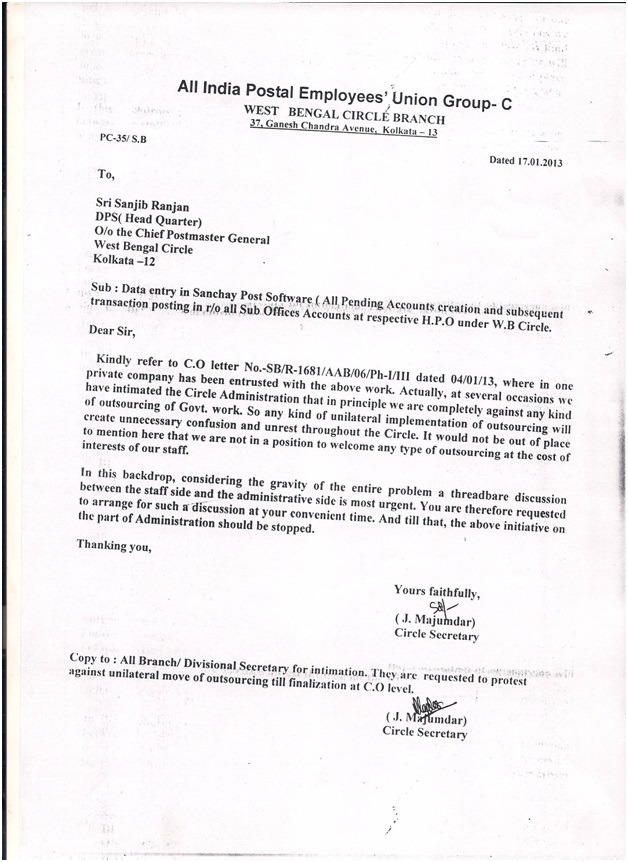 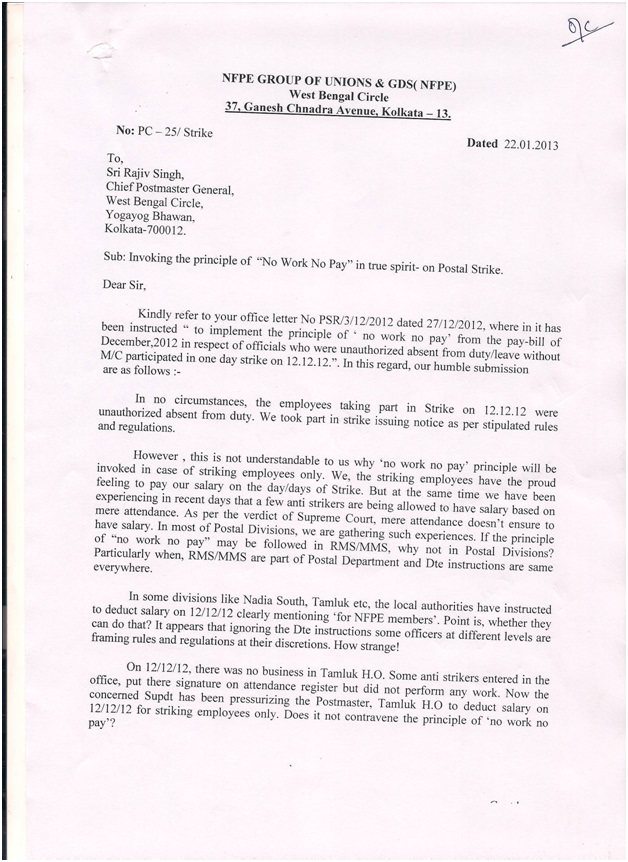 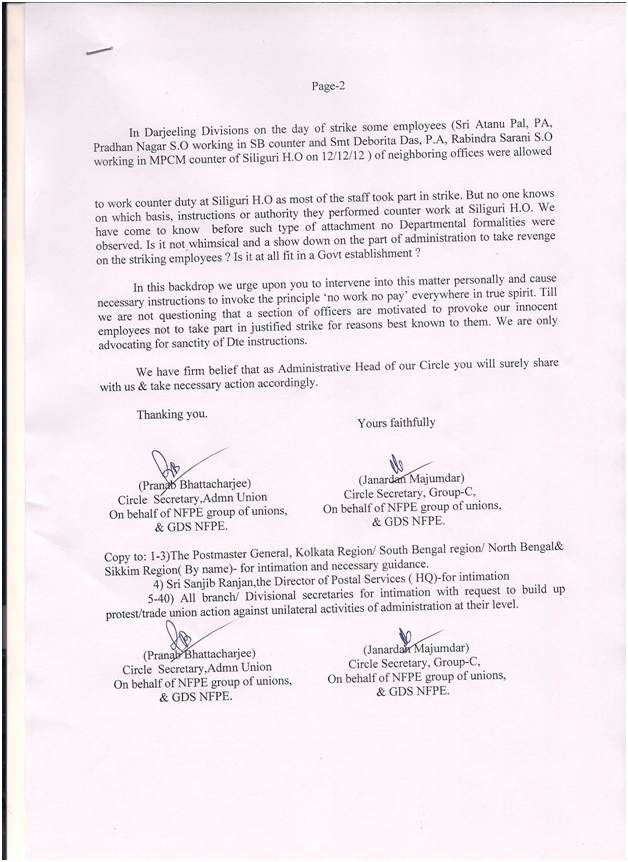 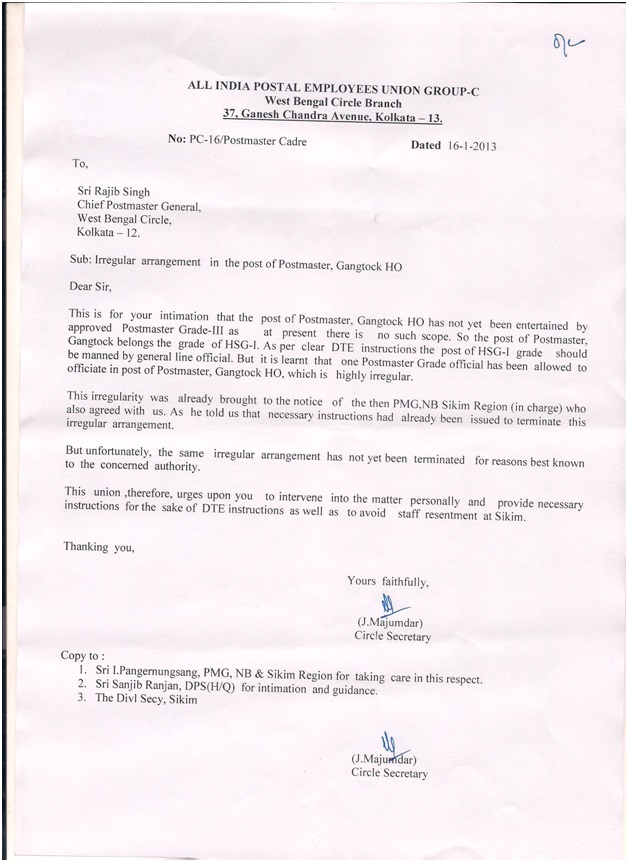 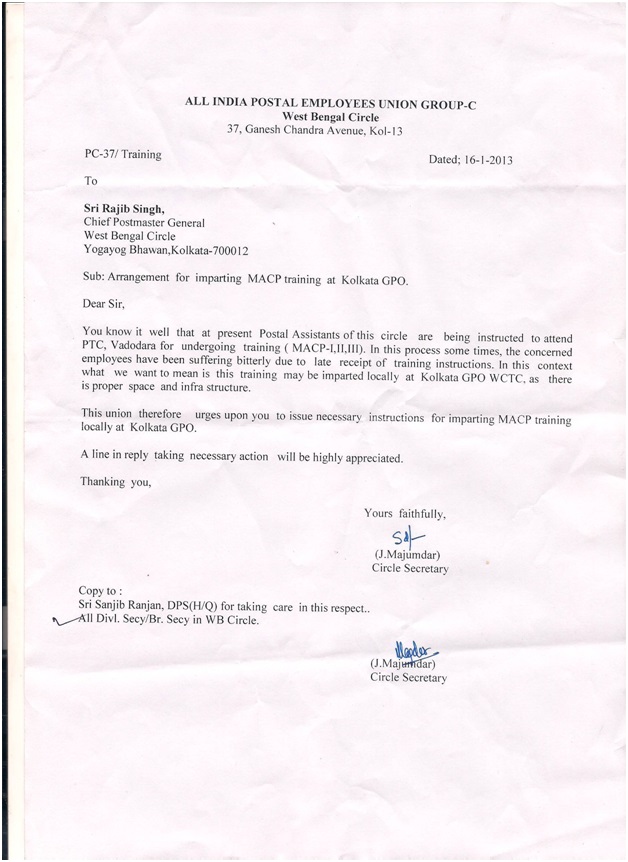 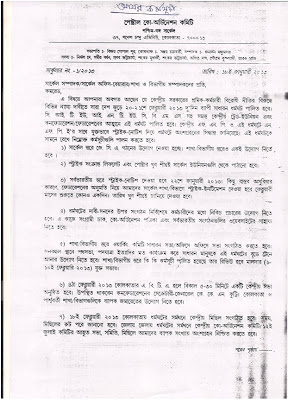 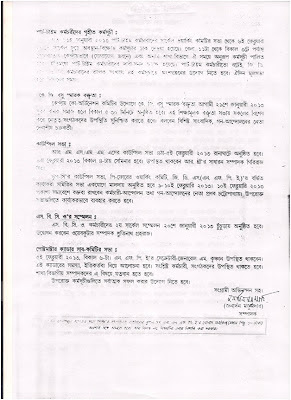 Dear Comrades,
Draft copy of the Bi-ennial report for the ensuing All India conference has been sent to all Branch/division by CHQ . Now our task of Branch/Division  are:-
To this direction Circle Working Committee Meeting will be held on 26th February , 2013. So Branchs/Division has to send suggestion/amendment/resolution   to Circle Union latest by 20th February, 2013. This decision has been taken in last Circle Working Committee Meeting held on 19.01.13.
This is most urgent.

All the Divisional Secretaries are requested to inform & take appropriate step so that all the concerned members  can participate the meeting.
Posted by AIPEU Group 'C' WB Circle at 8:47 PM No comments:

Circle Union writes for trainning at Kolkata GPO instead of Vadodara