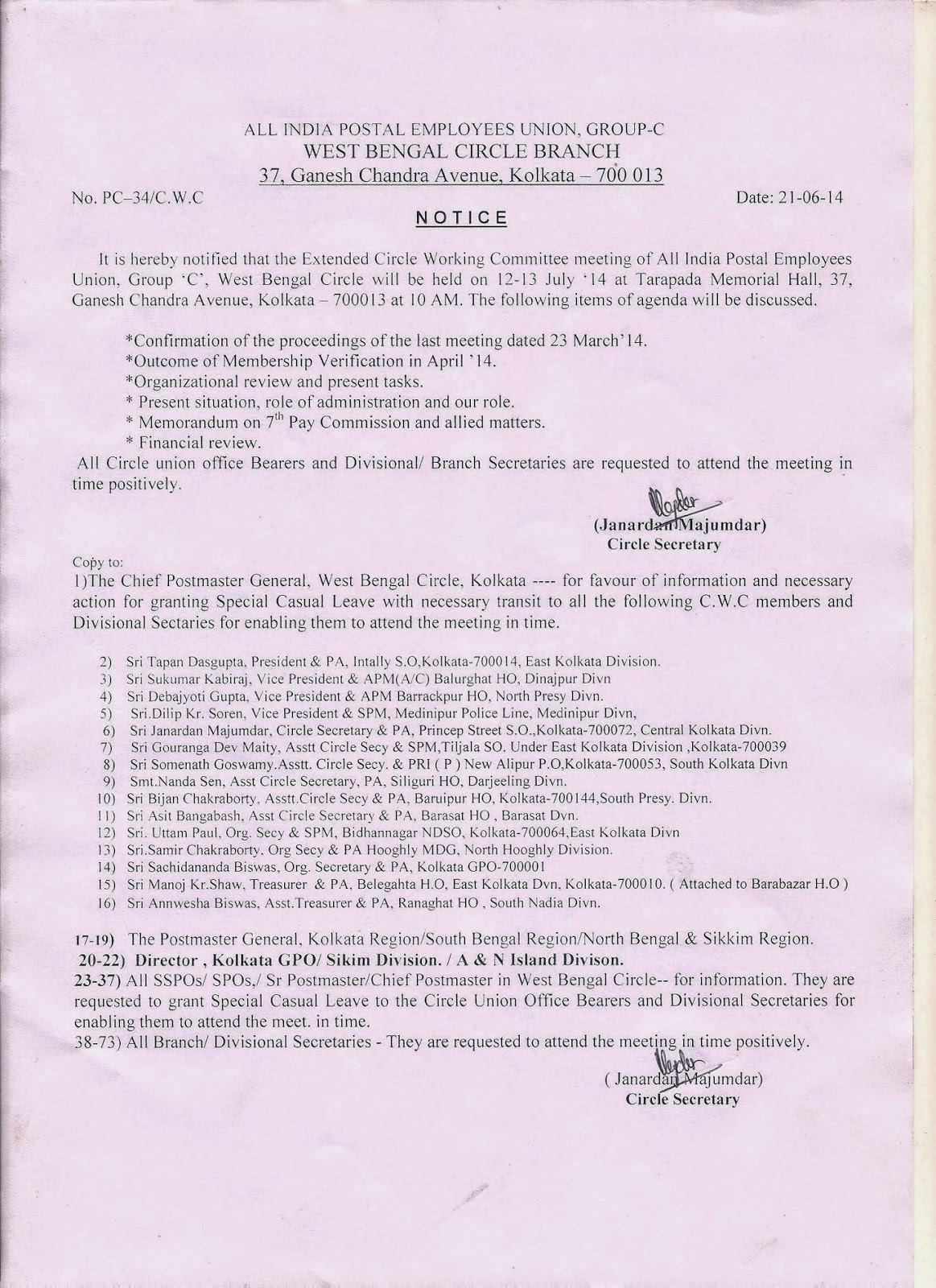 Joint extended working committee meeting of group-C, Postmen & MTS/Gr-D and GDS (NFPE) , West Bengal Circle will be held on 12 and 13th July, 2014(Saturday & Sunday) at Tarapada Hall (Circle Union) from 10.00 hrs on 12th. All Cirrcle office bearers and Divisional Secretaries are requested to book their Rly. tickets well in advance. Notice will be displayed in this web page.
Posted by AIPEU Group 'C' WB Circle at 3:19 PM No comments:

Clarification regarding purchase of Air Tickets from Authorized Travel Agents for the purpose of LTC.

F.No. 31011/4/2014-Estt (A.IV)
Government of India
Ministry of Personnel, Public Grievances and Pensions
Department of Personnel and Training
North Block, New Delhi-110 001
Dated: 19th June, 2014
OFFICE MEMORANDUM
Subject: - Clarification regarding purchase of Air Tickets from Authorized Travel Agents for the purpose of LTC.
The undersigned is directed to refer to the instructions issued from time to time on the above noted subject and say that the Government employees are required to book their air tickets directly from the airlines (Booking counters, website of airlines) or by utilizing the service of Authorized Travel Agents viz. 'M/s Balmer Lawrie & Company'. 'M/s Ashok Travels & Tour' and 'IRCTC' (to the extent IRCTC is authorized as per DoPT O.M. No.31011/6/2002-Estt.(A) dated 02.12.2009) while undertaking LTC journey(s).
2. In a number of cases, it has been noticed that the aforesaid instructions are not being followed and as a result various Ministries/Departments continue to make references to DoPT seeking relaxation of the conditions for one reason or the other. The most common reasons given by the employees are unawareness of the rules and non-availability of Authorized Travel Agents viz. M/s Ashok Tmvels, M/s Balmer Lawrie & Company at places where the tickets have been booked from. Even in such cases, the option of booking directly from the airlines through their website is available. In no case is the booking of tickets through any other agency is permissible.
3. All the Ministries/Departments of Government of India are advised to ensure that their employees are made aware of the above mentioned guidelines to avoid breach of any of the LTC rules.
4. This issues with the approval of Joint Secretary(E).
sd/-
(B.Bandyopadhyay)
Under Secretary to the Govt. of India
Posted by AIPEU Group 'C' WB Circle at 12:56 PM No comments:

IN WHICH IT WAS MENTIONED THAT ALL THE LGO PASSED CANDIDATES WILL TAKE 12 DAYS IN-HOUSE TRAINING IN THEIR DIVISION. ONLY WHOSE PVR AND ALL PRE APPOINTMENT FORMALITIES HAVE BEEN COMPLETED  WILL GET SAID TRAINING AND AFTER COMPLETION OF IN-HOUSE TRAINING THEY WILL JOIN AND WORK AS BACK PA.

IT WAS CLEARLY MENTIONED IN THE SAID LETTER THAT NO IN-HOUSE TRAINING WILL BE IMPARTED TO THE CANDIDATES WHOSE PVR ARE NOT YET COMPLETED.
Posted by AIPEU Group 'C' WB Circle at 11:49 AM No comments:

As per the call of the Circle Unions, demonstration was staged in all divisions yesterday and resolution was adopted covering common problems and problems of each division. Demonstration was also held at Yogayog Bhavan and a team of Circle leadership met the Chief PMG with the resolution. The Circle Head has assured that an  elaborate discussion will be arranged shortly on the issues mentioned in the resolution.

During the talks, the issue of providing induction training at PTC, Darbhanga for P.A. candidates of Howrah, Barasat, Nadia North divisions came up. Chief PMG has informed us that though for all the candidates (having their PVRs complete) training was initially planned, it could not be ordered as at the last moment Directorate reduced the quota of West Bengal Circle. However, the Chief PMG has told us that he has written to the Directorate detailing the need of West Bengal Circle and has also suggested some solutions.

Accordingly, Circle Union will also address the Group-C (CHQ) shortly to pursue the issue with Directorate from their level.
Posted by AIPEU Group 'C' WB Circle at 6:34 PM No comments:

After continuous persuasion and relentless efforts of our Circle Union, Circle Office has issued a speaking order today morning to issue appointment order for all P.A.s of 2011-12 batch, irrespective of completion of PVR or not. For candidates with completed PVR, there will be in-house training immediately, while for those still not having PVR, they will be offered conditional appointment after submitting 2 character certificates countersigned by 1st class Magistrate.

Our Divl Secretaries are requested to immediately contact all candidates to help them get prepared (especially in obtaining character certificates if PVR is not there), and Divl/Unit Heads for immediate implementation of the order.

The copy of order is reproduced below :

Sub:-Appointment of newly selected candidates in PA / SA Cadre against  the vacancies of 2011-12 under Direct Recruitment .

In connection with the above and in supersession of the orders issued under this office letter of even no. dated 20-05-2014 & 10-06-2014 , the following orders of the Chief Postmaster General , W.B.   are issued to have effect keeping in views the Dte’s clarification contained in communication No. 60-9/2010-SPB-I dated 30-12-2010 that it is for the Circle to decide how best the candidates can be utilized till they under go training at PTC.
1. As being done in other Circles the newly selected candidates in PA / SA cadre whose PVR is complete will be given in house training and after that they should be appointed  to work at back offices/ non sensitive posts. When seats will be allotted they may be sent to PTC for induction training .
2. The Selected  candidates in merit list whose PVR is not complete  may be issued provisional appointment letter  to work at back offices / non sensitive posts subject to out come of PVR  provided that they have furnished two (2) character certificates from two different Gezetted Officers duly countersigned by the 1st class Magistrate. They should also furnish an undertaking  that if any adverse remark is found in the PVR subsequently their services will be terminated forth with .
(2)

3. From the date of joining i.e. from the date of In house training   the candidates will be entitled to get regular pay and allowances in the  pay band . No question of stipend / allowance arise .