In our Joint Working Committee Meeting held on 11th July’ 2015, we took a decision to hold indefinite hunger fast at Circle Office from 3rd August’ 2015. Unless higher authority take drastic action against present SSPO’s of South Hooghly Division for his irregular activities. Already we had a discussion on 24th July’ 2015 with our Chief Postmaster General, West Bengal Circle at 4 monthly meeting. She had a passionate hearing. Again Postmaster General, South Bengal Region decided to hold bi-monthly meeting on 4th August’2015, where issue of South Hooghly is an agendum. In these circumstances, program from 3rd August’ 2015 has been deferred.
But we will not wait for long. If administration ignore our demand, the same program will be started soon, date of which will be communicated shortly, if required.

29th July 1946 ---- it is the red letter day in the history of the working class in India. In support of the ongoing strike called by All India Postmen and Lower Grade Staff Union, which started all over the country from 11th July 1946 and later spread to all over the country, the working class of Bengal and Assam observed a general strike and Hartaal. The strike was called demanding settlement of 12 demands comprising of wage revision and other better service conditions and pension etc., to which Govt was reluctant. The steep rise in price-index and inflation in post-world war days jeopardised honourable social living by the Postal staffs. The strike started from 11th July 1946.

From the beginning, leftist leaders and all intellectuals of Bengal were deeply involved with the strike. Com. Jyoti Basu issued a statement in 'Swadhinata Patrika' supporting the strike. 40,000 Postal & Telegraph employees of Bengal and Assam joined the strike since 21st July 1946. A proposal in support of strike was adopted by Bengal Assembly on 24th July led by Kiran Shankar Roy. Within 18th July Rs.80,000/- was collected in strike fund. National media like Indian Express and international daily like Chicago Tribune described that the nation was almost crippled by the effct of the strike. 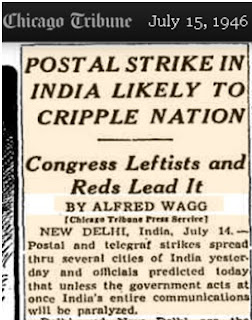 In the meeting at 'Maidaan' the speakers were Dada Ghosh, Mrinalkanti Basu, Bankim Mukherjee, Abdul Momin and many more who apparently had no connection with Postal movement. All leftist political parties, viz. --- Socialist Party, Communist Party, Revolutionary Communist Party (RCP), Forward Block, Revolutionary Socialist Party (RSP) and trade union leaders came forward in support. Com. Dada Ghosh wrote in his diary--- 'In the British Regime of 200 years, it was the biggest meeting of the workers and labourers in the city of Kolkata.'

The effect of 29th July hartaal was immense on the Postal Strike and administration. In the rest of the country the strike was called off on 3rd August 1946, but in Bengal & Assam it continued till 6th August 1946. Many demands were accepted by the Govt. and a Good-Conduct Pay was granted to the Postal Workers.

In the entire episode, the role and opinion ofthe Indian National Congress was unclear. Pandit Jawaharlal Nehru issued a statement in which he condemned Govt's inability and negligence to handle the demands and the situation, but he did not make clear whether he supported the demands or the strike. Satyanarayan Sinha, Chief Whip of Congress in Central Assembly, issued a statement against the strike. Obviously, they were more interested in smooth transfer of power which was imminent.

To commemorate the day, South Kolkata Division called a Working Committee meeting of their Group-C Union. They decided to hold a session of speech on '29th July 1946 ---- The Perspective of strike : Then and Now'. Com. Bijan Chakraborty, Asstt. Circle Secretary, Group-C, attended the meeting and delivered brief accounts of the 1946 strike, the glorious 29th July and our coming strikes on 2nd September and from 23rd November 2015.

Let us all pay our tribute to the leaders and participants of strike of 1946, and remember that it is our historic duty to carry the legacy forward.
Posted by AIPEU Group 'C' WB Circle at 12:22 AM No comments:

Submission of Declaration of Assets & Liabilities for each year under Conduct Rules & Lokpal: DoPT Order

As per the decision of the extended CWC meeting on 11.07.2015, tiffin-time demonstration should be staged in all divisions tomorrow demanding immediate settlement of the charter of demands submitted to the Chief PMG, W.B.Circle, during the program at the C.O. on 27-28 May 2015.

A savingram should be sent to the Chief PMG, W.B.Circle and respective regional PMG in the following text :

==== PLEASE REFER TO THE 15-POINT CHARTER OF DEMANDS SUBMITTED BY OUR CIRCLE UNIONS DURING THE STAY-IN DEMONSTRATION AT THE C.O. ON 27-28 MAY 2015 XXXX ENTIRE CROSS-SECTION OF POSTAL EMPLOYEES IN THIS CIRCLE ARE AGGRIEVED DUE TO NON-SETTLEMENT OF THE DEMANDS CITED THEREIN  XXXX THE ADMINISTRATIVE APATHY TOWARDS STAFF-PROBLEMS ARE SEVERELY CONDEMNED THROUGH THIS DEMONSTRATION  XXXX  IMMEDIATE SETTLEMENT OF THE ISSUES OF THE CHARTER IS DEMANDED ====
Posted by AIPEU Group 'C' WB Circle at 4:59 PM No comments: 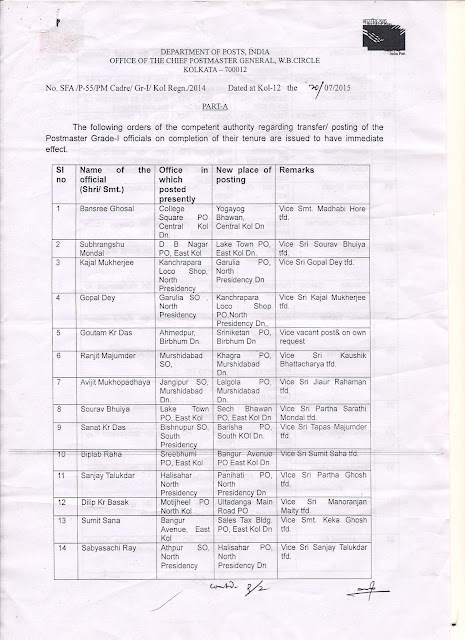 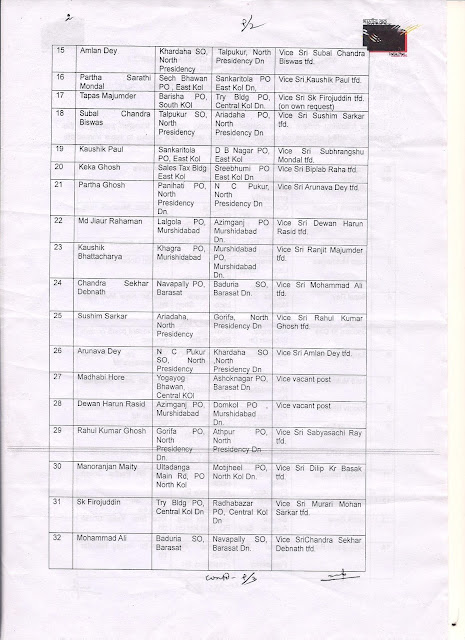 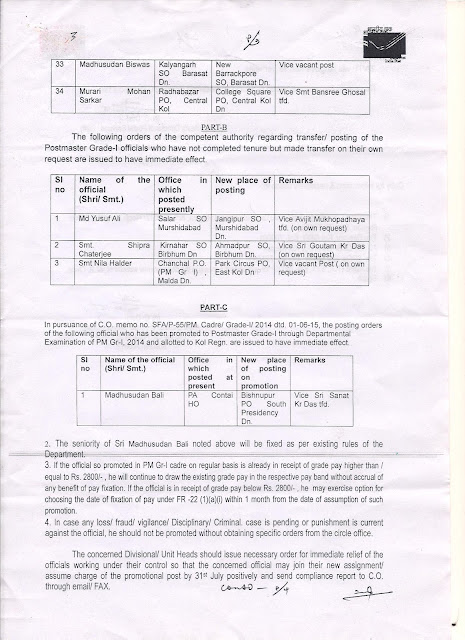 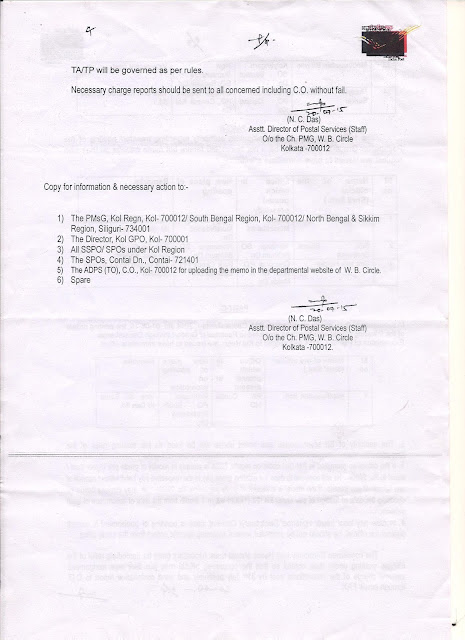 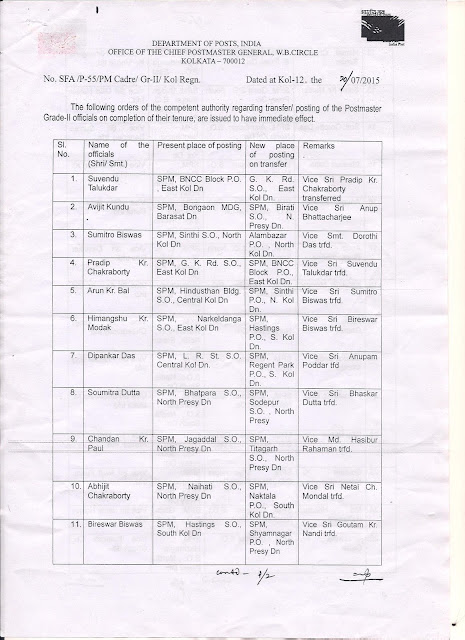 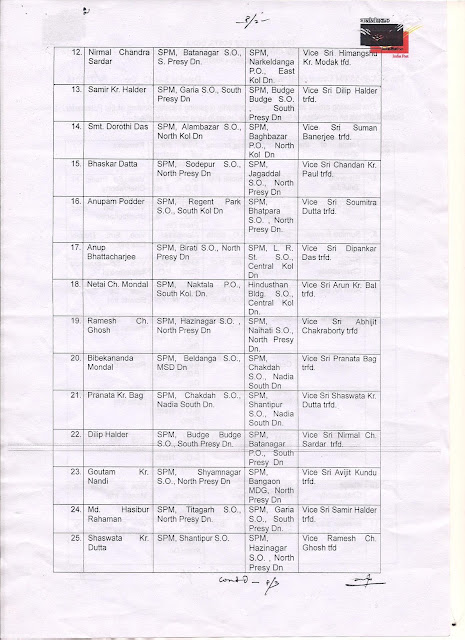 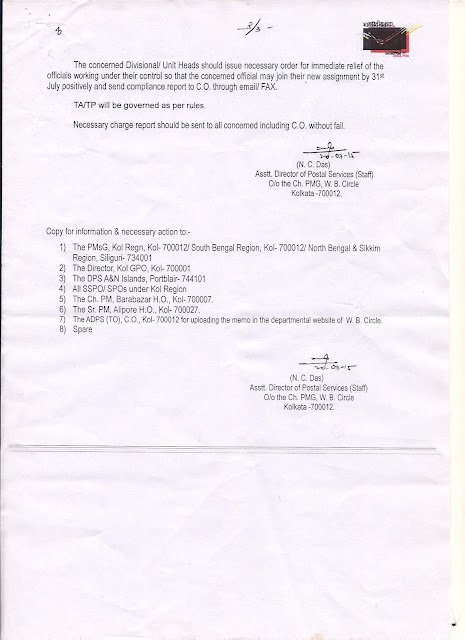 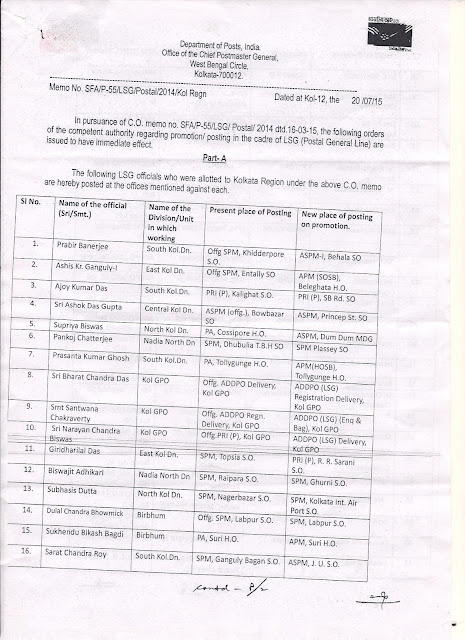 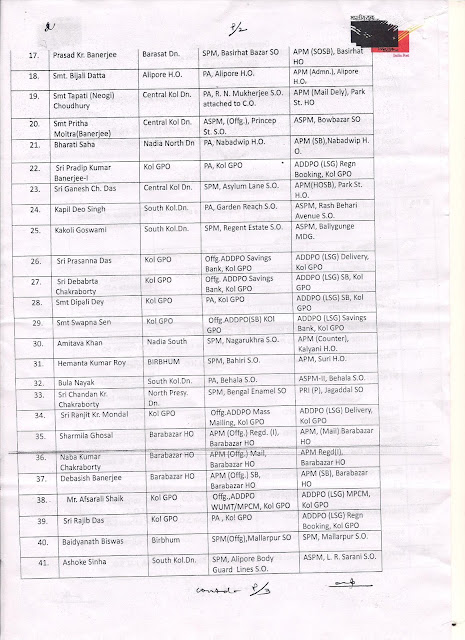 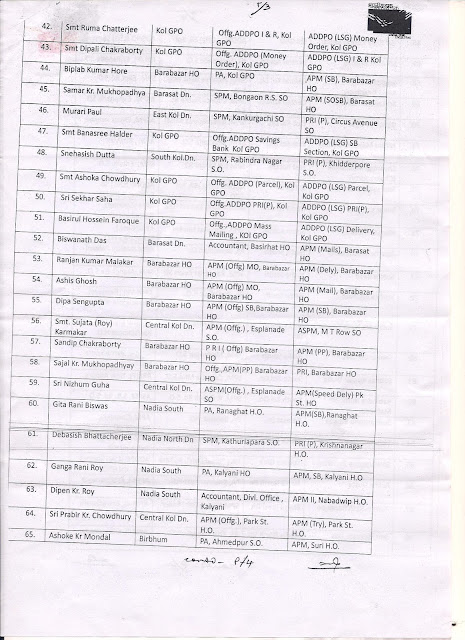 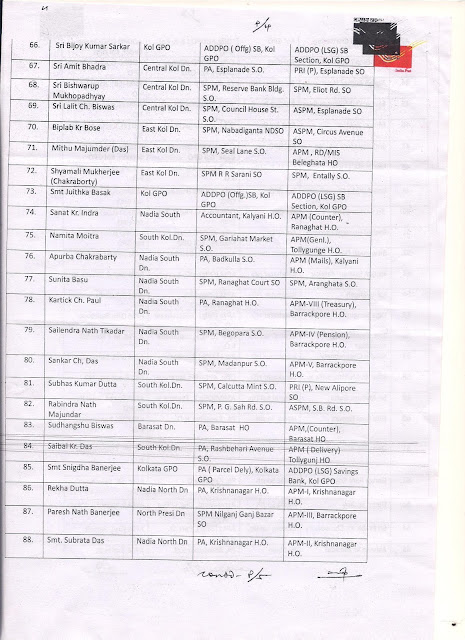 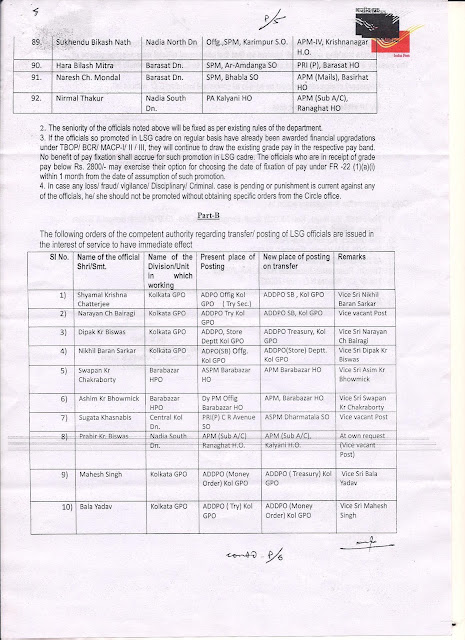 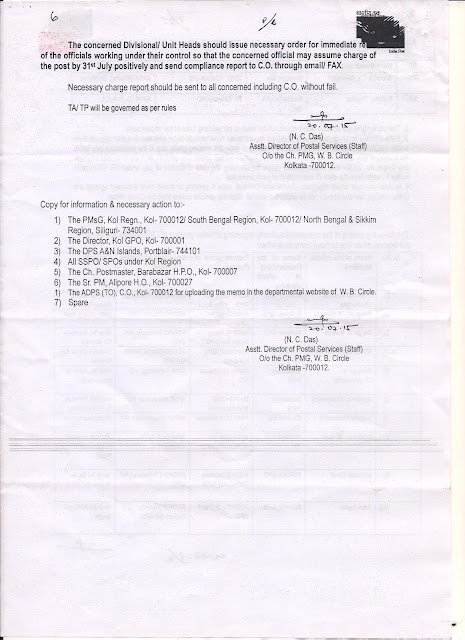 It is now almost three months that the joining procedure of the candidates have been stayed by the Directorate. We have been constantly pursuing the matter since then and the stay is expected to be lifted shortly.

Still in our opinion we should not leave the matter on assurances and better pursue further course. We are aware of the agony which the candidates and their families are passing through and also sent a resolution to the DG(Posts) and Chief PMG on 11.07.2015. To discuss on the next phase, we request the candidates to please meet us at Circle Union office (Tarapada Memorial Hall, 37, Ganesh Chandra Avenue, Kolkata-13) on 22.07.2015 at 4 P.M. 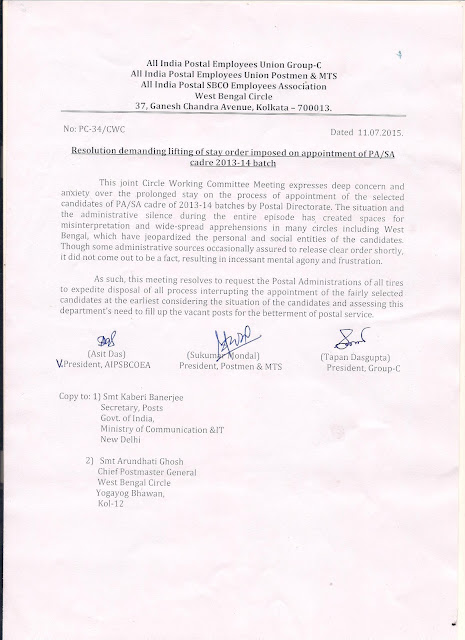 Resolution on Payment of Part-Time Workers 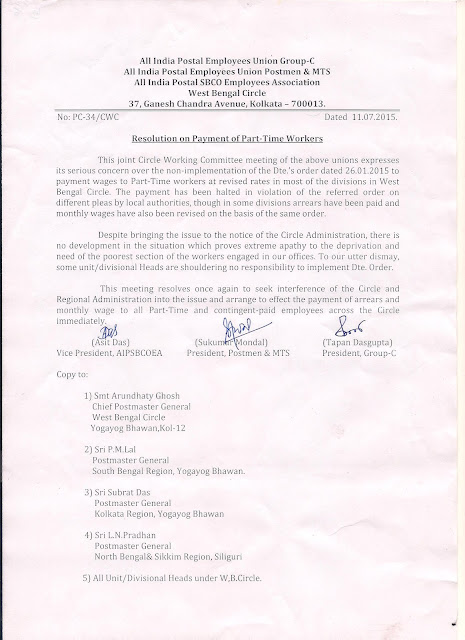 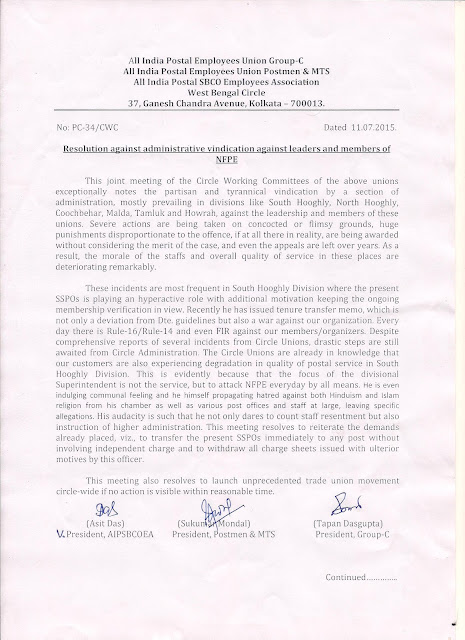 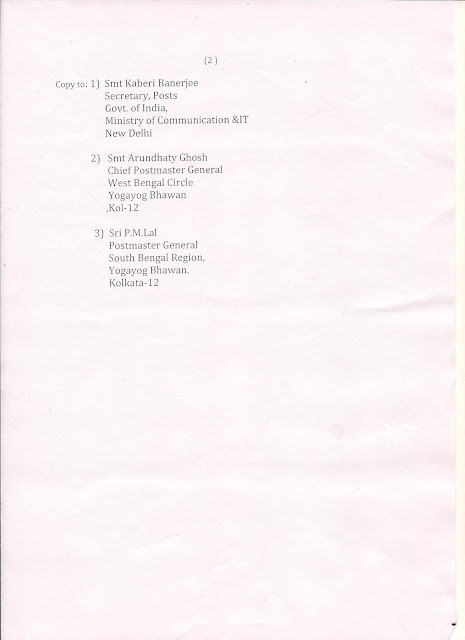 Due to some action from administrative side in case of South Hooghly Division, Programme at Circle Office scheduled tomorrow (16/07/2015) has been postponed. We are keeping watch over further consequence. However programme at Branch/Division on 22/07/2015 stands unchanged.
Posted by AIPEU Group 'C' WB Circle at 12:11 AM 3 comments:

The Joint Extended Circle Working Committee meeting recorded an excellent presence of secretaries/their representatives from all divisional unions of the Circle. The meeting was presided over by comrades Tapan Dasgupta, Sukumar Mondal, Asit Das and Ashis Dutta.

The meeting was inaugurated by Com. Tapan Dasgupta. All Circle Secretaries also spoke at different times during the meeting. A work paper featuring the main points was placed by Circle Unions for discussions over it. 9 divisions, viz. --- Coochbehar, Malda, Kolkata GPO, Howrah, Nadia South, Burdwan, Asansol, Tamluk and Birbhum division spoke, the last with special emphasis on ensuing Circle Conference and collection of advertisements for the souvenir. The Circle Unions also endorsed their request.

The deliberations were mainly based on our preparation of strikes on 2nd September 2015 and from 23rd November 2015, membership verification, administrative attacks (especially in divisions like South Hooghly, Howrah, Tamluk etc.), infrastructural problems at offices and administrative reluctance, LSG transfer memo, Postmaster cadre transfer memo etc. The problem of non-payment of Part-time employees in most of the divisions was also discussed with importance. The meeting called upon everyone to remain vigilant in the process of membership verification and the point of possibility of announcing GDS membership verification in October 2015 was also discussed.

The meeting adopted 3 resolutions ---- one on the problems of Part-time employees, one on administrative vindication on members of NFPE and the third one on the stay on appointment procedure of selected candidates in PA/SA cadre of 2013-14 batch.

The Circle Union is deeply concerned about the stay imposed by the department on their appointment procedure. The copy of the resolution will be sent to the Postal Directorate, New Delhi, demanding lifting the stay order. A program for proceeding to New Delhi with some of the selected candidates is also under discussion for finalisation.

Apart from the programs mentioned in the work paper, the following programs were finalised :


All comrades are requested to deploy maximum efforts for the success of the above programs.
Posted by AIPEU Group 'C' WB Circle at 1:25 AM 2 comments:

The joint Biennial Conference of the branch unions of Bankura Division was held at Gangajalhati High School on 21.06.2015. A well-attended rally of delegates of the conference marched through the roads of the town before commencement of the program.

In the subject committee meeting, in-depth discussions were presented by delegate comrades pertaining to all present issues those are bothering our staff-members and service of the department. The anti-staff and unrealistic actions and role of the administration also came up. The conference  elected the following comrades as President, Secretary and Financial Secretary respectively : 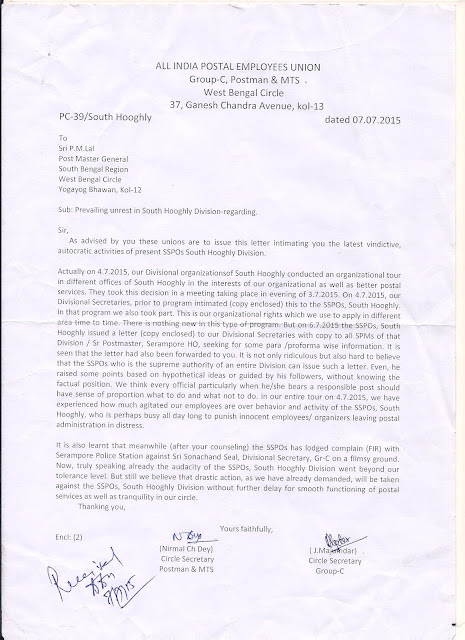 We are in full awareness that the demands placed by the Circle Union ---- to transfer the present SSPOs, South Hooghly Divn immediately and that also in a post without involving independent charge ---- are unusual. Despite non-settlement of issues and differences of opinions with different tires of administration, we do not make such demands frequently. We generally maintain overall amicable relation with administration for the sake of providing smooth service. Most of the officers also, despite their limitations, try to maintain harmony with staff side and solve cases of staff interests as far as possible.

But by the unusual partiality and expressed vendetta against NFPE along with unprecedented atrocities and punishments  against our members with the objective to reduce our membership in his regime, Sri Bidhan Chandra Das, SSPOs, South Hooghly Divn, has forced us to demand this way. AND we shall make it this time through sustained struggle. We already have made our moves, and comrades, rest assured, this move will involve all kinds of legitimate action including legal ones, if situation requires so.

When an administrator declares warfare against NFPE, there is no way back, there is no looking back. Organisational retaliation is the answer, and he will get one soon.
Posted by AIPEU Group 'C' WB Circle at 7:16 PM No comments:

ON  MEMBERSHIP  VERIFICATION : COMRADES, WE  SEEK  YOUR  ATTENTION  AGAIN 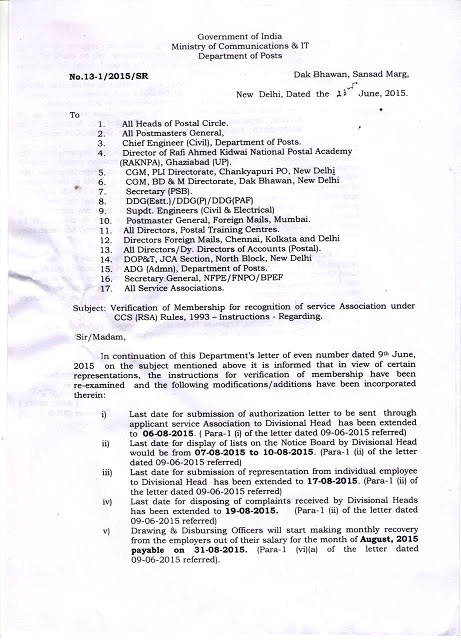 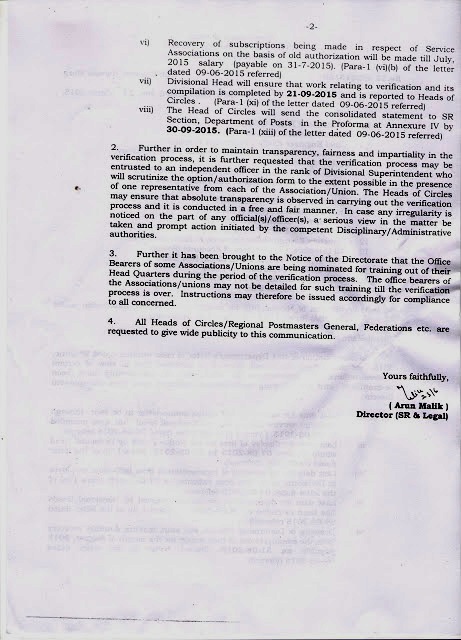 This is the circular of extension for submission of membership verification forms. The last date is now 6th August 2015 , not 6th July. The Circle Union has already issued guidelines in respect to the above order. For ready reference of all comrades, the guildeline is reproduced below once again :

We are sure that our organisers in all divisions and units have already completed collecting signed membership forms from our members and would-be members. But as the last date has been extended by the Directorate till 06.08.2015, the Circle Unions advise our comrades not to submit the forms now and hold till as close as possible to the last date. We would rather utilise this extended period of time to increase our membership even more by additional drives to those who still remain distant from NFPE for different reasons.

We firmly believe that in present crisis, if the actual scenario and our role is properly explained to everyone, none could stay away from us. Let us devote ourselves in that task, and at the same time, please maintain close contacts with our members. We need to remain absolutely serious in this highest responsibility in the organisation and none or nothing should be taken for granted. Let NFPE be the winner again. 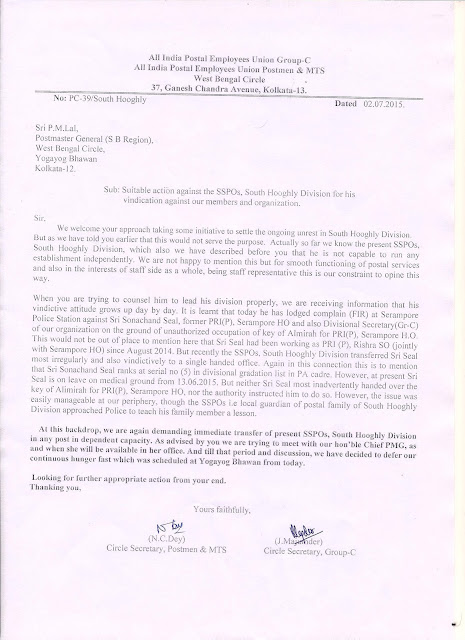