No.31011/7/2014-Estt.(A-IV)
Government of India
Ministry of Personnel, Public Grievances and Pensions
Department of Personnel and Training

The undersigned is directed to refer to this Ministry’s O.M. No.31011/3/2014- Estt.(A-1V) dated 26th September, 2014. It has been decided that the Government servants while availing Leave Travel Concession (LTC) to Jammu and Kashmir (J&K) under the special dispensation scheme allowed by the aforesaid O.M. may also travel
by private airlines subject to the following conditions:-

(i) Officers entitled to travel by air may also travel by private airlines from their headquarters;

2. Air travel by private airlines is to be performed in Economy Class only an at LTC- 80 fare of Air India or less.

3. Air Tickets to be purchased directly from the airlines (Booking counters, website of airlines) or by utilizing the service of Authorized Travel Agents viz. ‘M/s Balmer Lawrie & Company’, ‘M/s Ashok Travels & Tours’ and ‘IRCTC’ (to the extent IRCTC is
authorized as per DoPT’s O.M. No. 31011/6/2002-Estt.(A) dated 02.12.2009) while undertaking LTC journey. Booking of tickets through other agencies is not permitted.

5. The order will remain in force for a period of one year from the date of issue of this order.

sd/-
(B. Bandyopadhyay)
Under Secretary to the Govt of India

Commencement of Booking of New Holiday Home at Madurai with effect from 1.12.2014
One more new and fresh Holiday Home has been commenced at Madurai for Central Government Employees and Officers. As per the notification issued by the Directorate of Estates, arrangements started for advance booking for 20 suites in the heart of the Temple City Madurai.

Madurai is the third largest city in Tamil Nadu. It is the second largest city and urban agglomeration in the Indian state of Tamil Nadu, after Chennai and the sixteenth largest urban agglomeration of India.
The booking office is located at Plot No. C.1, Tamil Nagar, Koodal Pudur, Anaiyur (P.O.), Madurai, Pin – 625017 (Tamil Nadu) and the online booking also started from 1st December 2014. Contact numbers for the ‘Madurai Holiday Home Booking Office’ is 0452-2661891 and 2661892. 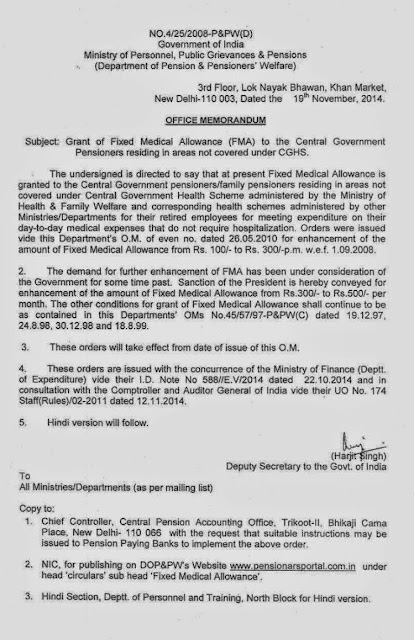 NOTICE OF CIRCLE COUNCIL MEETING TO BE HELD ON 27-28’ December’2014 IN MURSHIDABAD DIVISION. 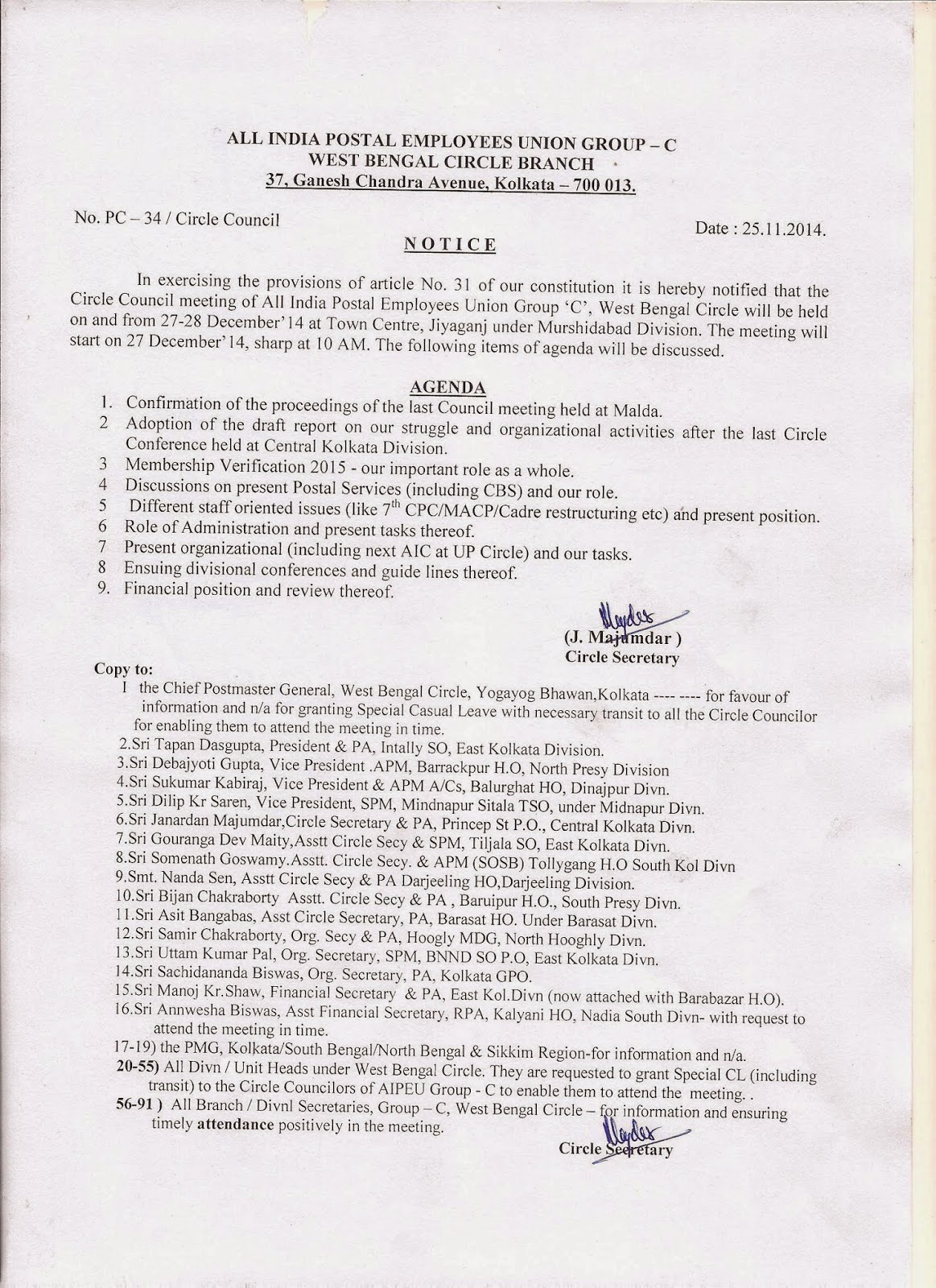 Sir/Madam,
I am directed to refer to this Directorate's letter of even No.60-9/2009-SPB-| dated 08.05.2012 on the above mentioned subject and to say that earlier, after the completion of pre-appointment formalities the candidates selected for appointment of PA/SA were required to undergo training in PTCs before they could be appointed. It often caused delay in making the offer of appointments because of non-availability of seats with the PTCs with the result that the selected candidates found opportunities elsewhere and ultimately a good percentage of them did not become available for appointment and thet vacancies remained unfilled. Therefore, in the above cited letter dated 08.05.20L2 there is no such condition that the candidates selected for appointment of PA/SA are required to undergo training in PTCs before they could be appointed.
2.         In view of the above, the Circles should take immediate action to ensure that the pre-appointment formalities of the selected candidates are completed at the earliest. For that matter, the Circles should liaison with the concerned authorities in the States so that the pre-appointment formalities are completed at the earliest. lf need be, CPMsG may use their good offices to expedite the completion of formalities.
3.         On completion of the pre-appointment formalities, the candidates may straightaway be issued offer of appointment by the Circles. This would motivate them to join as PA/SA immediately. Thereafter, when they join, they may be deputed for training as soon as the slots become available in the PTCs. Pending their training in PTCs, the Circles shall issue their posting orders and commence their in-house training chalking out course, as far as possible, based on the PTC syllabus depending on the resources available with them. The in house training that may be imparted to the candidates by the Circles shall in no way be treated as substitute for the formal training to be imparted by PTCs. Till they are trained by PTCs, they may not be detailed on sensitive seats nor deputed to man the counters and may be posted in back office etc. under effective supervision.
Yours faithfully,
sd/-
(Alka Tewari) 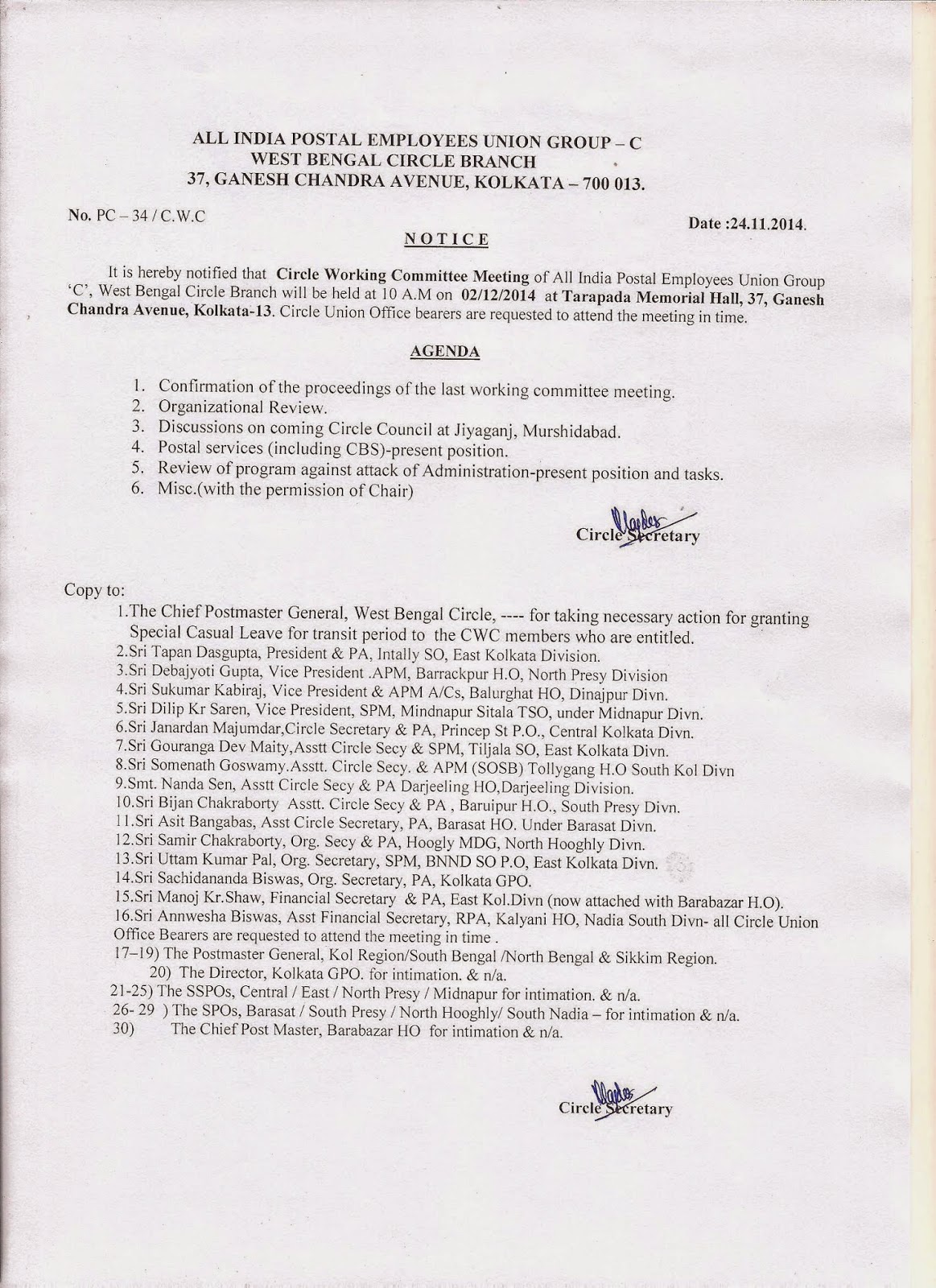 ORDER RELETED TO RE INTRODUCTION OF KVP 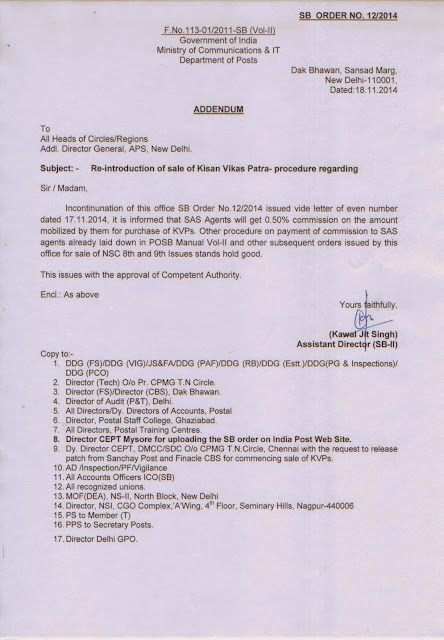 A meeting of Postmaster cadre sub committee, West Bengal Circle will be held on 28th December, 2014 (Sunday) at Jiaganj Municipality Hall, Dist. Murshidabad at 11 am. Com R.N.Parasar, Secretary General, NFPE and other Circle leaders will attend the meeting.

All the members, listed below of Postmaster Cadre Sub Committee are requested to participate the meeting in time. 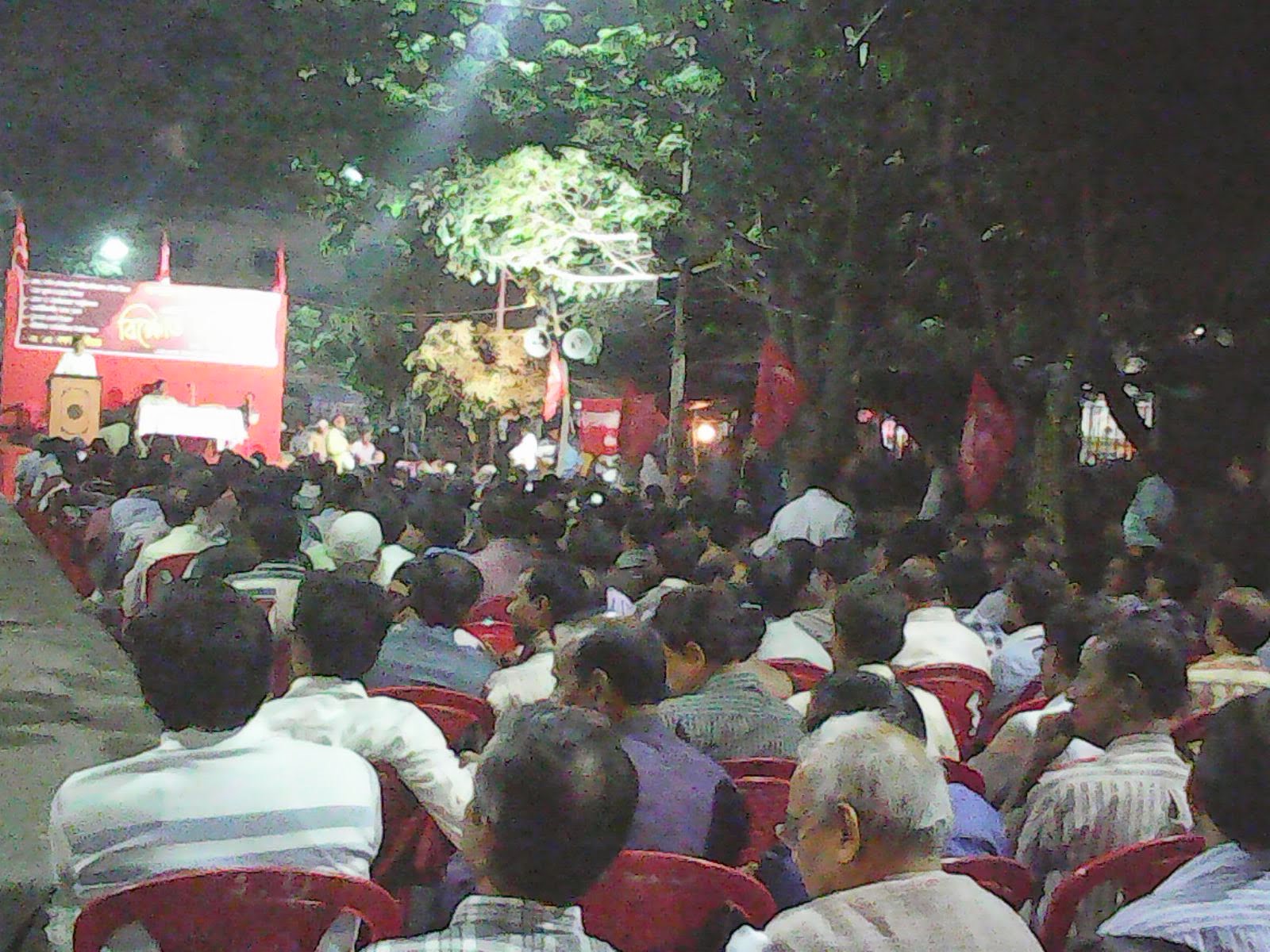 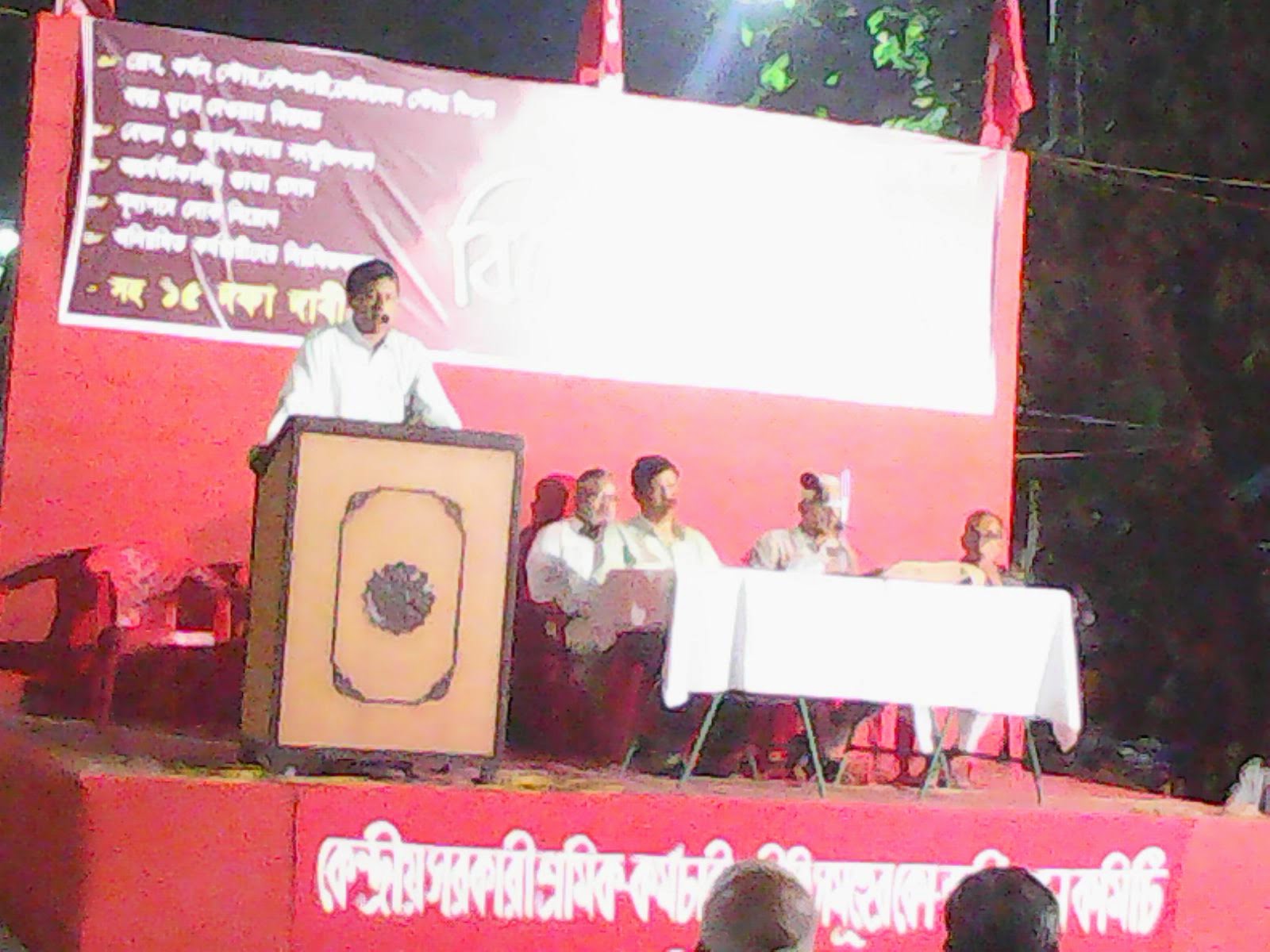 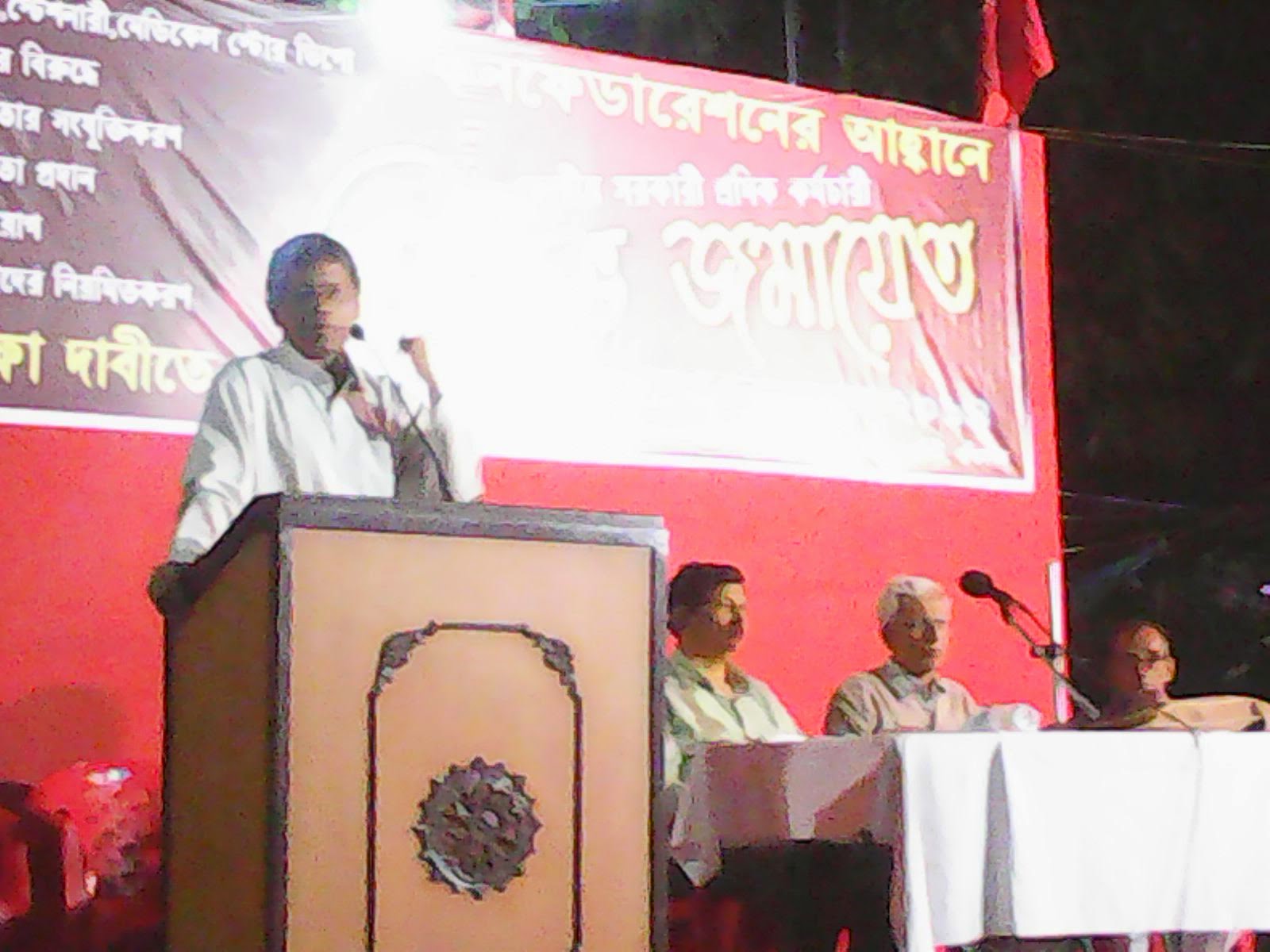 Discontinuation of Ad-hoc promotion of officials / officers of the Department of Posts, consequent upon refusal to accept regular promotion to Postal Services Group 'B'cadre and Junior Time Scale of Indian Postal Service Group 'A'