HOLD  DEMONSTRATION  TOMORROW  AT  DIVISIONAL  HQs  AND  BIG  OFFICES  AT  THE  CALL  OF  CGCC,  WEST BENGAL
The Coordination Committee of Central Govt Employees and Workers, West Bengal, has called to hold demonstration tomorrow against the anti-people and unprecedented price-hike of diesel, limited supply of LPG cylinders at subsidised rate and allowing Foreign Direct Investment in Retail Market. The country has already been shaken up receiving the blow from its own Govt.
Please refer to our demands for the strike on last 28th February, where price-rise was one of the prime issues. This decision of the Govt will further aggravate the situation and while the low-middle class and poor have to suffer the most, Central Govt employees are not going to be spared from the heat. Already we have placed demand of D.A. merger from 01.01.2011 which has not been accepted. The demand of revision of pay through new Pay Commission is also there. While there is already serious job crunch in our country, the 'FDI in retail' decision is soon going to leave more people jobless after a possible initial temporary inflation. We all shall be compelled to purchase items at more costs from the corporates once they manage to capture the retail market satisfactorily. This is the reason behind the loud applause of the corporate house and their media for the Govt.
Concerned Ministry has already published a big notice in all leading dailies with fabricated statistics. The fallacies in that notification has also been identified. Our comrades should go through all these documents carefully to equip themselves. Please note that this is a part of the sustained struggle and has direct relation to the ensuing national-level strike called on 12th December 2012.
Our comrades are requested to please hold the demonstration with all seriousness at Divl Headquarters and big offices at recess hours.
Posted by AIPEU Group 'C' WB Circle at 11:27 PM No comments:

HOWRAH  CIRCLE  ZONAL  MEETING  HELD  AT  CHINSURA
The Circle Zonal meeting of Howrah zone (Howrah, South Hooghly, North Hooghly, Burdwan & Asansol Divisions) was held at Union building of North Hooghly Division at Chinsurah on 16th September 2012. Secretaries or their representatives of each division in the zone were present in the meeting.
The meeting discussed the local problems, review of the 28th February strike, preparation for ensuing 12th December 2012 strike, preparation of ensuing State Conference of CGCC at Howrah, discussion regarding trade union classes, blood donation camps and cultural programs organised by the divisions etc. Divisions mentioned their problems lying at Circle level among which some had been solved or had developments. For the remaining, Circle Unions would continue to follow up.
From Circle Unions Comrades Janardan Majumdar, Manoj Shaw (Gr-C), Sanatan Das, Sukumar Mondal (P-IV), Sukumar Bose and Tapan Bharati (GDS) were present in the meeting. The meeting selected Comrades Samir Chakraborty, Pranab Das and Sukumar Bose as zonal conveners.
Posted by AIPEU Group 'C' WB Circle at 11:04 PM No comments:

The demonstration of Casual Labourers and Contingent-paid employees at each Circle Office in India on 19th September 2012, called by their All India Union, has been deferred for now as declared by their CHQ. Comrades are requested to please bring this news into the attention of their Divisional Secretaries immediately.
Posted by AIPEU Group 'C' WB Circle at 10:29 PM No comments:

HOWRAH   DIVISION  HOLDS  ANNUAL  'SANGEET  SANDHYA'  FOR THE  11th  CONSECUTIVE  YEAR : KUDOS  COMRADES
Howrah Divisional Unions organised their traditional annual cultural evening on 8th September 2012 at Sarat Sadan, Howrah. Apart from cultural programs, financial assistance and book grants etc. had also been provided to the meritorious sons and daughters of our financially suffering comrades. They have also honoured an artist of Howrah who paints with his legs. Officers of the departments, our comrades from other divisions were present in the evening. From Circle Union, Com. Asim Deb (Group-C) and Com. Sanatan Das (P-IV) were present. Representative of 'GANADARPAN' were also there to support the simultaneous program of eye and body parts donation after death.
Remarkably, comrades of Howrah Division had also handed over an assistance of Rs.5000/- to Circle Union for the family of Late Com. Balindranath Roy, ex-Part-time Nightguard, Domohani S.O. (Jalpaiguri Division), who was brutally murdered by miscreants in a nocturnal effort of robbery in his office.
The Circle Unions have high regards to the consistency of the commitment with which the leaders and general members in Howrah Division is carrying on with the program years together. Hats off to the comrades.
The details of the program with photos are available at this link : http://aipeugrchowrahdiv.blogspot.in/2012/09/a-historic-effort-sangeet-sandhya-2012.html#more . We suggest all comrades to get inspired by going through this link.
Posted by AIPEU Group 'C' WB Circle at 10:25 PM No comments:

NEXT  MEETING  OF  THE  CIRCLE  UNION'S  SUB-COMMITTEE  OF  POSTMASTER  CADRE  ON  7th OCTOBER  AT  BARASAT
The next meeting of the Postmaster Cadre Sub-Committee is scheduled to be held on 7th October 2012, Sunday, at Karmachari Bhavan, Barasat (near Rly station & DM office).
Please note that on the same day, the Trade Union class of Barasat Division is also scheduled. The comrades of the Sub-Committee are requested to please attend the venue at 10 A.M. and after taking lunch, participate in the first class by Com. Tapan Dasgupta on 'Samaaj Bikasher Dhara'. Thereafter, the sub-committee meeting will take place from 2 P.M., wherein Circle Secretary Com. Janardan Majumdar will be present.
Sub-committee members are requested to please book their tickets / reservations if required. Conveners may please make personal contacts with them.
Posted by AIPEU Group 'C' WB Circle at 1:05 PM No comments:

TRADE  UNION  CLASS  AT  BARASAT  DIVISION  ON  7th OCTOBER  PRECEDED  BY  CIRCLE  OFFICE  BEARERS  MEETING
Barasat Divisional Unions are  organising a Trade Union class on coming 7th October 2012, Sunday, at Karmachari Bhavan (near District Magistrate Office neighbouring Barasat Railway Station). Circle Unions will be holding Circle Office Bearers meeting a day before, i.e., on 6th October, at the same venue. Along with the comrades of Barasat division, Circle leadership will also be participating in the class.
The class will be taken on two subjects in two sessions. The first class will commence at 10 A.M. The subject is 'Samaaj Bikasher Dhara' by Comrade Tapan Dasgupta. The second class will be on 'History of P & T Trade Union Movement and organisation' by Comrade Shib Sankar Roy, commencing at 1:30 P.M. There will be limited arrangement of staying at night on 6th October for comrades from distant divisions only. The program is expected to conclude at about 5 P.M. on 7th. Circle office bearers are advised to please book their tickets / reservation accordingly in consultation with respective Circle Unions.
After completion of this program, the classes on these two subjects have to be organised by each division in later course. Divisional leaderships may start an initial discourse at their levels for preparations.
Posted by AIPEU Group 'C' WB Circle at 9:42 PM No comments:

CIRCULAR  HAVING   STAND,  GUIDELINES  AND  TASKS  OF  OUR  COMRADES  REGARDING  POSTMASTER  CADRE 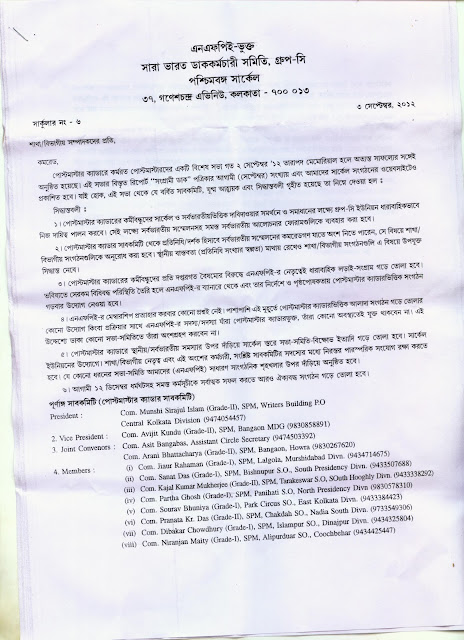 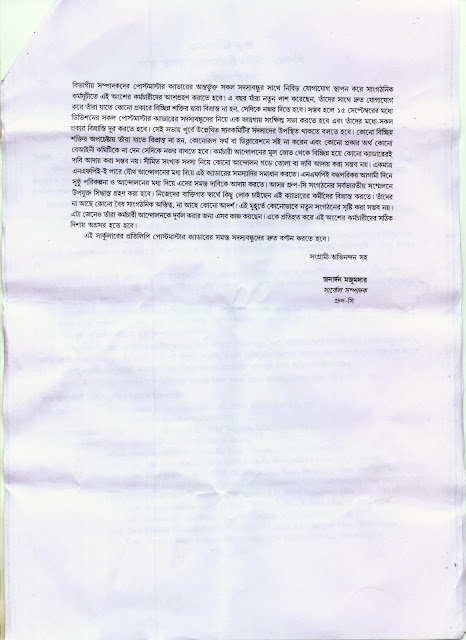 The above circular is issued by the Circle Union after a threadbare discussion with the outcome, views, opinions expressed by comrades in the extended meeting of the Postmaster Cadre on 2nd September and also considering the present situation realistically. All comrades are requested to please give the content of this circular wide publicity among all, not only among comrades belonging to the Postmaster cadre.
Our Divisional/Branch Secretaries are required to bear some additional responsibilities to comply with the points of the above circular. The Circle Union assures that the problems of the cadre will be dealt with all seriousness as far as possible by us, and the remaining will be addressed to and presented before the All India Group-C Union and Federation (NFPE).
PLEASE STRENGTHEN NFPE, AND ONLY NFPE,  FOR OUR BETTER TOMORROW.
Posted by AIPEU Group 'C' WB Circle at 9:52 PM No comments: 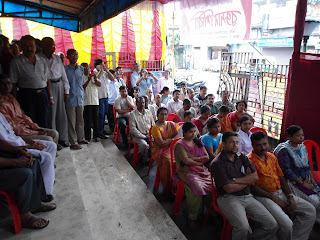 Gathering of the enthusiastic comrades 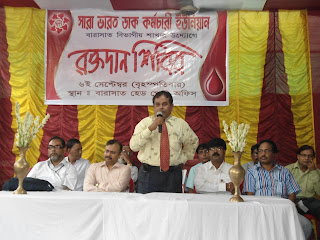 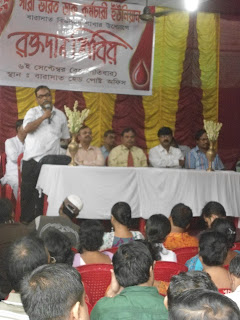 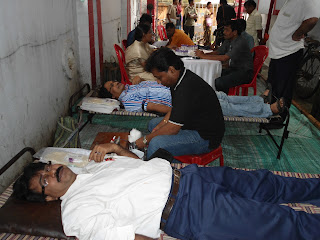 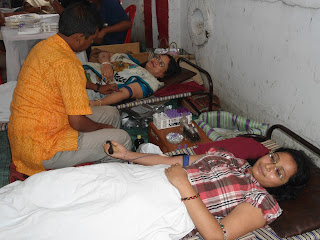 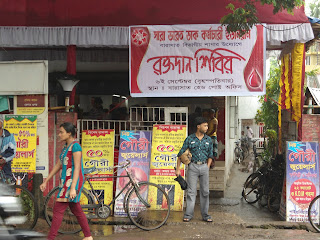 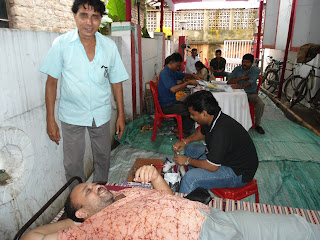 SIT-IN  DEMONSTRATION  PROGRAM  TOMORROW  CALLED  BY  CIRCLE  JCA  AND  BY  OUR  ALL  INDIA  PART-TIME  ORGANISATION
Please refer to the blog in this page dated 30th August below, where the programs of 4th September 2012 were given. As mentioned therein, a 4-hours sit-in demonstration has to be organised by the Circle JCA (West Bengal Circle Unions of NFPE & FNPO) on the demands against outsourcing of permanent work in RMS wing as well as the unilateral introduction of new mail schedule from 6th August 2012 for the reasons discussed in the referred blog in details. A memorandum to those effects has to be sent to the Chief Postmaster General and PMG (MM), West Bengal Circle. The memorandum should preferably be signed by the Divisional JCA, i.e., by all secretaries of NFPE & FNPO, if possible, otherwise may be submitted separately.
Please also refer to the same blog regarding holding of a sit-in demonstration simultaneously by our All India Part-Time organisation on the much-discussed demands of the Part-time/DRM/Contingent-paid comrades. The memorandum has already been circulated among the Divisional Secretaries of Part-time organisation during the Circle Conference held in South Kolkata Division few days back.  This memorandum is required to be signed by our Divisional Secretaries only, not by Divisional level JCA.
All of our Divisional/ Branch Unions will please take the responsibilities towards success of both the above programs.
Posted by AIPEU Group 'C' WB Circle at 2:47 PM No comments:

MEETING  OF  POSTMASTER  CADRE  TOMORROW  AT  CIRCLE  UNION  OFFICE
As notified, the extended meeting of the comrades in Postmaster Cadre will be held at Circle Union Office (Tarapada Memorial Hall) tomorrow at 10-30 A.M. All officials belonging to Postmaster cadre are requested join the meeting in time to discuss the notified agenda.
It may please be recalled that a sub-committee (comprising of 9 comrades) of  the Group-C Circle Union was formed on 11th March 2012 from a general meeting of Postmaster Grade-I & II held at Kolkata GPO . Although there had been few informal discussions apart from the regular contacts with the Circle Union over phone, all comrades could not physically take part in such a wide discussion like tomorrow's, due to nature and pressure of the duty of the comrades. All Divisional / Branch Secretaries have already been notified to intimate all comrades to attend the meeting. The following agenda are scheduled to be discussed ----
All comrades are requested to reach the venue in time.
Posted by AIPEU Group 'C' WB Circle at 10:42 AM No comments: