EXTEND  ORGANISATIONAL  HELP  TO  THE  AID  OF  VICTIMS  OF  UTTARAKHAND  DISASTER

Everyone is aware of the unprecedented disaster in Uttarakhand which has left lakhs of our countrymen in the nightmare of death and distress. Help is rushing in there from all parts of the country and abroad in the shapes of personal contributions, organisational helps and state aids. We inherit the tradition of discharging our responsibilities extending our help to the victims of the fateful incident.

The CGCC, West Bengal has called for the contribution of Rs.50/- and Rs.30/- from employees of different categories. As the situation demands immediate response, all comrades are requested to complete the collection in their units / divisions within first week of July and send the total collection to the Circle Unions. Circle Unions will handover the entire collected amount to CGCC.

We have learnt that our department is also considering to appeal for contribution of one-day salary from each employee. Circle Unions welcomes such call and would like to request all comrades to come forward voluntarily to donate the amount, but at the same time, is also of the opinion that the decision of such appeal should also be effected in the spirit of request, i.e., options should be called for such contribution. It must not be imposed like an administrative decision and make our employees to render the amount against their will. A letter will be issued to Circle Administration after circulating the decision.

The situation will be reviewed in the Circle Working Committee meeting on 12th July 2013 at Tarapada Memorial Hall.
Posted by AIPEU Group 'C' WB Circle at 10:54 PM No comments:

Dear Sir,
I would like to draw your kind attention to the subject as noted above. As per Ministry of Finance O.M no. 10/02/2011-E.III/A dated 07/01/2013(copy enclosed) in cases of promotion from one post to another where the promotional post carries the same Grade Pay as the feeder post, the fixation of pay in such cases will be done in the manner as prescribed in Rule 13(i) of the CCS (RP) Rules,2008, provided fixation of pay in such cases was done prior to 01.01.2006 in terms of Ministry’s aforesaid OM no. 169/2/2000-IC dated 24.11.2000. The Rule provides for fixation of pay by way of addition of one increment equal to 3% of the sum of the pay in the pay band and the existing grade pay(rounded off to the next multiple of 10)to the existing pay in the pay band and then fixing the pay in the promotional post. But surprisingly no Divisions in this Circle except Park St H.O under Central Kolkata Division has been following this guideline of Ministry of Finance.
Therefore, this union urges upon you to intervene in this matter personally, so that Post Master Grade officials may get financial benefit at earliest.
A line in reply in this matter will be appreciated.
.

Thanking you,
Yours faithfully, 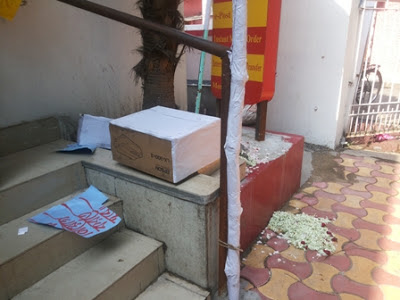 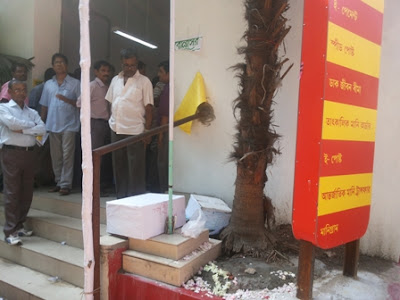 The Group-C Divisional Conference of North Kolkata Division, arranged at Ghughudanga Post Office on 16th June 2013, has been attacked and ransacked by political hooligans identifying themselves as belonging to the ruling political party of West Bengal. Some comrades have also been physically assaulted and injured on their way back to home.

The hoodlums came into action after the open session, when the SSPOs, Notth Kolkata Divn, Sri M.K.Nag was still present among the comrades and Circle leadership. They tore up the Red Flag of NFPE, ransacked the Martyr Column garlanded with flowers. They had only one mandate --- no 'red' organisation cal hold their programs here. Though our comrades tried their best to make them understand that according to our constitution approved by the Central Govt, that conference had to be held, it was of no use as the miscreants had political vendetta.

The brave comrades of North Kolkata Division did not budge and still finished the conference, electing Com. Subhas Acharya as President and Com. Jayanta Malakar as the Secretary. While returning home, some of the comrades were again attacked by those miscreants and got severe injuries. FIR was filed by our Divl Union, but as usual, the police nowadays is the finest example of deaf and dumb spectators in the hands of this particular political party. Though the entire episode was witnessed by the Divl Administration, no administrative action has been reported so far.

The Circle Unions request all the branch and divisional unions to hold demonstrations at each unit/ divl HQ on 20th June 2013 and submit a resolution in the following text  addressing the Chief Postmaste General, West Bengal Circle with copies to all regional PMsG.

'This demonstration expresses its deepest concern over the political attack on the Group-C Divl Conference of North Kolkata Divn on 16.06.2013 and condemns the administrative inaction even to protect the constitutional provisions set out by the Department itself. The administrative reluctance is sheltering the gradually increasing political interference inside our departmental operations and as a matter of fact, thus inviting more atrocities endangering the security of staffs and offices.

This demonstration demands immediate appropriate and visible action on the parts of administrations of all tiers in West Bengal Circle so that there is no space left for such political interference and vendetta and such attackers also face suitable consequences. Be it further resolved that if the administration still remains reluctant to ensure adequate security for our staff-members all over the circle, it will only expedite vigorous trade union movement of any degree, responsibility of which will befall on the administration.'
Posted by AIPEU Group 'C' WB Circle at 11:37 PM No comments: