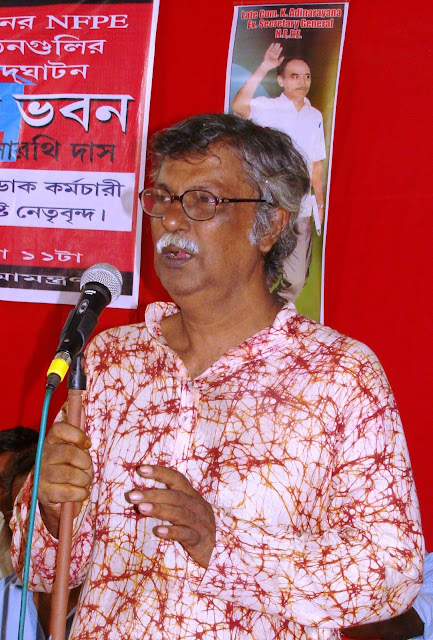 " LOVE YOUR COLLEAGUES UNCONDITIONALLY. COMMIT YOURSELF TO THEIR CAUSES. THROUGH THIS PROCESS, WE SHALL GRADUALLY DECLASSIFY OURSELVES AND BECOME A TRUE FRIEND TO THE HAVE-NOTS. "

Comrade Partha da is no more among us. The clock struck 5-40 today evening, when he breathed his last at a North Kolkata nursing home. With his untimely departure, we lost an inimitable leader, affectionate visionary and one among those rare believers of our ideology --- to whom the first and last word of trade unionism was 'to love and help your colleague all out, and help the people all around'. To say that he was our former Group-C Circle Union's President who gave up his post for inclusion of younger generation, is not sufficient to draw him in words, or measure his contributions. It was just a post we offered him, he was bigger, far far bigger than it.

His entire life was a flame of inspiration. In his early life, he was imprisoned by the police of the oppressing State Govt during those days for participating in democratic movements. He entered service in P.A. cadre in undivided Presidency Division on relaxation ground in last phase of 1970. His deceased father also was leader of our union. Within a couple of years, he was one of the natural choices for leadership. In the division having largest ED (now GDS) membership, he magically created huge response and unity by his enormous efforts, sincerity and love for the comrades.

In 1976, he arranged an overnight ED convention at Kakdwip where Com. Adinarayana, Sadaram Tanwar were present. It created huge impression. In 1982, he was the pioneer to arrange historic 'ED Rally' from South 24-Parganas (from Kakdwip to Kolkata) which was not originally planned by Circle Unions, but later proved to be a huge success and participation by ED comrades.

'Pay-scale for ED Agents on pro-rata basis of corresponding departmental posts' --- was the demand raised first by Com. Partha Das, placed as an additional point on Circle Union's resolution on ED demands during Beleghata Circle Conference (at Gurudas College) with categorical figures of suggested pay. A committee of Circle Union led by Com. Lalit Mohan Mukherjee with our Accountant comrades examined and accepted it. Later, it was raised first by West Bengal Circle Union at All India level, which ultimately culminated to present TRCA.

In 1991, Com. Partha da was suspended for leading a movement against the administration, but on concocted allegations. Later he was reinstated but transferred to Dinajpur Division under Rule-37 as a punishment. His capacity of leading, hypnotic popularity, absolute yet democratic control over the organisation and thundering motivational speeches drew awe and respect of even the administration and was terror to corrupted ones.

Later, he was brought back to North Kolkata Division under Rule-36 and was elected as Group-C Circle President. All through his life, he continued inspiring and bringing youngsters to leadership and made them fight against corruptions ans social evils. Today, many of our organisers in West Bengal are his contributions. He stepped off his Circle Union post in 2009 for inclusion of new generation.

This great leader did everything for NFPE without ever caring for himself. His physical condition deteriorated since last 10 years, but he made it going somehow. We saw him attending programs limping in leg-pain, but all smiles in face. Being with comrades was his ultimate happiness. But his body took the toll to take him away from us too early. He retired from service on 30th April,2012 and was only 64. He is survived by his wife (who also came from a postal family background), only son and daughter in-law. We extend our deepest condolence to them.

Comrades, his body is kept at 'Peace Haven' tonight. Tomorrow it will be brought to our Circle Union office (Tarapada Memorial Hall, 37, Ganesh Chandra Avenue, Kolkata-13) at 12 noon, for paying our last respect and homage. Please join us.
Posted by AIPEU Group 'C' WB Circle at 11:45 PM No comments: 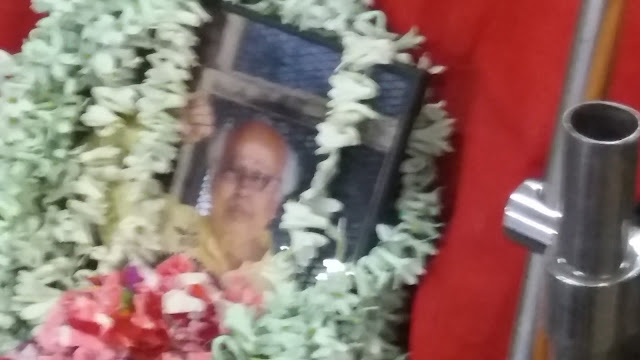 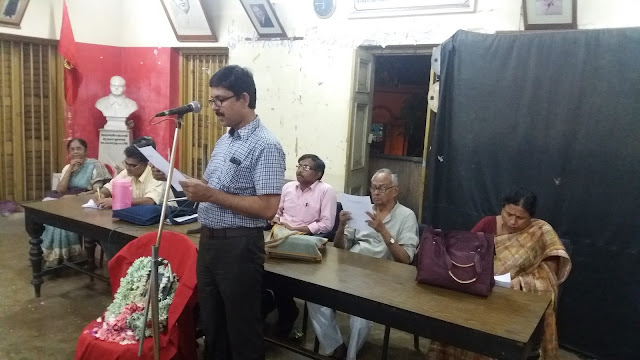 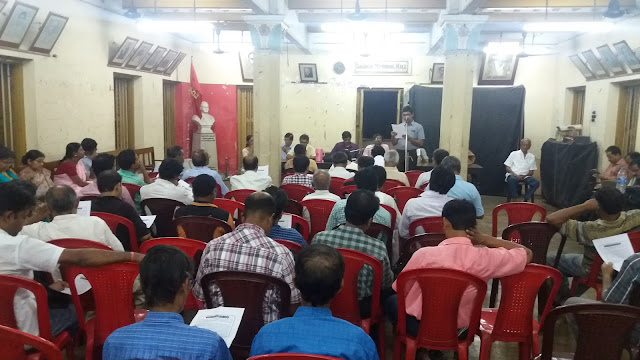 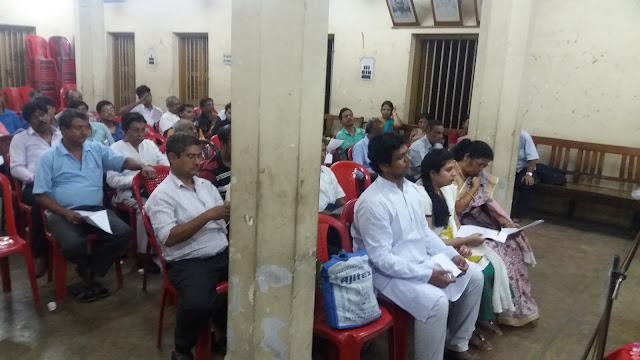 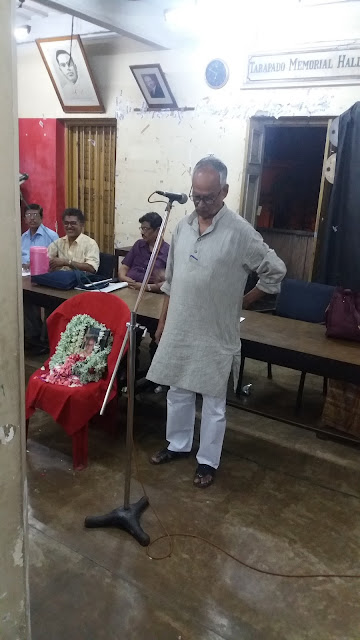 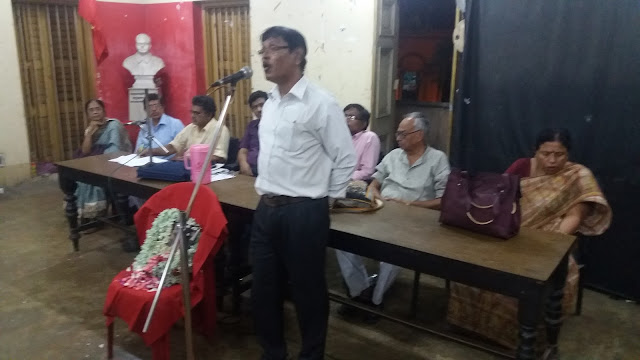 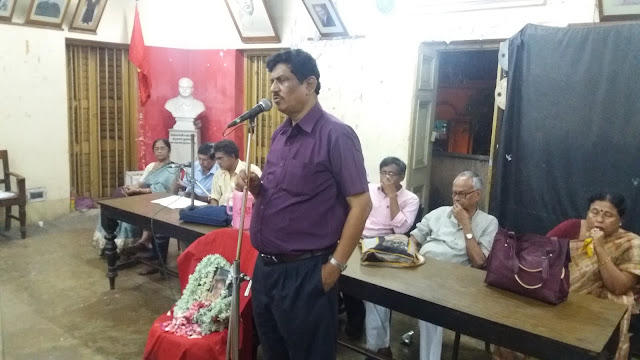 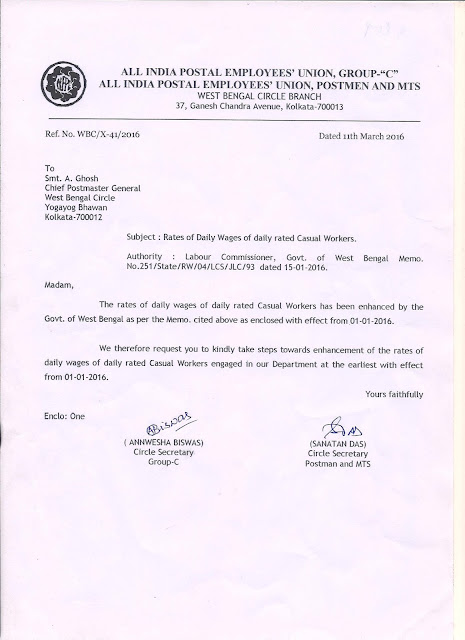 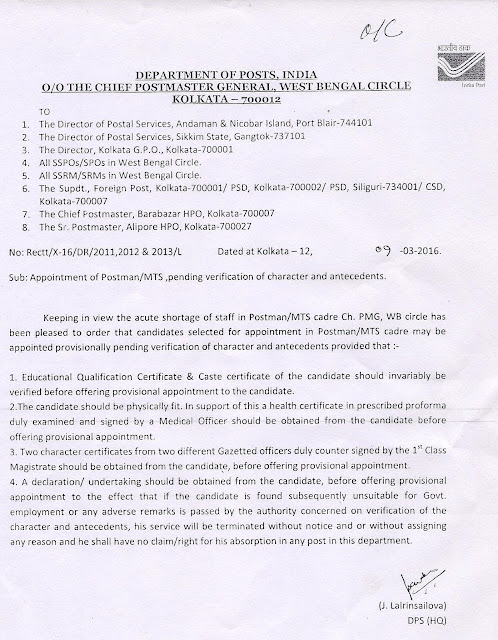 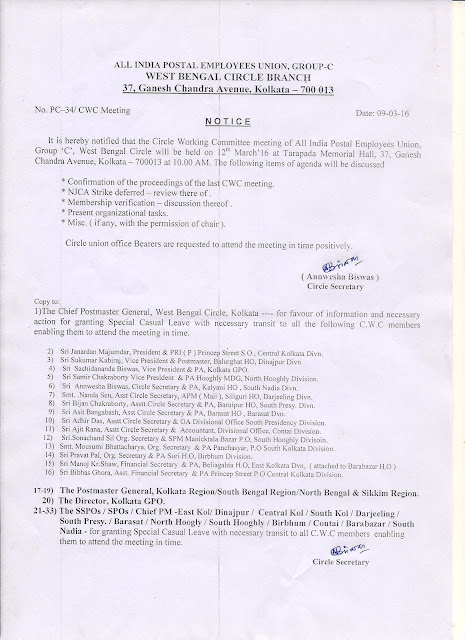 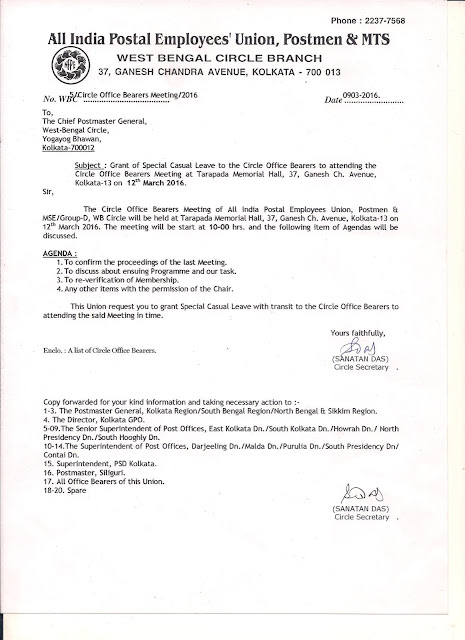 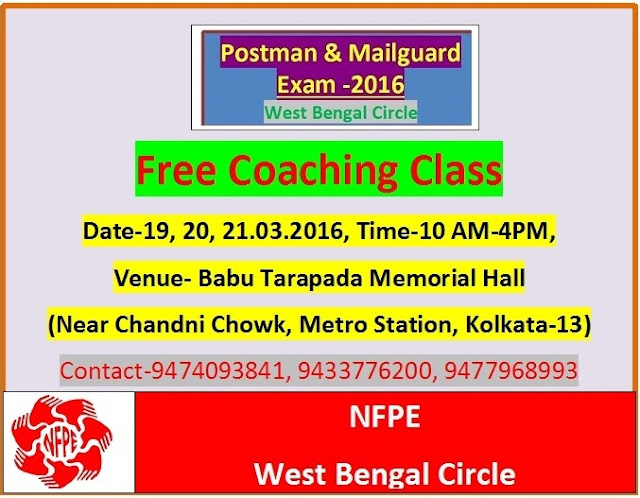 The program called by NFPE group of Circle Unions to hold a 5-hours cease-work on 03.03.2016 is decided to be deferred. The program was called in demand of settlement of 5-point charter of demands including CBS, recruitment in all cadres including GDS, regular payment of wages to all part-time workers etc., submitted to the Chief PMG from demonstration at the C.O. on 29.01.2016. The same charter has also been forwarded by all divisions from subsequent demonstrations at their levels.

The items of the charter has already been discussed with the Chief PMG by the Circle Unions in the 4-monthly meeting with her on 17.02.2016. Some actions have been taken by the department, though inadequate, like release of order of enhancing connectivity speed of CBS link. Another round of discussion with her will also follow shortly.

We have the information that oppression on the staff is still suffocating and some atrocious actions have been taken by local administration in some divisions like Midnapore, North Hooghly etc. We shall raise these issues with documents before the Chief PMG during the forthcoming discussion. At present, the Circle Unions have jointly decided to halt the program temporarily and all leaders are requested to prepare to launch the program within very short notice if the dialogue fails.
Posted by AIPEU Group 'C' WB Circle at 12:42 AM No comments: