Comrades, NFPE West Bengal Circle has called to hold demonstration today at all non-city divisional headquarters at recess hours against the delay of Central Govt in issuing the order for payment of arrear bonus for the year 2014-15 to the GDS employees. Aggravating the situation more, the Govt has pushed the issue to the Kamalesh Chandra Committee, which has no relation to the payment of arrear bonus. The GDS employees already received bonus for the year 2014-15 on the ceiling of Rs.3500/-, so, they naturally are entitled to the remaining portion of the bonus on revised ceiling. But the action taken by the Govt is hinting that there is no intention of the Govt to make the payment to the GDS employees.

Please mobilise maximum number of GDS employees to the divisional offices today, adopt the following resolution from the demonstration and send it to the Chief Postmaster General, Secretary (Posts) and the Hon'ble Minister of Finance, Govt of India.

Please note that the demonstration will be held at Yogayog Bhawan as per the call of the All India Union on 3rd October 2016 at recess hours. All comrades of Kolkata divisions are requested to attend the program at the C.O. on that date. They need not hold the program tomorrow.

<<TEXT OF THE RESOLUTION>>

This joint demonstration of NFPE Group of Unions, .................. (name of division/unit) records its deepest grievance and strongest resentment against the delay in issuing the order for payment of arrear bonus to the GDS employees for the year 2014-15. While the bonus was sanctioned and paid to them, non-granting the arrear amount only means denial to justified demand and entitled benefit.

This demonstration further resolves to record that referral of the matter to the Kamalesh Chandra Committee is yet another cruel deprivation of the GDS employees as this committee ought not have any say on any benefit already paid before its constitution and payment of only arrear portion is now questioned.

Be it now resolved that these unions under the banner of NFPE will launch and participate in vehement trade union movements in coming days if the arrear bonus is not granted and paid to the GDS employees through a speaking order within a reasonable period, responsibility of which will entirely lie on the administration.

(signature of the President) 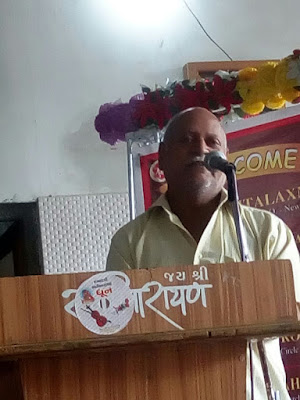 FAREWELL  FOREVER.......  COMRADE  DESHRAJ  SHARMA
Comrade Deshraj Sharma, former General Secretary of erstwhile AIPEU Postmen & Gr-D (CHQ), now AIPEU Postmen & MTS, has left us yesterday, the 24.09.2016, at about 9 P.M. after sustaining repeated heart attacks. He was 70.
Comrade Sharma took up the responsibility of the G.S. as the successor of Com. Ashok Bhattacharya and kept the spirit of his organisation high. During his days of leadership at Delhi, he also contributed our Federation (NFPE) as its Treasurer and later, as Deputy Secretary General.
West Bengal Circle Unions salute the departed leader and extend its deepest condolences to the bereaved family.
Posted by AIPEU Group 'C' WB Circle at 2:51 AM No comments: 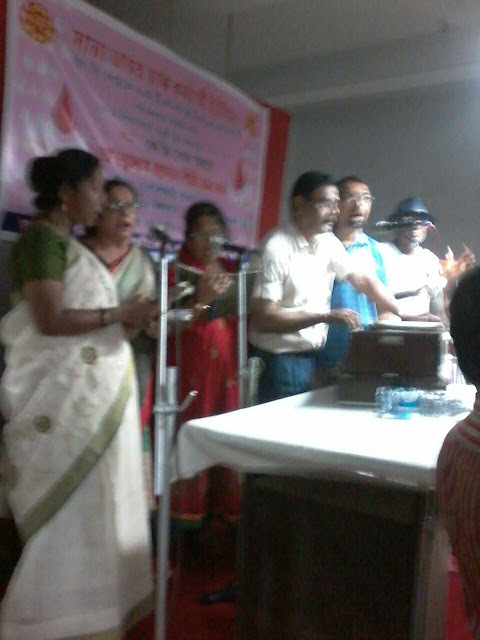 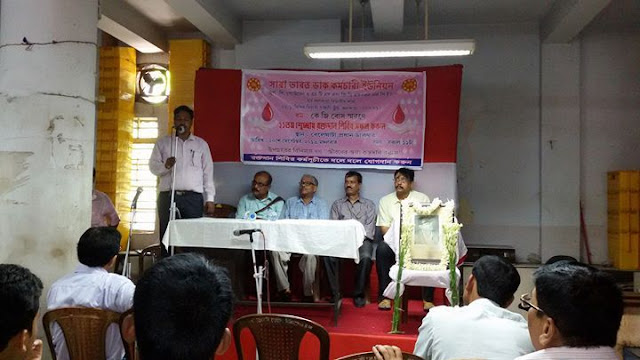 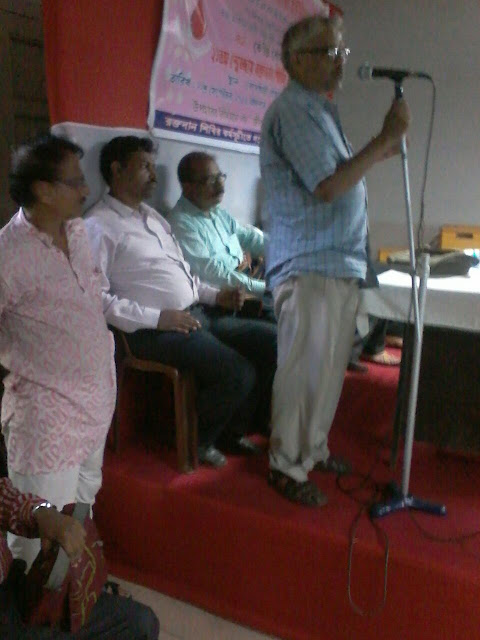 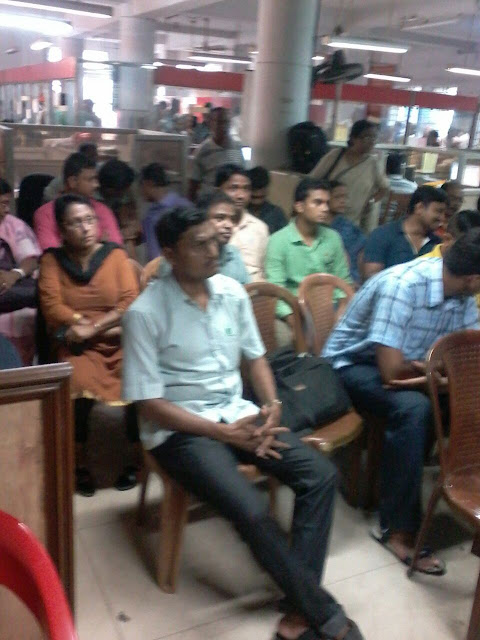 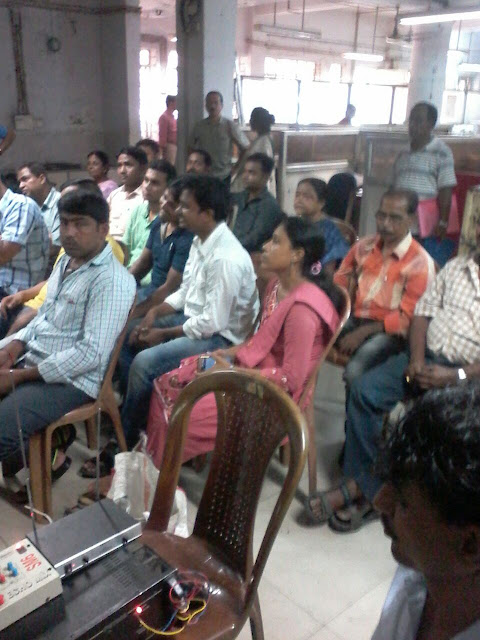 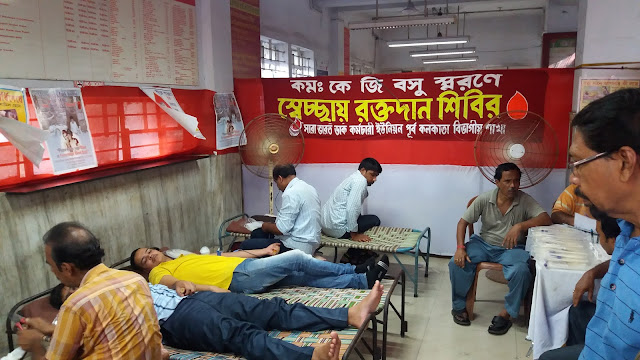 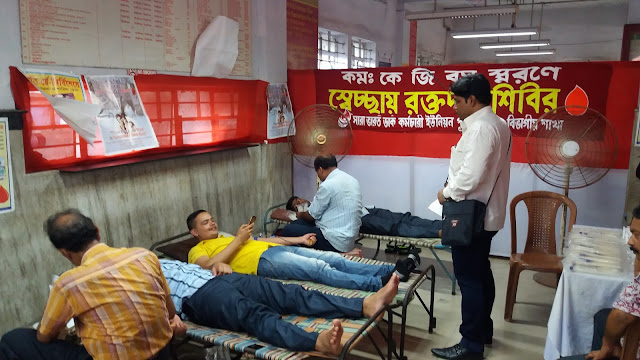 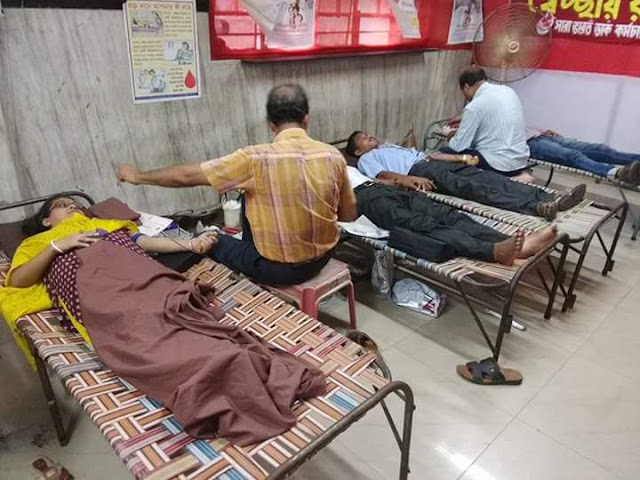 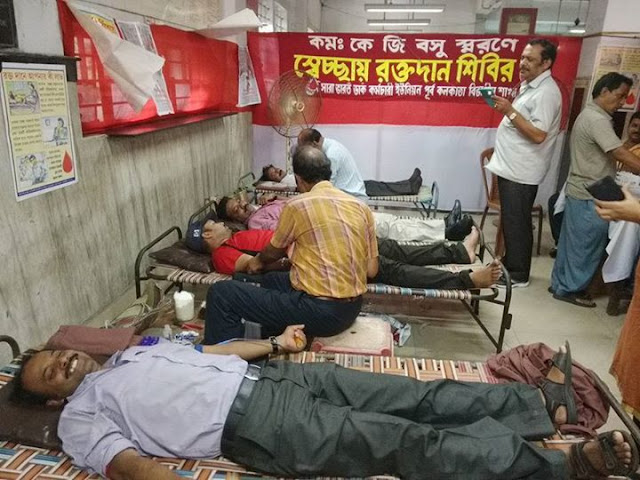 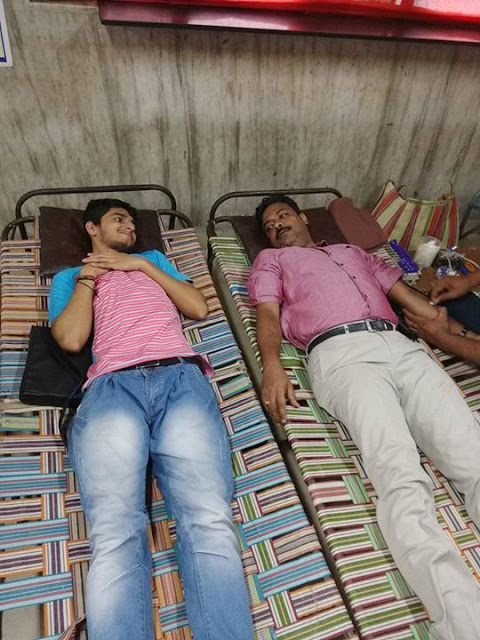 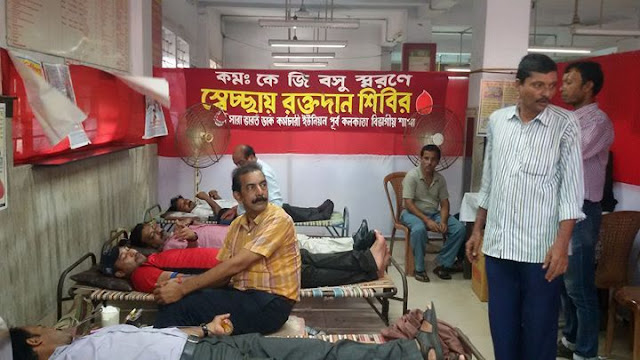 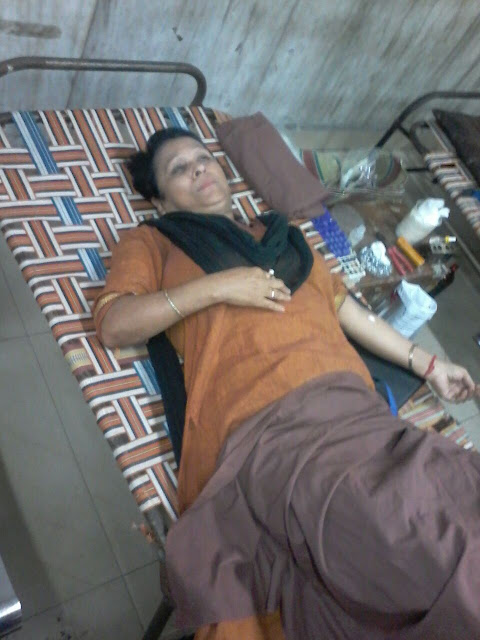 Central Govt. offices in West Bengal Circle will remain closed on 13th September instead of 12th- 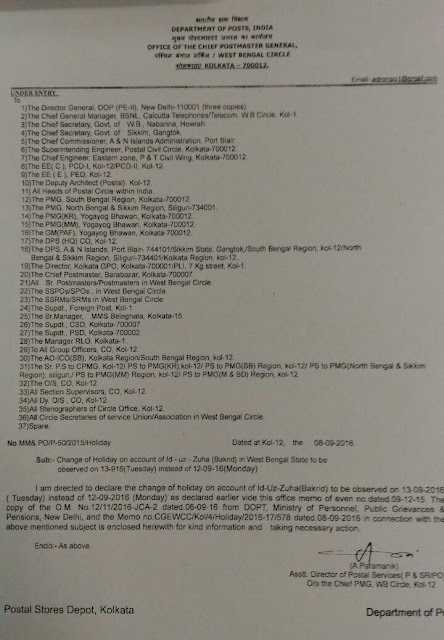 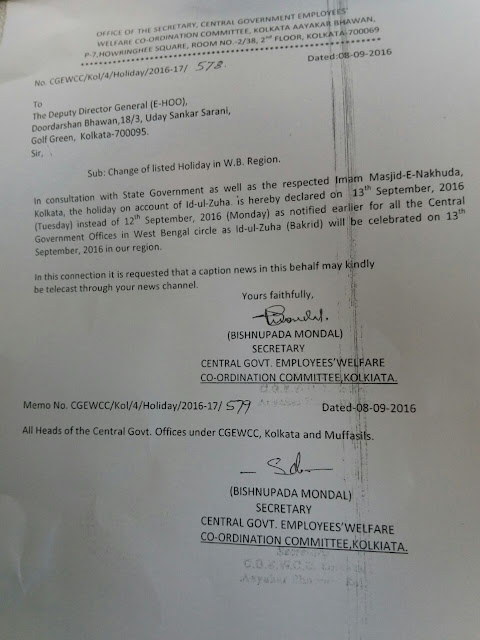 Notice regarding Circle Working Committee Meeting of AIPEU Gr. C ,W.B.Circle will be held on 17.09.2016 at Tarapada Memorial Hall. 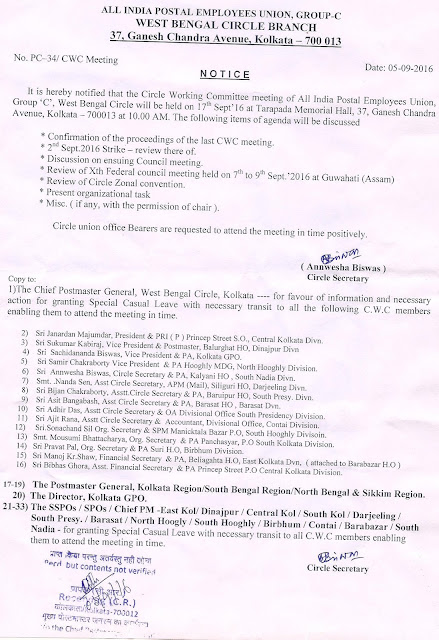 
Alas!            Alas!               Alas!
If you want self respect from your officers go strike on 2nd September. Do participate in the 2nd September strike and feel proud
Cowards only run away from the battle not sincere soldiers.
Dear Theagarajan, S/G NUPE  ---------
Thanks for your above statement.
But kindly believe that your union colligues of West Bengal Circle simply ran away from the battle field on 2nd Sept, only to satisfy the autocratic Govt. and administration at the cost of interest of common employees.

Letter to Ch.PMG FOR  GRAND OF SPECIAL CASUAL LEAVE  FOR XTH FEDERAL COUNCIL 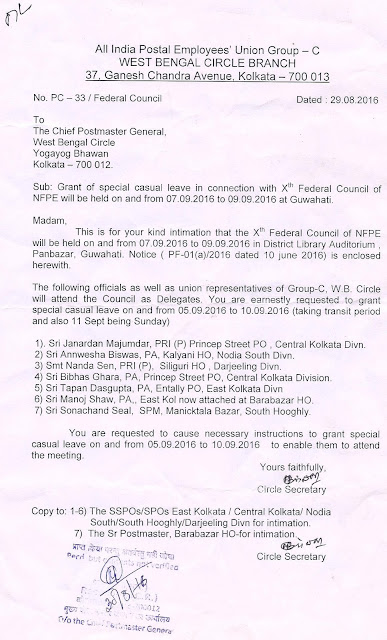 SOLDIERS  OF  NFPE  RECORDED  A  SUCCESSFUL  STRIKE  IN  WEST  BENGAL  DEFYING  BETRAYAL, THREAT  AND  PRESSURE  FROM  ADMINISTRATION, POLITICAL  ELEMENTS  AND  OTHER  UNION : COWARDS  RAN  AWAY

At the end of the day of the strike of 2nd September 2016, upon assessing the situation, the Circle Unions would like to congratulate our comrades for making it a big success taking the challenge of various external factors and threats.

About 90-95% of our staff-members participated in strike except 4-5 divisions. It was a massive strike in Yogayog Bhawan. Kolkata GPO recorded one of its exemplary strikes, while in Foreign Post and Alipore H.O. the strike was significantly better. In DA(P) the participation was 50% of the total strength, which is good considering our membership there. Our RMS Unions have confirmed that very little mail movement took place, far less than usual days.

Strike was 100% in Dinajpur Division. It stands alone as the only division in this Circle where FNPO participated in the strike as per their All India Union and Federation's decision and call.

The Postal Administration of different tiers showed extraordinary hyperactivity to break the strike. It was noticeable at Srirampore H.O., Burdwan H.O., Asansol H.O. and in some other divisions. In Central Kolkata Divn, the SSPOs took the accompaniment of ASPOs(HQ) and 2 members of FNPO and had a tour in the division to break the locks of a few offices to help breaking the strike by some employees. This is raising serious questions about the impartiality of the administration. In this situation, role of some women comrades of Central Kolkata Division was commendable. In other divisions also, the administration was aggressive. Telephone calls were made from previous day to create pressure on our comrades to keep the offices open, at some places like South Presidency, even the Inspectors called our SPMs of remote offices at 7/7-30 P.M. and asked to submit the keys to Divisional Office, though the Divl Office itself was closed down by then and those Inspectors reached home safely before making the calls.

It is very clear that the Postal Administration, some political elements, the State Govt and the Police acted in harmony plan-fully to foil the strike and split the unity of he workers. Media like ABP created pressure on our employees as well by sending their correspondents or over phone. At some divisions, they managed to succeed to force some of our comrades to enter the office. Despite that, the postal service in West Bengal was stalled, proving that NFPE still holds the key-role to the departmental functions here and conspiracy would not be the last word.

The role of FNPO in this Circle was almost completely opposite to the stand, decision and call of their apex bodies. We found that on 30th and 31st August 2016, the above Federation advocated widely and loudly for maximum participation in strike and even wrote in their blog (http://fnpohq.blogspot.in/search?updated-max=2016-09-02T23:19:00%2B05:30) --- 'If you want self respect from your officers go strike on 2nd September', 'Do Participate in the 2nd September strike and feel proud. Cowards only run away from the battle not by sincere soldiers' etc.

Indeed cowards have ran away in this circle.

Finacle was down today in the second half. A direction was circulated in all open offices to leave today and come back to office within 7 A.M. tomorrow to pull up the unfinished work. We hope that the organisation which took decision to go against their All India bodies' decision, would comply to that order happily.

Our members, who were pushed to enter the office or to keep it opened or surrendered to the administrative intrigues, are requested to rethink and gather courage, You are not alone to be vindicated, we all are with you. Please understand that administration can never be our friends, they are only acting like a tool to implement the anti-people policy of the Govt.

Amidst the situation of betrayal of one union and harmonious work by State and Departmental Administration along with Police, we hold that the strike was a huge success. We would like to congratulate ans salute our comrades for making the call of the Confederation a success here. Comrade M.Krishnan has also sent message congratulating and saluting you all for the fight. However, we shall also review this strike organisationally to find our weaknesses or lapses very shortly, so that we can prepare better for the future struggles.
Posted by AIPEU Group 'C' WB Circle at 10:44 PM No comments: