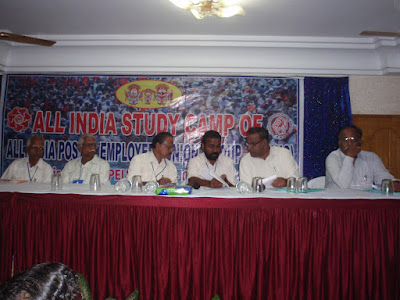 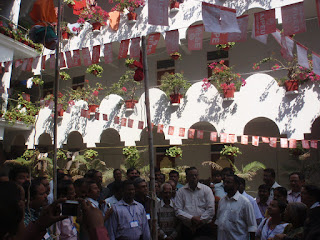 The program started on 4th at 10:30 AM with hoisting of National Flag and Red Flag of NFPE, followed by lamp lighting and garlanding leaders and guests. 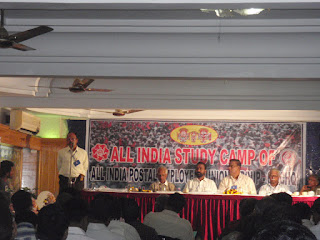 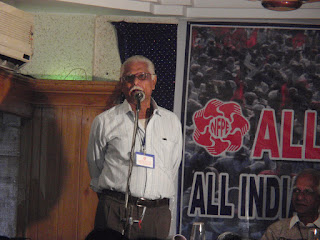 Com. M.R.Meenakshisundaram, retired supervisor, Chennai GPO and prominent Defence Assistant, was the next to deliver his topic --- 'Contributory Negligence & Disciplinary Rulings'. The veteran comrade presented the intricacies of the topic beautifully in easy language. Audience was enlightened. 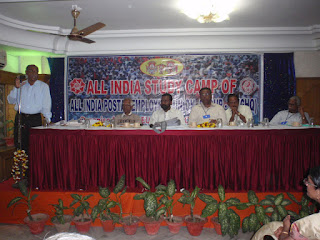 Com. M.Chandrasekharan Nair, retired SSPOs, former General Secretary, Officers' Association and Vice-President of IPOs/ASPOs Association, who always remained closely associated with movement of Postal employees, was the first speaker in the post-lunch session on 'Disciplinary Rulings: Challenges Before Trade Unions'. With the advantage of having both the experiences of a union activist and an administrator, Com. Nair spoke very effectively to explain all points and corners of his subject. Com. Nair served a brief spell in West Bengal Circle also. 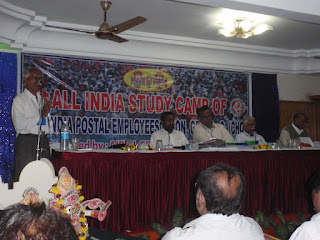 At 6:30 in the evening, Com. B.G.Tamhankar spoke on 'Use of RTI Act 2005 as a Tool for Trade Unions'. He himself is an expert user of RTI Act, and very easily transformed his knowledge to the minds of the delegates. 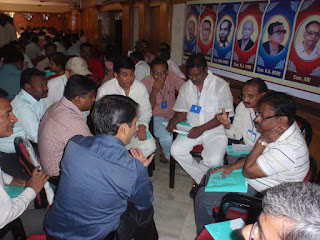 The delegates were clubbed in 12 groups having members from different circles. Each Group was given time for discussion on the delivered subjects. Then, the Interactive Session started. Each Group Leader came to the dais and asked questions and confusions. The leaders and speakers answered the questions. Everybody found this session very useful.
The session was adjourned at 11:00 PM in night. But we had to spend the night awake in reading the 100-page wonderful compilation of Rulings (also on other topics of discussion) and answering the list of 30 questions supplied by CHQ.
DAY 2
The day started with Group Discussion on the subject given to each group and finding solution to the questions related to that subject. Leader of each group presented the solutions suggested by his group, the CHQ Team explained and corrected the answers further. The delegates experienced a never-before process of interactive learning. 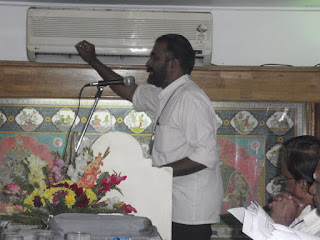 Then Com. M.Krishnan, President Gr-C CHQ and Secretary General, NFPE, spoke on 'History of Postal Trade Union Movement'. The life and work of BABU TARAPADA, father of Postal T.U. movement and founder of The Calcutta Postal Club, was relived by him. The visions and sacrifices of Com. Bhupen Ghosh, Com. K.G.Bose, Com. Adinarayana, Com. N.J.Aiyar, movements, failures and successes ---- all were discussed in detail. 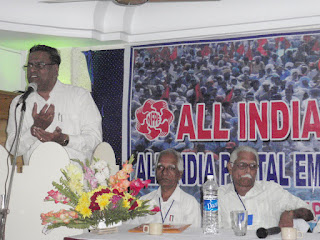 The last speaker was Com. K.V.Sridharan, General Secretary, and he spoke very briefly on 'How to Represent Cases Before Administration Citing Rules and How to Face Them'. He did not require to speak for long because already through earlier sessions and interactions, the subject was thoroughly covered.

The delegates were given a set of 50 MCQ questions again with 15 minutes to answer. Another magnificent session was experienced while the answers were discussed by Com. K.V.S.
The program ended with vote of thanks by the host divisional secretary, Com. Rajesh Bohidar, a soft-spoken, diligent and sincere soldier, who made this huge arrangement entirely in Hotel Sonali possible, with the strength of only 90 members in the small division of Puri; and speech by host Circle Secretary, Com. R.C.Mishra, an experienced veteran trade unionist. 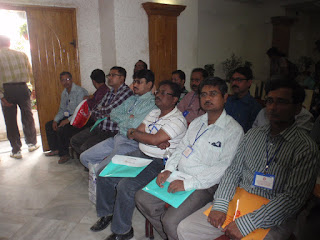 Total 176 comrades participated in the workshop, 14 from West Bengal Circle. After the program ended, our Circle Team met in an assessment meeting in their room which persisted till 2 A.M. in night. As West Bengal Circle Union is going to organise same program on 10th & 11th March at Barrackpore, North Presidency Division in presence of Com. K.V.S., the meeting discussed the participating member's roles and responsibilities.
Posted by AIPEU Group 'C' WB Circle at 1:36 AM