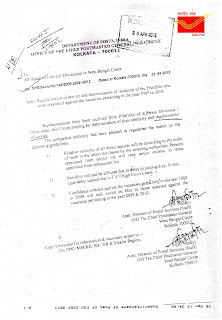 After continuous efforts and long follow-ups of the Circle Union, C.O. has finally released order acknowledging seniority of 2005-08 P.A. candidates to the P.A.s joined before them in 2009 & 2010. The CAT or High Court litigation would not pose as any factor in the way of their seniority. The very first line of the order refers to the representations of the such P.A.s from different divisions, which the Circle Union instructed on 2nd January 2012 to submit to the Chief PMG and draft was given in this blog on 3rd January 2012 (http://aipeup3wb.blogspot.in/2012/01/2005-08-p.html).
The news that Circle Union was constantly pursuing it with our Circle Head  was also published in this blog on 28th January 2012 (http://aipeup3wb.blogspot.in/2012/01/circle-union-meets-chief-pmg-com.html).
But we still congratulate the P.A.s of 2005-08 batch who despite of all propaganda remain with us in large numbers. It is their fight for rights and their unabated determination to achieve that has succeeded. Circle Union will continue to pursue for speaking orders regarding implications of this seniority and benefits of wages.
We are also thankful to our Circle Administration for realistic assessment and decision on the prayers of concerned staffs and request of our organisation for providing justice to them. This will undoubtedly strengthen our cordial relation with the Circle Administration.
Posted by AIPEU Group 'C' WB Circle at 8:45 PM