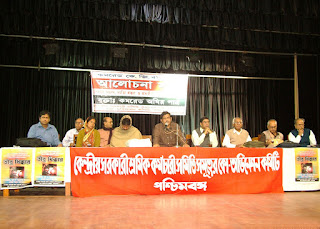 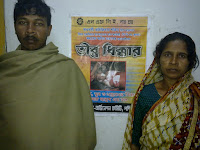 The Central Government Employees & Workers of West Bengal vouched in unanimity against the Reign of Terror and brutal killing spree of the Maoists and the political & intellectual perpetrators in the seminar convened by the C.G. Coordination Committee, West Bengal today evening at Centenary Hall, Calcutta University.

Com. Amiya Patra, leader of mass movement from Bankura, an affected district of the Maoist killings, was the speaker on the contemporary topic of  ' Terrorism, Assassination & Movement of the Working Class'. The entire hall remained spellbound by his oration and depiction of the real picture we were not aware of. His speech will be published in the next issue of 'Coordination' patrika.

Com. Shova Mondal, widow of Com. Asit Mondal, ex-BPM, Kumra B.O. who was killed on 9th December last, and their son Meghdoot Mondal were present on the dais in the seminar. The C.G. Coordiantion State Committee handed over Rs.15,ooo/-  and a blanket as a token assistance to the family where our Shahid comrade was the only earning member. Apart from taking up the case of compassionate appointment from the family by the Postal Unions, the CGCC will also take up the education expenditure of the other son who would not be granted the job.

The Coordination Committee has also declared a program of rally of all affiliated organisations on 23.12.09 from Rani Rasmoni Road / Metro Channel to College Square in protest of the murder of Com. Asit Mondal. All Comrades are requested to employ highest effort to gather maximum number of members in the rally.