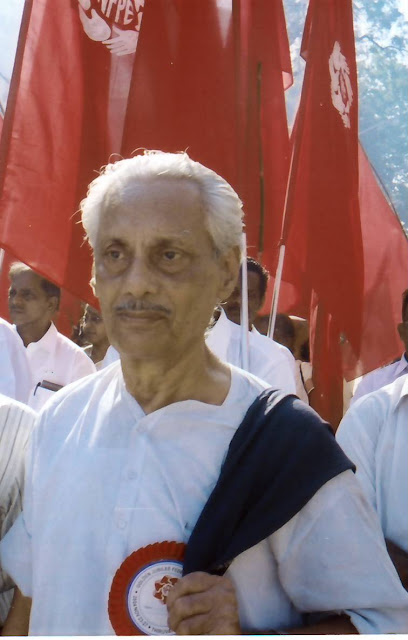 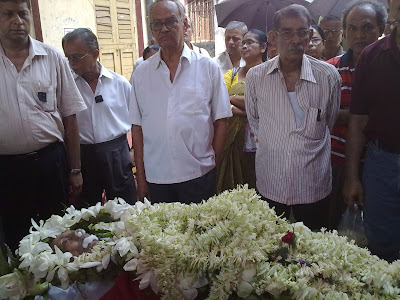 Comrade Nani Banerjee, one of the most respected and revered leaders of the Postal movement across the country and  former Deputy General Secretary of Group-C (CHQ), breathed his last this morning at about 6 A.M. in a South Kolkata Hospital near his residence at Jadabpur.
Comrade Nani Banerjee started his service career in this department in 1953 in Burdwan Division and became the Divisional Secretary in early 1960s. He was contemporary to stalwarts of P & T movement like Com. K.G.Bose, Mani Bose, A.S.Rajan, K.L.Moza. He fought valiantly during 1970s in the battle with the Central Govt when the recognition of our organisation was withdrawn and no Foreign Service was admissible. At that time CHQ could not afford to pay full salary to CHQ office bearers on Fgn service, but despite stringent financial condition, Com. Nani da did not give up and continued as the CHQ Treasurer. Later, when Com. K.L.Moza became General Secretary, he first became the Assistant General Secretary, then his rendition and contribution made him the first Deputy General Secretary of our CHQ till 1997, when he came back home due to compulsion under CCS (RSA) Rules as retired.
In West Bengal Circle, after Com. K.G.Bose's death in December 1974, he was elected as Circle Secretary, Group-C, from Circle Council in 1975. Later, when Com. Rabindra Lal Bhattacharya took over the charge as Circle Secretary, he took the charge of Organising Secretary and then, President of the Circle Union.
In 1993 Malda Circle Conference, Com. Nani Banerjee and Com. R.L.Bhattacharya both voluntarily relinquished respective charges of the Circle Union as both of them were heavily engaged at CHQ and Federation. But he continued coming to Circle Union office as long as his physical ability allowed him to.
But a sudden fall at home few years back resulted in fractures and restriction of his movement. This confinement took a toll on his mental condition also as he could not dream of living a life in bed, not seeing his comrades and monitoring daily union activities. Gradually his health deteriorated. Since last year he had to be admitted to hospital repeatedly. He was finally sent to hospital again few days back in coma stage, and could not make it any more.
The whole life of Comrade Nani Banerjee was truly an awe-inspiring tale of sacrifice. His responsibility towards his comrades did not allow him to take care of his family much, but he never repented that. Organisation, in his life, was the unquestionable priority. Hundreds of young comrades got inspired from his life and leadership and many of them are now leading our organisation at different tires. One could barely think how he disguised his strength and power of commitment behind those soft and humble words when he used to speak. We did not see many leaders these days, for whom large numbers of comrades waited at railway stations to meet while his train was passing through.
Comrade Nani Banerjee is living, and will live  with us forever. For, death can cease a breath, not an ideology, which he indeed was.
Posted by AIPEU Group 'C' WB Circle at 11:18 PM