15th STATE CONFERENCE OF CGCC, WEST BENGAL, ENDS WITH THE VOW TO FIGHT OUT THE ANTI-WORKER ANTI-PEOPLE NEO-LIBERAL POLICIES 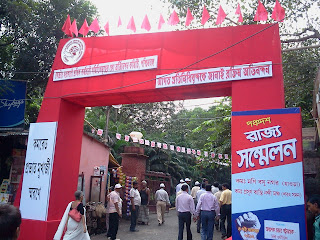 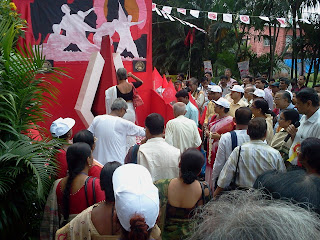 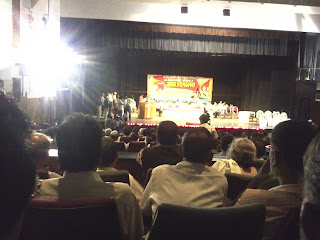 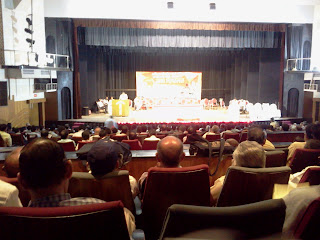 The 15th State Conference of Coordination Committee of Central Govt Employees and Workers has been held with a grand success at Sarat Sadan, Howrah, from 4th to 6th Nov 2012, followed by a State Convention of Working Women on 7th.
The conference was inaugurated by Com. Dr. Pravat Pattanayak, the eminent economist of international repute. Com. K.K.N.Kutty, Secretary General, Confederation and Com. Sukomal Sen, an international leader of trade union movements, spoke on the second day. On 6th, Com. Basudeb Acharya, M.P. and a co-fighter of the trade unionists in India addressed the house. Com. Kali Ghosh, General Secretary, C.I.T.U. also spoke on 6th. The reportings will be appearing in the upcoming issues of 'Coordination' Patrika. In the open session, the Chairperson of Howrah Municipality, who also was the President of the Reception Committee,  Com. Mamata Jaiswal and the District Sabhadhipati Com. Mina Ghosh Banerjee were present along with other leaders from Bank, Railways etc. on different dates for expressing their solidarity.
About 750 delegates and visitors attended the conference altogether belonging to all age groups, caste and creed. It was a harmony of the working class against the attacks of neo-liberal policies unleashed on the workers, employees and common people of India by the rulers of the country enslaving the capitalists. The house assessed the situation thoroughly through deliberations of 60 comrades and resolved firmly to set an unprecedented record in the ensuing strikes on 12th December 2012 and 20-21 Feb 2013.
The conference equivocally elected the following body of office-bearers of CGCC for the next term :
The Advisory Council has been constituted with following members :
Comrades Goutam Pramanik, Sumitra Goswami, Tarun Dutta, Pradip Roy and Pradi Gupta.

The report of Women's Convention will come up shortly.
Posted by AIPEU Group 'C' WB Circle at 12:49 AM