HOLD  DEMONSTRATION  IN  ALL DIVISIONS   ON  TODAY / TOMORROW  AGAINST  THE  CONSPIRACY  AND  ACTIVITIES  OF  SSPOs,  SOUTH  HOOGHLY  DIVISION  AGAINST  NFPE ---- ADOPT  &  SEND  RESOLUTION

We have already apprised our comrades of the biased, vindictive and autocratic attitude and activities of Sri Bidhan Chandra Das, SSPOs, South Hooghly Division. He is now playing the role of mentor and spokesman of FNPO unions in that division and openly advocating for their membership by all means possible. Huge numbers of charge sheet under Rule-16 & 14, FR-17(A) have been issued against our members on flimsy grounds. One comrade has been charge sheeted only for seeking information under RTI Act 2005, and the punishment order (recovery @Rs.33000/- each month for 5 months, while his gross pay is Rs.28000/- p.m.) has been challenged at High Court by our comrade.

This person is entirely communal. For the first time we are watching a communal person in the chair of a divisional head openly blurting hatred to some selected religions and condemning gods/gurus of personal beliefs.

Taking the advantage of the time of membership verification, he has unleashed severe attack on NFPE members. Our members have been approached to change membership to get relief, to avoid charge sheet or distant transfer. Some transfer orders have been challenged at court.

Circle Unions already reported the regional administration, but so far there is no visible action. As it is now the question of protecting our members and strength of the union at South Hooghly division, we cannot wait any more. We have issued a letter to the Chief PMG allowing 48 hours of time to transfer him from Serampore, and that too, not to any post of independent charge. We have also written to Com. Parashar, General Secretary, Group-C (CHQ), to take up the matter with Directorate. Both the letters are given below, comrades are requested to go through them minutely.

Now that he has declared war against NFPE, entire NFPE in West Bengal has decided to teach him a lesson of lifetime. If the C.O. fails to transfer him immediately, comrades, be prepared for the movement of strongest intensity in recent times. We cannot let one arrogant, law-ignoring officer humiliate and put NFPE down in West Bengal and tolerate suffering of our comrades endlessly.  This person is a shame on the face of our department.

Therefore, all of you are requested to hold a lunch-hour demonstration in all divisions today or tomorrow and send the resolution (text given below the letters) to the Chief PMG and PMG, South Bengal Region through fax and by post. Campaign vigorously and use this program as the preparation for a huge consolidated fight against this officer and his patrons. 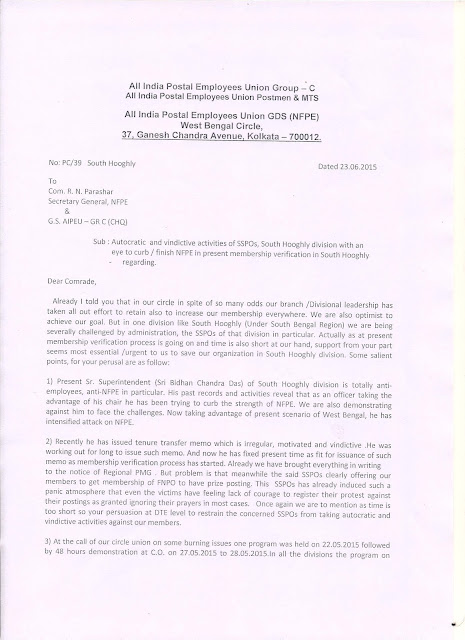 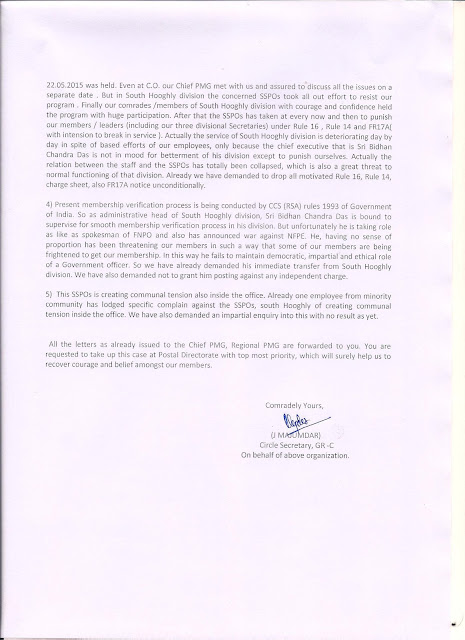 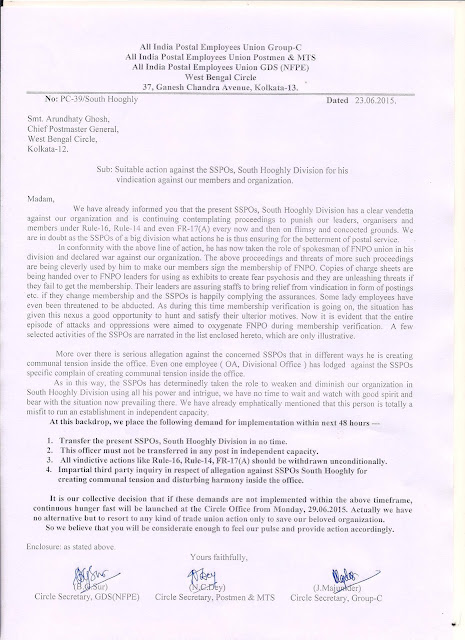 Resolution  dated
This joint demonstration of NFPE Group of Unions, ........... Divisional branch/unit unequivocally condemns the communal, biased, vindictive actions of the present SSPOs, South Hooghly Division. It is evident to this demonstration that he is abusing the scope of his chair to satisfy ulterior motive and maligned the dignity of his post. Therefore, this demonstration resolves to demand the following for immediate implementation :
Delay in implementation of the above demands will invite severe trade union movement without further notice and administration will remain responsible for all probable dislocation.