The last date for submission of authorization letters by the Union has been fixed as on or before 06.07.2015. It should be sent to the Divisional Heads. The Form for this verification is furnished. Please download.

While obtaining option and forwarding to Divisional head, please ensure that the name of the Union be mentioned as "our original name of union".
All Divisional/Branch Secretaries are requested to act swiftly at once and enroll full membership. Please explain and appraise in person to all the newly recruited comrades that issuing authorization letter in favour of more than one union shall be avoided.

Please download the form from NFPE website and Xerox it (form) as per your requirement. Please take all out efforts and protect/increase our membership. Ensure constant touch with Circle Union. If required, Circle Office bearers will move to Branch/division. 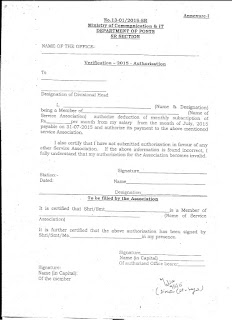 Before increasing the number of members be sure that the union is strong enough to protest against the ruthless administration, to protect the common interest of its members. At south hooghly division 90% members belong to AIPEU-GR C still all the things are going against them,from transfer memo to punishment order.So stop shouting that our union has majority in numbers and start reacting, also stop saying that the outer political environment is against us, because we are not at all CITU/INTUC affiliated, we do not have any political connection/banner, instead start taking the advantage of the political situation of this state, because if one INTUC leader can take support from the ruling political party what harm will cause to us if we seek help from them when we do not have any political affiliation with us?? Please do something, otherwise may be the number of members will increase the union will cease to grow in strength..