HUNGER-FAST  AT  C.O.  DEFERRED  ON  THE  REQUEST  OF  CIRCLE  HEAD : TO  BE  RESUMED  IF  DEMANDS  ARE  NOT  FULFILLED
As per the calls of the Circle Unions, comrades of Kolkata and neighbouring divisions assembled in large numbers in front of the chamber of the Chief PMG and on the floor to start the indefinite relay hunger-fast in the demand of transfer of Sri Bidhan Chandra Das, SSPOs, South Hooghly Division to any post without independent charge and drop all proceedings against our organisers and members in South Hooghly Division issued by him on flimsy or fake grounds out of grudge.

The previous evening we received a letter from the Chief PMG regarding this program and in response, we issued the following letter to her. 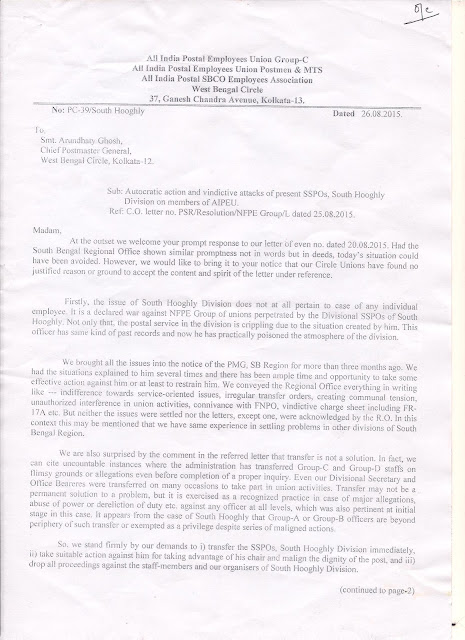 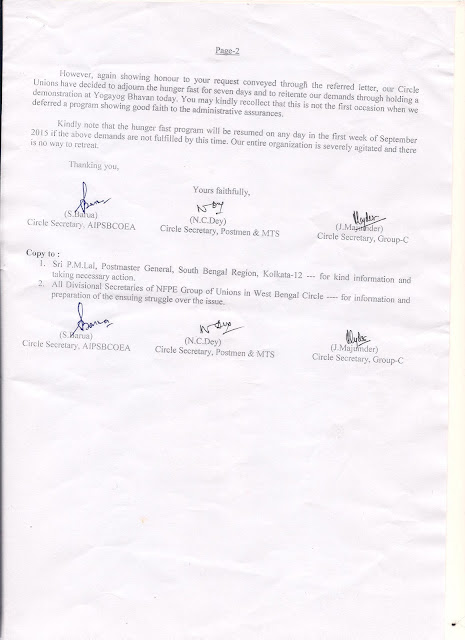 On the basis of the above letter, a discussion has been held with the Chief PMG and the Circle Unions have decided to defer the program at her request. It has been made clear that it is not possible for us to wait for indefinite time and the same program would be resumed in first week of September if the officer is not transferred by that time.

Copy of the above letter is being sent to all divisional secretaries. We are sure that comrades will not relax taking the assurance as any settlement and continue preparing for the struggle. There may be necessity to spread the program in all divisions in West Bengal. Please continue suitable preparation.
Posted by AIPEU Group 'C' WB Circle at 6:14 PM

Please stop this dirty eye wash. We are fedup of this. If u r so brave heart, please clarify... Since long why not a single demonstration is being held up at the South Hooghly Divisional Head's office door? I think your answer is very simple... ie., you don't want to let your corruptions to be digged any further and also wants to console the divisional level union with a "santwana puraskar" by way of issuing such letters so to shut their mouth for GOD sake....