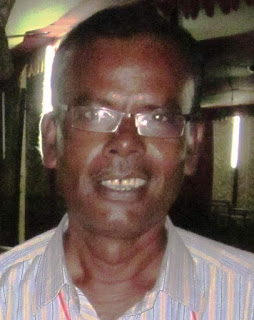 Comrade Narendranath Halder, Divisional Secretary, Postmen & MSE/Gr-D union, Nadia South Division, has passed away on 15th evening following a brief treatment after repeated cardiac arrests.
Com. Narenda, born on 1st January 1956, entered the department in GDS cadre in undivided Nadia division in the year 1979. He hailed from a indigent family but acquired expertise in English on own effort to get promoted to Postmen cadre in 1988. Being a comrade dedicated to our ideology and committed to our organisation, he took part in several Circle & All India level programs. He took the charge of Offg. Divl Secretary of P-IV in 2010 and was re-elected in 2011. In 2011 Indore AIC of P-IV, he boldly deliberated as first speaker from West Bengal Circle. He took up a great responsibility while conducting our last Circle Conference at Kalyani.
As his last program, he participated in the Study Camp of Kolkata GPO on 10-11 March 2012. He was taken to Kalyani Gandhi Hospital after sustaining a heart attack at home on 14th and was recovering there, but another massive attack on 15th evening, put a premature halt to his contributions to the class struggle. He was survived by his aged parents, wife and two sons.
West Bengal Circle Unions mourn the demise of our Narenda and the great loss to the organisation and conveys condolences to the bereaved family and comrades. Let us bear his baton ahead.
Posted by AIPEU Group 'C' WB Circle at 9:30 PM